DUBLIN – For at least half an hour at University College Dublin, hurling sticks and Gaelic footballs replaced shoulder pads and pigskins. 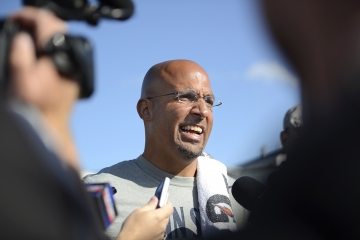 One Gaelic Athletic Association instructor, who led the Lions through a demonstration of traditional Irish games after regular practice, observed that the many 300-plus pound players who dotted the field might represent the largest people to ever hold hurling sticks.

It’s a business trip for Penn State, which opens its season Saturday with Central Florida in the Croke Park Classic. But, at least two days from kickoff, a few minutes of fun could still be had.

“This is a game,” Franklin said. “There’s some things we want them to experience when it comes to Ireland…”

A round of applause from the players assembled behind him stopped the coach’s answer. They had just learned that, before touring and eating dinner at the Guinness Factory, they would play Gaelic sports. 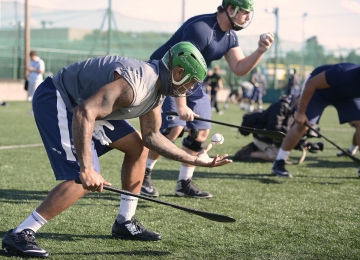 Franklin finished by saying the trip marked a time for the team to get away with its family – family now being a synonym for everyone directly involved with the Penn State program.

Some athletic staff had experienced the demonstration with Experience Gaelic Games while on a planning visit in April.

This was the first time, though, that owner Georgina Caraher had put on a demo with as many people, and ones as big as those on Penn State’s roster.

“What they would have a problem with in hurling is agility,” Caraher said. “They are super fit, but Gaelic football and hurling, it is constant action and there is a huge amount of movement.” 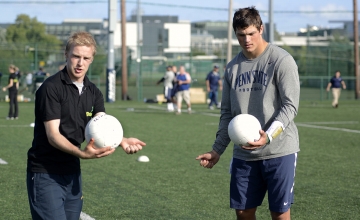 There was little to stop this group from giving it a shot, though. Running back Bill Belton was one of the first to grab a hurling stick to practice scooping the ball, and much like a touchdown celebration, freshman tight end Mike Gesicki raised his arms in joy after winning a Gaelic football passing competition.

It was day two of four the program will spend in Dublin. The program has elected not to hold a walk through practice at Croke Park despite UCF planning to do so, Franklin said, adding everything has gone according to script so far.

Penn State practiced at walk-through pace Wednesday, but turned up the speed Thursday as it went back to its regular practice schedule.

“I think the guys have had a good experience.”

Mental Health A Concern For Many At The Holidays