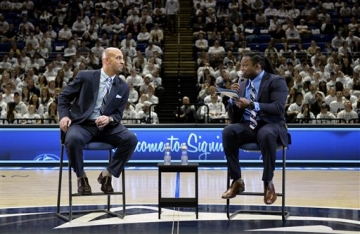 James Franklin tweets constantly, updating fans on the progress of his program, holds a Signing Day draft day like event and an event introducing his recruits, which he plans to make a yearly occurrence.

Franklin will literally talk about everything regarding anything Penn State football. There are no secrets.

His assistant coaches are all over social media sharing everything from where they went on recruiting to visits to which slice at Canyon Pizza is highly recommended, even though I never thought that was a legitimate possibility.

People have asked why they have gone to such lengths to publicize and document almost everything said and done concerning Nittany Lion football.

The answer is simple: they have to.

Penn State is still a 'divided' community in a small or large sense of the word. Not everyone is onboard with their new head coach. It’s not a product of Penn State fans, it’s a product of a coaching change. Franklin had to do the same thing when he took over Vanderbilt, maybe under a little different circumstance, though. Charlie Strong is doing the same at Texas. Brady Hoke is still trying and maybe failing to do it at Michigan.

Now, whether you agree with what went on during yesterday’s signature event, the concept was absolute genius. You get thousands of fans inside the Bryce Jordan Center for an hour and use it as a recruiting tool. Not just for incoming and future players to see, but more so for the fans.

It’s simple marketing and promotion and Franklin hit a homerun.

The judgment of the rest of the event is up to you, but that wasn’t the idea. Going over tape of each recruit was far from the point of the event. In fact, the event itself was more like putting the sprinkles on the Signing Day cake.

Franklin made the bread of the cake at 7 a.m. when all of the recruits signed and were documented via the Internet and social media during his de facto draft party. He piled on the icing during his news conference when he used the word “we” 132 times. Then put some blue and white sprinkles on during his “Signature Event”, which was pretty darn signature in terms of using it as a marketing tool.

This won’t be the last time we see something like this before now and Aug. 30, when Penn State officially begins the James Franklin era in Dublin, Ireland, against Central Florida. Quite frankly, it shouldn’t be either. Penn State fans are the most important people Franklin has to recruit between now and Aug. 30. While he may have a lot of them on board by now, they all need to be. Every single one.

107,000 strong being used as a moniker is no joke. That is the truest thing that has ever been spoken regarding Penn State football. Franklin has to have this Penn State fan base all in. Yesterday was his first opportunity to do so and it was a well-executed well-designed plan in terms of entertaining and informing the fans in attendance.

You could say that it may not sit well with current players, that shouldn’t be a worry. If it is, Franklin will have to work that out and if he can’t he has bigger issues. That won’t be an issue though. Three weeks into his tenure at Penn State Franklin has already proved why it won’t be an issue. He has a plan and he knows it’s going to work.

To date, it has. He has the design, he has the plan, now he has to execute it. But he can’t do it without the Penn State community being behind him. He can’t bring the Nittany Lion faithful into his office and ask them what’s on their mind. He can do that with his players, not with his fans.

Penn State’s “Signature Event”, was signature. It was classic marketing. If you aren’t used to that, get used to it. It’s not only happening here, it’s happening everywhere. That’s college athletics in this current age and James Franklin has absolutely dominated on that front. Oh and he brought in a pretty darn good recruiting class, too.

What’s next? Wins. If you win, everybody is happy. That concept of college football will never change.

Mike Esse is a junior majoring in broadcast journalism. To contact him, email mje5164@gmail.com.