The Chiefs showed an image of their old ways, the Rams struggled and the Cowboys reminded us that their offense is a good one to have shares in.

With your playoff picture shaping up, you are going to have to find ways to separate yourself from your opponents. You cannot change what value you found in the draft, but maybe you have struck gold from the undrafted.

With Aaron Jones missing a week or two with an MCL Sprain, Dillion will be the immediate step in for Jones.

Dillion has played second fiddle to Jones and shown that he can be effective with the touches he receives, now he’s in for a cow bell back role. Not only is he a hard runner, but he can get big chunk yardage out of the backfield.

With his ability against a soft Vikings defense, he is a must-start.

This defense that started as a liability to the team has now been a reason why they can hang with the best teams in the league. Although the Titans are not shutting out teams, they are profitable for fantasy managers.

Two of the last three games, they’ve scored a defensive touchdown, had at least four sacks in the last two games and added two fumble recoveries in total in those three games. Bottom line is that Houston gives up the most points in the league to defenses and this team is hot.

Play selection was almost 50/50 in last week’s game where the team had a total of 24 carries. The issue is that seven players recorded an attempt for the Bills, and out of the three running backs, Moss was the least effective.

Moss has not eclipsed more than 30 rushing yards in a game since Week 5. The Bills will have to beat the Colts through the air as they are tough on the ground and if anyone will take advantage of the Colts with his legs, it's Josh Allen.

Wentz has been a reliable quarterback this season, as he has walked away with 20 plus fantasy points in all but two weeks until he had his third dud of the year last week. Jonathan Taylor took over and that is one of the biggest disadvantages to Wentz, but usually there is enough scoring in this offense for Wentz to be productive.

Wentz faces a Bills defense that shut down both the Jets and Jaguars, so it is best to wait for an optimal matchup where the Colts don’t have to rely on Taylor to win.

Bateman received praise coming out of the draft for his athleticism. Due to injury, he missed the first five games of the season.

In four games, Bateman has received at least six targets in each game and produced at least 10 points in PPR formats in the last three games. Hollywood Brown and Mark Andrews are the lead pass catchers for this team, but 11 of Bateman’s 12 catches have been for first downs.

If the Ravens want to move the sticks, they’re looking for this guy.


Matthew Gelhard is a third-year majoring in broadcast journalism. To contact him, email him at mgg5264@psu.edu.

Matthew Gelhard is a senior from Mount Airy, Maryland, and is majoring in broadcast journalism. Matthew is currently a reporter and photographer for CommRadio. Matthew spent his first two years of school at Penn State Mont Alto where he worked as an Assistant in Athletic Communications and was a member of the baseball team. Matthew also has experience with play-by-play with the USCAA and writing and video for the Associated Press. Contact him at .(JavaScript must be enabled to view this email address). 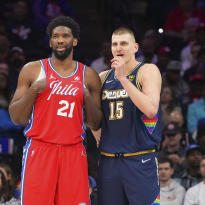