Ficken off to hot start to senior season 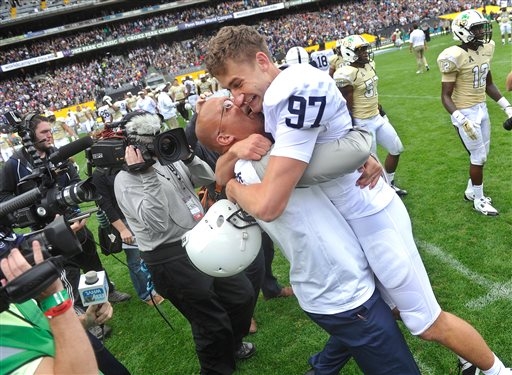 It seems like almost an eternity ago when a single game thrust Penn State kicker Sam Ficken into the spotlight.

Penn State had traveled to the University of Virginia and lost on a last second missed field goal by Ficken, his fourth missed field goal of the day. Fans and alumni alike were calling for the then-sophomore kicker to be replaced and many didn’t shy away from letting him know that on social media. Bill O’Brien, however, stuck by Ficken and he finished the 2012 season connecting on his final ten attempts.

That memory remained in the back of the minds of Penn Staters as Ficken stepped up to kick the game-winning field goal Saturday in Ireland. This time though, the result was a positive one, with the ball sailing through the uprights, giving Penn State the 26-24 win over UCF.

And just like that, the people who were denouncing him two seasons ago were now praising the senior kicker.

The 6-foot-2, 186 pound place kicker is a product of Valparaiso High School in Indiana, where he was named a first-team Class 5A all-state selection his senior year.

He didn’t see much action his freshman year, but with the transfer of kicking specialist Anthony Fera back home to Texas, Ficken was given the starting kicking job entering his sophomore season.

It was a season of ups and downs, ending with his first career game-winner, a 37-yarder to defeat Wisconsin in overtime on Senior Day. Ficken had come full circle since his struggles in Charlottesville, and he didn’t stop there.

He took time that offseason to improve his accuracy and consistency, and had a strong junior year because of it. He set a school record for consecutive field goals made with 15, and nailed a career long 54-yarder in the pouring rain against Kent State that season.

Now at the beginning of his senior year, consistency is still on the top of Ficken’s priority list.

“Week by week you have to look at film and at what you did well and what you didn’t do well,” said Ficken, a two-time Academic All-Big Ten honoree. “I was unhappy with my kickoffs but that’s something I can focus on this week.”

As Penn State moves forward with Akron this Saturday and the rest of their schedule, expect to hear Sam Ficken’s name thrown around a lot, because the senior is poised and ready for his best season yet.

Anna Pitingolo is a sophomore majoring in broadcast journalism. To contact her, please email anna.piting@gmail.com.