For the first time in 2017, the Penn State Nittany Lions played away from Beaver Stadium, and they barely escaped Iowa with a 21-19 victory on the final play of the game.

Here's what we know going forward:

1. Saquon Barkley is Penn State's only Heisman candidate. Both Barkley and quarterback Trace McSorley entered this season as Heisman hopefuls, and while McSorley's leadership remains key in offensive coordinator Joe Moorhead's attack, Barkley has set himself apart in the Heisman conversation. McSorley displayed some inconsistency early this season, including against Iowa, while Barkley has shown up with big performances in every game, especially Saturday night in Kinnick Stadium. He ignited Penn State's offense in the first quarter against the Hawkeyes with a couple of strong first down runs that put the Nittany Lions in position for their first points of the game, then proceeded to go off for the rest of the night. He carried the ball 28 times for 211 yards, caught twelve passes – most of them in the flat – for 94 yards, set the Penn State single game all-purpose yards record with 358 and broke off several highlight reel runs that will be replayed countless times later this season to make his Heisman case. If Barkley isn’t the national Heisman frontrunner at this point, he’s certainly on the short list.

2. Penn State's defense is the real deal – it’s allowed just over eight points per game this year. Iowa could barely move the ball Saturday night, and it wouldn’t have scored a single point in the first half had McSorley not set the Hawkeyes up on the Penn State 21 yard-line with a second-quarter interception. When momentum wasn’t exactly flowing Penn State’s way, the defense stepped up big. Marcus Allen’s forced fumble in the third quarter, recovered by Grant Haley, led to the Nittany Lions’ first touchdown drive of the game at a time when they were having trouble moving the ball. Troy Apke’s blocked field goal early in the fourth quarter proved decisive in Penn State’s two-point victory. The boys from Happy Valley will win a lot of games this season if the offense can get back to putting 30-plus points on the board like in the first three games, because nobody in the country will have an easy time scoring on this defense.

3. Tommy Stevens is a gimmick. While Joe Moorhead had the freedom to mess around with the playbook against Penn State’s last three opponents, Iowa is better than any of those teams and gave Penn State a close game for the first time this season. Stevens didn’t touch the ball once. If Moorhead considered involving Stevens an important part of his offense, he would have gone to him when McSorley and crew were sputtering in the first half. But he didn’t. Right now, Stevens is nothing but a decoy, forcing teams to dedicate practice time to him when they should really be focused on stopping McSorley, containing Barkley and covering Penn State’s gaggle of talented receivers.

4. James Franklin needs to work on his team’s approach to road games. Last season, Penn State went 3-2 in true road games and 3-3 if you count the Rose Bowl against USC. The Nittany Lions suffered a delay of game penalty early in the first quarter at Iowa, which was soon thereafter followed by a timeout to avoid a second one. Both seemed to be caused by poor communication in the noise at Kinnick, as was the timeout before Tyler Davis' missed 41-yard field goal in the second quarter. The thing is, the Horseshoe will be no more hospitable when Penn State visits Ohio State, and neither will be the crowd when Penn State plays at Michigan State the following week. The miscommunications Saturday night may just be jitters from Penn State’s first excursion out of Beaver Stadium this season, and they can be worked out in practice, but this will be a storyline to watch as the season wears on.

5. Saquon Barkley needs to touch the ball less. It’s true that he’s the best running back in the country and it’s true that he just broke the school record for all-purpose yards in a game, but 40 offensive touches – to say nothing of the inexplicable fact Franklin is deploying Barkley on kick returns – is just asking for an injury. Penn State nearly got just that against Iowa when Barkley hobbled off the field favoring his ankle after losing traction on a cutback. He would return to the game, but if James Franklin wants the best player in college football to stay on the field all season, he needs to tone back his usage when he can, and kick returns are a good place to start.

Tyler Olson is a sophomore majoring in broadcast journalism and political science. To contact him, email tso5043@psu.edu.

Tyler Olson is a junior majoring in broadcast journalism and political science. He is a student in Centre County Report and a news director for CommRadio. In addition, Tyler covers hockey, basketball and baseball for CommRadio and is a columnist for the Daily Collegian. 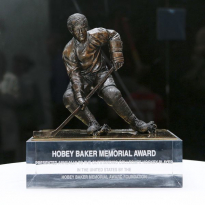