With the anniversaries of cultural important albums sprouting up each and every year, the CommRadio Arts department will be diving into albums from select years and breaking down their impact. Here are the albums from 1972. Out of the wildly popular albums that the year 1972 produced, it would be surprising to not see this particular album resting safely on the shelves of your parents’ old vinyl collection. David Bowie’s fifth studio album The Rise and Fall of Ziggy Stardust and the Spiders from Mars was released on June 14, 1972 as a concept album that tells the story of – yes - the rise and fall of Ziggy Stardust. He’s a sex-crazed alien superstar with his band, Spiders from Mars, who tells us that humanity will end in 5 years and begins to hope and pray that there are supernatural beings coming to save the Earth. It’s a bizarre, but enthralling, narrative that can only be described as pure punk-rock genius from the young Bowie, who was only 25 at the time.

Ziggy Stardust found itself within the top 10 on the UK Albums Chart in 1972 after only two weeks of its release and in February of 1973, it was in the top 5. In the US, it was at number 75 on the Billboard Top LPs & Tapes in April of 1973. The immensely popular song “Starman,” which released as a single prior to the album, was number 10 in the UK charts and number 65 in the US Billboard Hot 100 in 1972. David Bowie truly embraced his alter ego and created an innovative work of art for his fan base. The album is a glam rock masterpiece and will forever be famed as such from Bowie fans and followers of the punk rock genre in general. – Lilly Adams Yes – Close to the Edge

While many cite the work of Pink Floyd or King Crimson as the crowning achievement of progressive rock, Close to the Edge was, is and will continue to be the most successful album of the genre at capturing a grand sense of wonder. The tension built through the album never fails to crescendo in a direction that’s not only unexpected, but perfect at eliciting a pure sense of bliss. The interplay between the band members is at a peak, with guitars both acoustic and electronic trading off the melodies with the incredible synth work in a way that feels organic. This organic quality adds to the overall sense of pursuing a natural connection to the world throughout the record, with themes of seeking Zen and attaining tranquility lightly laced throughout the record’s three tracks.

While the titular track remains one of the greatest, if not the greatest, progressive rock song ever written, the album’s B-side is what helps the album work as a whole. “And You And I” trades off simpler acoustic led moments with more spaced out synth sections, crafted to bring the listener to a sense of enlightenment. “Siberian Khatru” is purposefully a divergence from the previous tracks’ transcendent qualities, doubling down on Yes’s signature complex bass work and angular guitars for a climactic end to the album.

Close to the Edge remains a landmark work in the history of rock. Its immediate, while still remaining musically complex and dense, to achieve a transcendental sound no rock act had put to record before. What Yes accomplishes on Close to the Edge continues to inspire rock acts to this day, pushing artists to blur the line between complexity and accessibility. – Chandler Copenheaver Paul Simon’s self-titled album, Paul Simon, was the second solo studio album from the artist after his split with Art Garfunkel in 1970. Released in January of 1972, the album topped the charts in countries such as the United Kingdom, Norway and Japan. It even reached number four in the United States’ Billboard Top Albums.

Simon’s album contains many catchy folk-rock songs which set the tone for the rest of his solo career. Tracks like “Me and Julio Down by the School Yard” gained critical acclaim in popular movies such as Wes Anderson’s The Royal Tenenbaums and Michael Mayer’s A Home at the End of the World. Simon even performed this song live on Sesame Street and Saturday Night Live, adding to its popularity.

This album would influence the outcome of Simon’s solo career. He exceeds expectations on albums that follow such as There Goes Rhymin’ Simon and Still Crazy After All These Years. Paul Simon continues to create music and inspire other solo folk artists to this day. – Jenna Minnig In 1972, The Rolling Stones released their tenth studio album and first double album Exile on Main Street, which created a high standard for rock artists to bring diversity into their music and diverse is the best word to describe this album. Exile is an album at the time of its release that made a statement, but was first greeted with mixed reviews, but is now regarded as The Rolling Stones’ finest album. It explores rock music with new sounds the band hadn’t done before. With its mix of rock & roll, blues, soul and country, the songs on the album are more about the band and the sound than the lyrics. Lead singer Mick Jagger’s vocals are buried over the sound of heavy guitar riffs and solos, which gives him more freedom with the lyrics that are mostly about sex, passion, time and craziness. In 2010, Exile on Main Street was remastered and expanded for a newer release and has sold over 8 million copies worldwide and ranks as The Rolling Stones fourth best-selling studio album. This timeless album is not one you can sing along with, but one you’ll always be able to jam to. - Lauren Smith With a desire to restructure his somewhat already sensational musical format, Elton John unexpectedly captivated listeners on his fifth studio album, Honky Château. The exceptional pop-rock arrangement prevalent in Honky Château ushered in a new era of exploration for the artist as he tore from the confinements that labeled him a quiet, sensitive artist. The piece in its entirety is a complete tone shift from all previous work produced by Elton John. Honky Château takes a far more energetic and lighthearted approach seemingly nonexistent in early albums like Mad Man Across the Water or Elton John. Even genuinely depressing themes covered within the album such as abandonment, discrimination and suicide are portrayed in a manner that both uniquely explores the complexity of inner emotion while still engaging the audience with upbeat melodies. Arguably one of Elton John’s most acclaimed pieces throughout his career also resides on the lineup of this album, “Rocket Man,” a truly reflexive piece divulging on the isolation Elton felt with his hastily increasing fame.

This album also introduced Elton John to a position he would soon become particularly familiar with in the following years of his career: the number one spot on the U.S. Charts. After this album was produced, Elton John famously adapted an authentic pop-rock vibrancy into his career. This adjustment instantly equated to success, as the seven albums proceeding Honky Château continued his dominance over the number one seat. This album remains the most crucial in Elton John’s career as it reinvented the artist’s style, forging an ability to lyrically and melodically challenge his audience and their previous perception of him. – JonMichael Pereira In November of 1972, Steely Dan released their debut album Can’t Buy a Thrill. Right out of the gate, Steely Dan proved to be one of the best jazz rock acts.

Steely Dan were comprised of vocalist and pianist Donald Fagen and bassist Walter Becker. Both were jazz fanatics, but never really cared for rock and roll until they heard some music from The Beatles. They met at Bard College in New York in 1967 and formed Steely Dan three years later. Their debut release just two years after that would display their knack for perfectionism in lyrics and musicality.

The album featured two of Steely Dan’s biggest singles, “Do It Again” and “Reelin’ in the Years,” which are two songs that any fan of classic rock have heard. Both songs are rightfully celebrated, but the album has many more tracks to enjoy. “Dirty Work” is an excellent tune about a one-sided relationship, featuring guest vocalist David Palmer. “Only a Fool Would Say That” is a short, but enjoyable, song with Latin influence. “Midnight Cruiser” sees drummer Jim Hodder take over on vocals. If there’s one deep cut from the album that you want to listen to, it’s “Kings,” a political song that doubles as a history lesson about some of England’s monarchs.

Overall, Can’t Buy a Thrill is excellent all throughout. Steely Dan compiles 10 of their best songs onto this record. The album would prove to be a sign of good things to come for Steely Dan, as future albums like Countdown to Ecstasy, The Royal Scam and Aja are just as revered. If you’ve never listened to this album before, you’re doing yourself an injustice. And if you have listened to this album before, well, go back, Jack, and do it again. – DJ Bauer

Jenna Minnig is a freshman majoring in Journalism. To contact her, email at jkm5756@psu.edu. 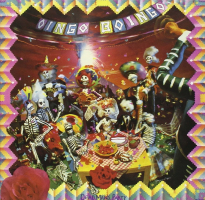