With the anniversaries of culturally important albums sprouting up each and every year, the CommRadio Arts & Entertainment Department will be diving into albums from select years and breaking down their impact. Here are the albums from 1989. 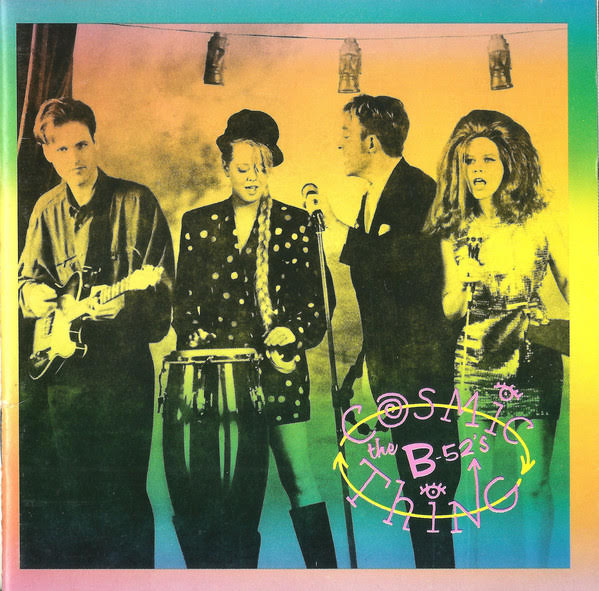 Devastated by the sudden and unexpected loss of Ricky Wilson, the group’s lead guitarist and the brother to main and back up vocalist Cindy Wilson, due to complications from the AIDS virus, the group was faced with the shocking possibility that they may never be the same again. The group drifted into seclusion after the commercial failure of their previous release “Bouncing Off The Satellites,” in order to take time to deal with the tragedy.

Unsure if they could ever make music again, the once uncontainably cheery, free love and joyous group, succumbed to a depressive and stagnant writer’s block. Departing and going their separate ways, the group took time individually to write and come to terms with the loss of their dear friend and beloved colleague.

Eventually, the group began entertaining the idea of writing music together again after a reparative and healing two-year hiatus. One of the most successful and memorable albums of their career, “Cosmic Thing” launched the group into unprecedented commercial success and breathed new life into the band.

Reemerging with a fresh yet familiar sound, The B-52’s dominated the airwaves with their quirky and artistically unconventional aesthetic. Songs such as the light-hearted and breezy “Deadbeat Club” and the joy ride infused “Roam,” held prominence over MTV and as a result received wide distribution.

The iconic and undeniably infectious “Love Shack,” named after an actual cabin in which the band had written some of their early work, quickly became the group’s signature song and skyrocketed the group to the top of the charts in several countries. Other tracks such as the paranoid and zany “Channel Z” and the album’s outlandish title track, proved to be respective underground and college radio hits as well.

The group also effectively found a perfect balance between both their wild and offbeat style and their recent tendency toward more relaxed and chilled grooves, with songs such as the captivating “Topaz” and the album’s completely instrumental closing track “Follow Your Bliss.”

An altogether innovative and entirely unique masterpiece, “Cosmic Thing” gave the group a much-needed reconnection with their lost sound and serves as a lasting statement to the healing power of music. – Scott Perdue 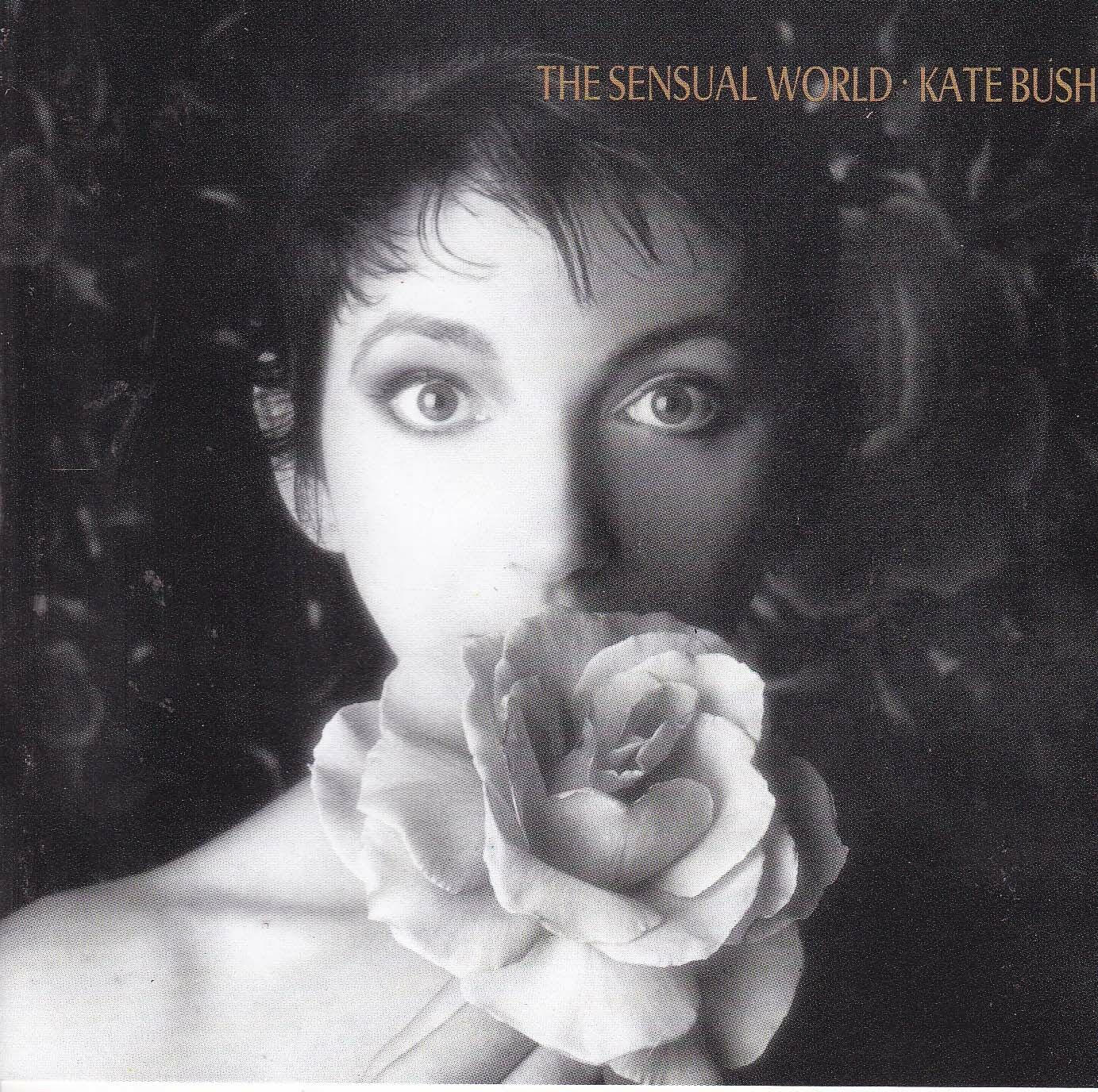 English singer and songwriter Kate Bush, a name well known in some circles and tragically unknown in others, was one of the early 70’s and 80s most influential female artists.

Coming off of the tremendous success of her album “Hounds of Love,” Bush returned once again to her proven formula of deep lyricism and infectious spirit. Releasing arguably her most intimate record to date, her sixth release “The Sensual World,” broke new ground and proved to become one of the most successful charting albums of her career.

Integrating themes from her own personal collection of cherished novels and films, as she had done with her breakout hit “Wuthering Heights,” Bush elevated her songwriting and pushed herself to unexpectedly personal and revealing lengths.

Songs such as the album’s blissful title track and the resilient “This Woman’s Work,” helped the album to receive unprecedented critical praise. Audiences and critics alike once again fell in love with Bush’s extraordinarily light and innocently fey voice, which was pleasantly lifted by her music’s relatable and uplifting messages. Other mesmerizing tracks such as the quirky “Head’s Were Dancing” and the brilliant “Love and Anger,” aided in asserting the album’s powerful and memorable direction.

Peaking at number two on the UK charts, “The Sensual World” was certified platinum in the UK and gold in the US. Closing the decade with one her strongest works yet, Bush successfully reasserted herself as an artist not to be underestimated and as a musician who knew how to please her listeners without drifting from her integrity or her own unique aesthetic. – Scott Perdue 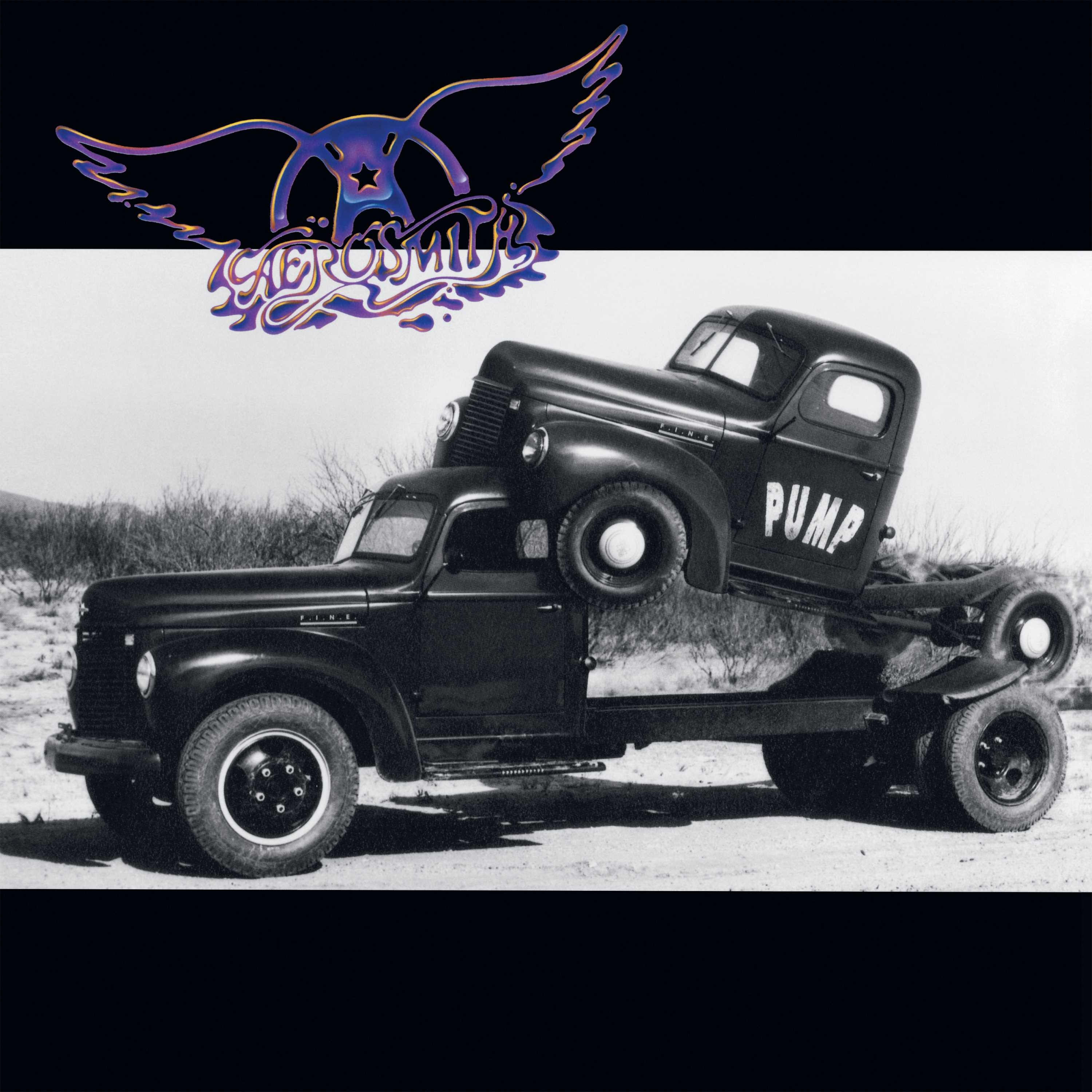 Aerosmith’s “Pump” is one of the defining albums of the band’s career. It is their 10th studio album and features some of their most popular hits such as “What It Takes,” “Love in an Elevator” and “Janie’s Got A Gun.” The album stands as a testament to the incredible, stand out the sound of Aerosmith.

Many of the band members felt that “Pump” was a break away from the conventional. Although it was one of their best selling albums, the band felt that their previous record, “Permanent Vacation,” was too commercial. Their break from the conventional is very clear. The album not only offers a raw sound but brings stripped-down lyrics front and center.

One of the most popular songs on the album, “Janie’s Got A Gun,” is about a girl who shot her father after being abused by him. The track won the group their first Grammy for Best Rock Performance by a group. Additionally, songs like “Love in an Elevator” have unapologetically open sexual lyrics.

What sets “Pump” aside from what was traditional for rock music at the time is that the album features several interludes. Many of the songs on the album are four to five minutes in length because they feature instrumental transitions between the tracks. The interludes offer smooth shifts on an otherwise raw record. It allows “Pump” to truly stand out in the rock world and remain one of Aerosmith’s best albums. - Jade Campos 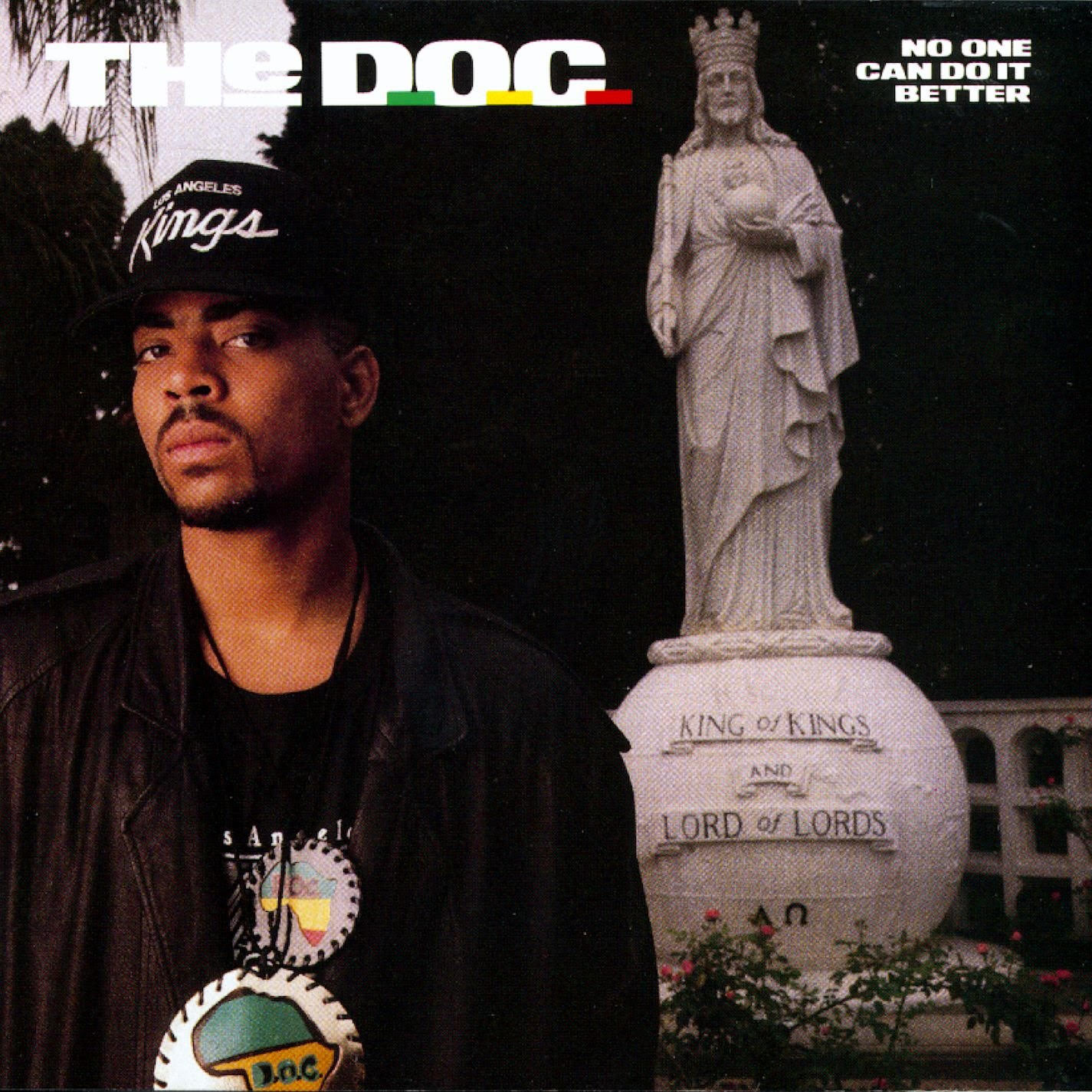 The collaboration between The D.O.C. and Dr. Dre was a perfect match, as Dre was in the midst of his prime and everything he touched on the boards turned to gold. At the same time, D.O.C. was mostly known for his behind the scenes work as a ghostwriter for Eazy-E. This combination created one of the better solo debuts in hip-hop history.

Powered by the patented G-Funk sound by Dr. Dre, the soundscape of the album can be characterized by the punchy keyboards and George Clinton samples. During this time Dr. Dre was truly at his peak as each beat from “It’s Funky Enough” to the “Grand Finale” creates a hypnotic head-nod. The tempos can speed up at any given time like on “Lend Me an Ear” and “Whirlwind Pyramid.” A good deal of the beats on this album can be found now as the soundtrack to hip-hop documentaries speaking to the importance of the sound of “No One Can Do It Better.”

Lyrically, The D.O.C. showcases the talent that made him one of the most promising rappers of all-time. His jump-out-the-speaker voice snatches attention in any year, there’s not many rappers who could’ve rapped on the beats that Dr. Dre was producing for this project and not be overlooked but D.O.C. makes his presence felt on every lyric. The lyrics “Y'all ready for this/ Rastafara Sonna Madda Fa /Drop the lyrics, a'ight /One, and here comes the two to the three and four,” from “It’s Funky Enough” are some of the most recognizable intro lyrics of all time.

Sadly, The D.O.C. was never ever to capitalize on the success of his impressive debut album, because he was in a tragic accident months after the release. He crushed his larynx, hurting his voice for future projects. D.O.C. continued to have a successful career as a writer most notable is his work on Dr. Dre’s “The Chronic” in 1992.

“No Can Do It Better” is one of the greatest debut projects in hip-hop history and The D.O.C. was one of the most talented rappers of all time. - Jerome Taylor 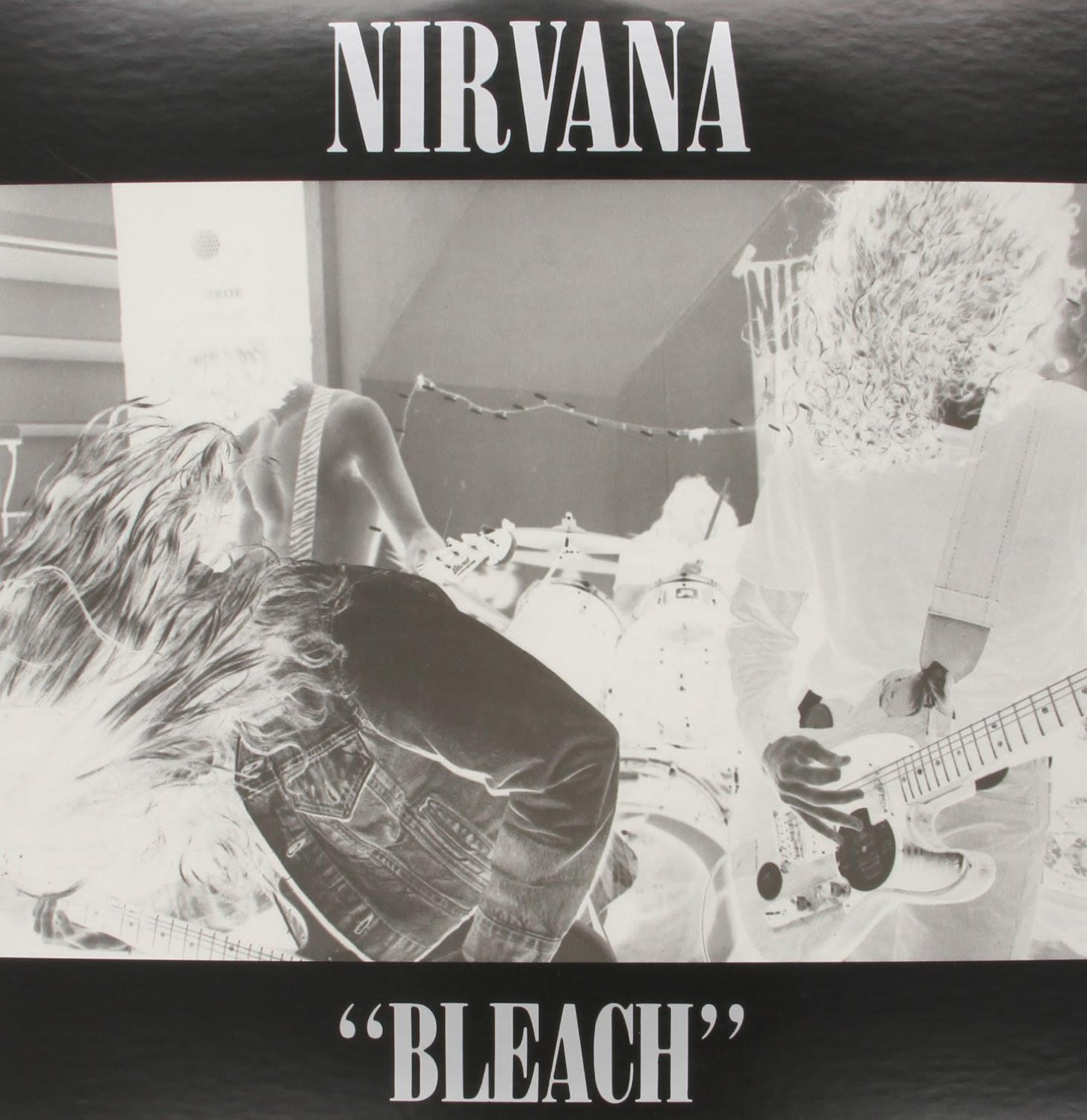 Preceding Nirvana’s rapid escalation to iconic status, “Bleach” is the band’s formative outing. Though the group had yet to break through to the cultural mainstream, their distinctive rawness and quiet/loud song dynamic were still on full display.

On “Bleach,” Nirvana’s low-fi production and angsty lyrics serve not only as the prototype for their later success but as an influential album in its own right. Interestingly, this album hits much closer to traditional rock music than it does to the experimental work on the more-celebrated “In Utero.” Nonetheless, the iconic three-piece of Kurt Cobain, Krist Novoselic, and Dave Grohl put together one of the most highly regarded underground records of the 20th century.

The catchy “About a Girl” is the track most people will recognize off the album, and it is not without merit. “About a Girl” is an exciting, youthful song with an appealing melody and lyrics that show off Kurt’s writing talent.

The following track, “School,” is distinctive due to a driving guitar riff that pulls it all together into its chaotic guitar solo. Its disdain for authority showcases the attitude and image what would shape youth culture in the 90s.

As a musical statement, “Bleach” is Nirvana at their most unpolished and streamlined. They had not yet matured into the sound they would later refine, but the talent and intent are on bold display. -Billy Jackson 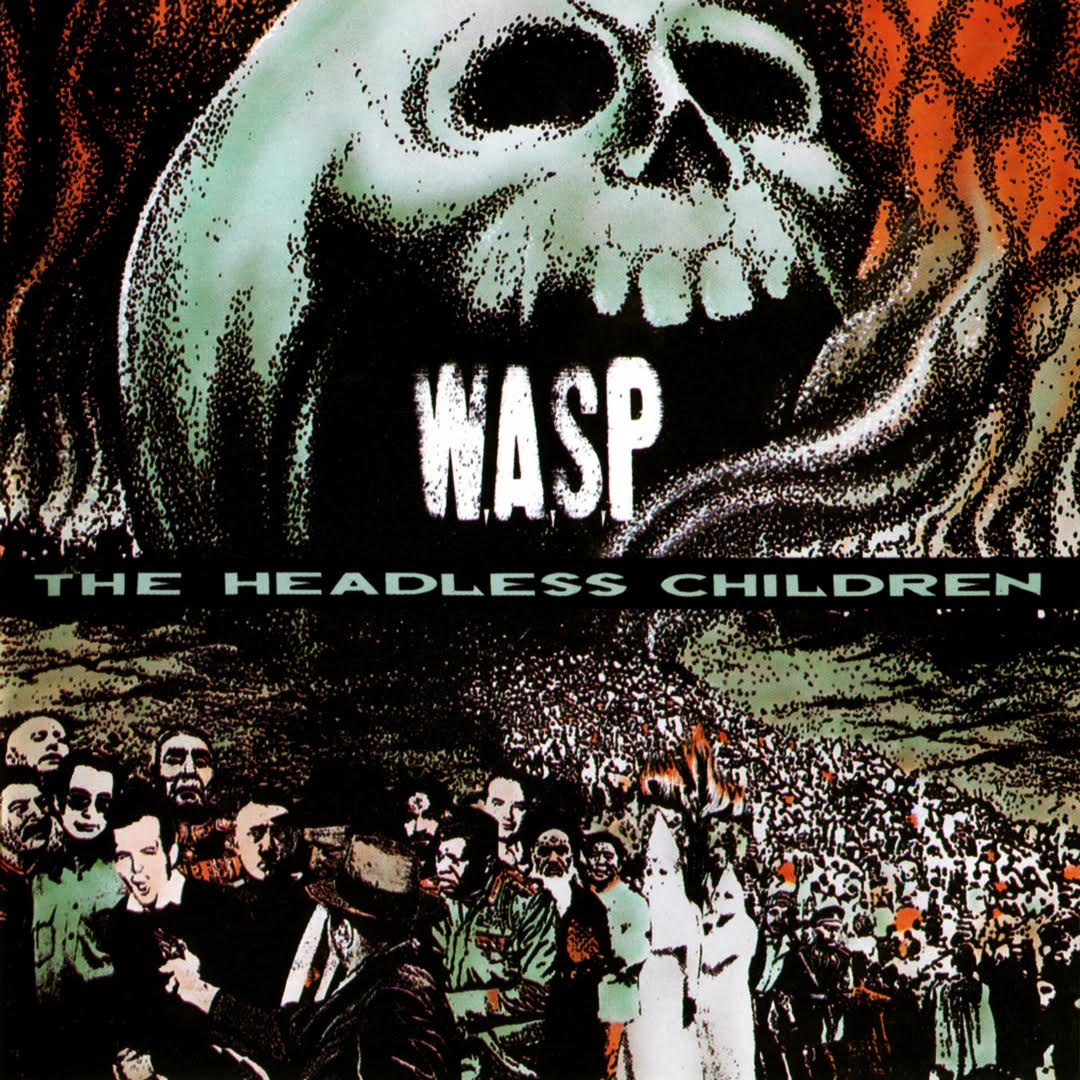 W.A.S.P. is a metal band that has undergone quite a bit of transformation through the ages. Starting in the early 80s as a sexed-out shock rock band, W.A.S.P. was as well known for their media controversies as for their music. While later iterations would shift toward industrial metal and more brutal subgenres, “The Headless Children” could be the last great gasp of classic 80s-style hair metal.

“The Headless Children” is W.A.S.P.’s critical and commercial peak, and it marked a turning point in the group’s artistic direction. While before they were content with scaring parents and creating party anthems, this album represents the culmination of singer Blackie Lawless’ growing frustration with American politics and the state of the world in 1989.

This album was a contributing factor in the US Senate’s decision to mandate parental guidance ratings on music, in part due to the inclusion of horrible historical figures on its cover. Also, drawing controversy was its macabre imagery used to depict the looming threat of nuclear devastation and the antics of guitarist Chris Holmes after the record’s release.

Despite the controversy and the outcry, “The Headless Children” stands tall among its contemporaries. Lawless used his incredible voice and lyrics to their fullest potential, belting out powerful tracks like “Thunderhead” and “The Neutron Bomber.” The titular “The Headless Children” is an anthemic metal masterpiece that does not always get the recognition it deserves.

All in all, “The Headless Children” is a rock album that takes many of the threads present throughout the decade and combines them to excellent effect. At a time when the popular music landscape was beginning to frown on the increasingly commercial metal scene, W.A.S.P. proved the genre was still able to create a buzz. - Billy Jackson

Scott Perdue is a sophomore majoring in secondary education. To contact him, email rsp5246@psu.edu.

Jade Campos is a freshman majoring in print journalism. To contact her, email jmc7727@psu.edu.

Billy Jackson is a junior majoring in film/video production. To contact him, email wjj5064@psu.edu.