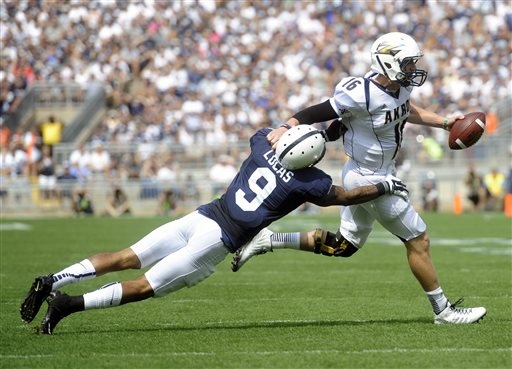 Penn State cornerback Jordan Lucas begins to take down Akron quarterback Kyle Pohl in the first quarter of the Nittany Lions' 21-3 win at Beaver Stadium. Penn State imrpoved to 2-0 with the win and travel to Rutgers on Saturday for an 8 p.m. primetime game (AP Photo/York Daily Record, Chris Dunn)

It certainly wasn’t pretty, but on a Saturday that saw the Big Ten conference as a whole embarrassed on the national scene, Penn State (2-0, 0-0 B1G) did their part knocking off Akron (1-1, 0-0 MAC) 21-3 in the team’s home opener.

Now with a showdown with Rutgers looming, let’s look back at seven things we learned this weekend before the Nittany Lions kick off the Big Ten season in Piscataway.

Shoop’s defensive philosophy resembles that of former long-time Penn State defensive coordinator Tom Bradley. Keep everything in front, don’t allow the big play and force field goal attempts when the opposing offense gets in the red zone. The “bend but don’t break” scheme was often criticized, but after seeing the defense give up so many big plays over the past two seasons, it’s a relief to see the secondary no longer getting beat over the top.

Shoop also does a great job rotating guys in and out. On numerous occasions during an Akron drive, the Nittany Lions substituted an entire defensive line keeping everyone fresh come the fourth quarter. The added depth along the line and secondary is a key difference from last season.

2) Christian Hackenberg played arguably the worst game of his young career, and still completed over 60 percent of his passes for over 300 yards and three scores. However, two critical mistakes in the red zone led to interceptions and points taken off the board for the Nittany Lions.

In throwing for 314 yards, Hackenberg tied Matt McGloin’s Penn State record for career 300+ yard passing games. With a makeshift offensive line and lack of running game, the offense is going to rely heavily on the right arm of Hackenberg. The talent is obviously there, but with four interceptions through the first two games, Hackenberg is going to need to improve on his decision making in order for the offense to be successful.

3) One way or another, James Franklin and offensive coordinator John Donovan are going to have to find a way to get the ground game going. Penn State is averaging just over 80 yards per game rushing and the line has struggled mightily to get any sort of push up front.

Right now, they have no identity while trying to run the football. Slow developing, misdirection plays with a 240-pound running back and subpar offensive line is not going to cut it. Both Zach Zwinak and Bill Belton look indecisive and rarely get to the line of scrimmage without being touched.

In the second half, they found some success with Akeel Lynch running the Wildcat, but the Zips picked up on it quickly. Moving forward, a respectable ground game is vital in order to open up the passing game because it forces the defense to respect the play action, which is a very important part of this offense.

4) Isn’t it nice to see Penn State be able to punt the ball without the threat of a return every time? Sophomore Chris Gulla has stepped into the punter role nicely averaging nearly 50 yards per punt Saturday against Akron.

Gulla, a former soccer play in high school, does a great job of angling punts towards the sideline, making coverage easier as the sideline can be used as an additional defender. Outside of one 13-yard return by Imani Williams, Akron got nothing in the punt return game, a far cry from what Penn State fans have witnessed over the past few seasons.

5) Jesse James is a player, plain and simple. The junior tight end bolstered his NFL resume hauling in two touchdown receptions for the first time in his career.

At 6-foot-7 and 260 pounds, James has the size and speed that NFL teams look for in a receiving tight end. He demonstrated both of those qualities in the two touchdown catches. The first came on a 13-yard reception where he carried three Akron defenders into the end zone after initially being contacted at the 3-yard line. And the second came after he beat the linebacker in coverage down the left sideline for a 44-yard score.

No doubt, DaeSean Hamilton and Geno Lewis have proved themselves has viable receiving threats, but look for James to potentially grow into Hackenberg’s number one target as the season progresses.

6) Jordan Lucas is slowing cementing himself as one of the premier defensive backs in the Big Ten. Lucas finished with seven tackles from the cornerback position including a crucial sack on third down that forced a punt.

Many saw the potential in Lucas last year when he was named an honorable mention All-Big Ten selection, but he has taken his game to a new level this year. He doesn’t miss tackles in the open field, and is as physical as they come in the secondary. If one of Trevor Williams or Grant Haley can lock down the other cornerback spot, the Nittany Lions will possess one of the top defensive back corps in the conference.

7) There’s no way around it, the Big Ten had a bad, bad weekend. Nebraska needed a last second score to beat lowly McNeese State at home, Ohio State got upended by Virginia Tech at the ‘Shoe, Michigan was shutout in their last scheduled meeting with Notre Dame, and despite a promising opening, Michigan State was run off the field by Oregon in Eugene.

It appears that the Big Ten will be shutout from the inaugural College Football Playoff, and this weekend certainly doesn’t bode well for the conference’s current image.

With the second “Mitchell Report” set to be released today, Penn State has an outside shot of possibly being able to compete in a bowl game and/or Big Ten championship game. Though unlikely, the Nittany Lions at this point might be the conference’s best bet at running the table. That’s a sad state of affairs for Jim Delaney and the Big Ten conference.

Matt Lawrence is a senior majoring in broadcast journalism and economics. To contact him, email mdl030293@gmail.com.

Matt Lawrence is a senior majoring in broadcast journalism and economics. He is also the Chief Editor of ComRadio. Upon graduating in May, Matt would ultimately like to work in the front office of a professional sports team and play a role in the everyday functions of the franchise. To contact him, email .(JavaScript must be enabled to view this email address).