A Music Maker And A Storyteller

Life of a Competitive Gamer

A Girl And Her Sax

The Storytelling Behind Composing Music 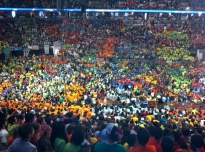