Yanisa Kongsiri (Miley) is a senior from Bangkok, Thailand majoring in broadcast journalism with a minor in the Korean language. Miley is a highly versatile, resilient, and motivated individual. She spent the past two summers as a production intern at the Ellen Degeneres Show and at LVMH Christian Dior Perfume and Cosmetics. During her internship, she worked on the set of Ellen and Ellen’s Game of Games. At LVMH, she helped produce the storyboard for Nicole Portman’s advertisement for Dior’s Miss Dior perfume. Upon graduating, she hopes to work in the entertainment realm of production on different television shows. 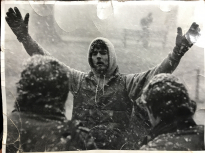 Behind The Red Hoodie

A Passion For Dance