Mark is a Penn State student who will be graduating in May 2015 with a Baccalaureate degree in Broadcast Journalism and a minor in Kinesiology. He had a talk show with ComRadio at Penn State called the Mike and Mark show. He also had experience writing articles for the ComRadio station, called play-by-play for various sports and cut sound for the weekly radio shows. He also worked various jobs at Penn State University including the Penn State Libraries, HUB Robeson center and personal training for Penn State Strength and Fitness. He hopes to find a job in the sports or fitness world after school.

People and their Passion

Election 2014 in video and pictures: Afternoon 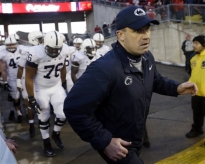 Penn State in the NFL: Week 11