Nasser Monayair, '14, is a senior from New York, NY. He is a broadcast journalism major at the college of communications at Penn State University. He's a co-host for a Com Radio show “Empire State Boys”. Nasser, has worked and written articles since he was in high school. Nasser is also a member of John Curley Center for Sports Journalism. He has experience in radio prior to joining Com Radio. Nasser hopes to continue his career in radio and hopes to host his own sports show which will cover all sports topics including a few of his favorite teams such as the New York Knicks, New York Giants and New York Rangers. Nasser also enjoys listening to broadcasters such as Marv Albert, Michael Kay and Scott Van Pelt.

More than a Game 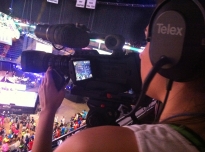 Column: Time for Frazier to be a Floor General