Nicole is a senior at Penn State who will be graduating in May 2015 with a Baccalaureate degree in Public Relations with minors in Business and Entrepreneurship Innovation. During her college career Nicole has been a very active member of The Penn State Thespians and has been the chair person for their production of MasquerAIDS for both the 2012/2013 and 2013/2014 school years. Nicole has also been involved in Valley Magazine and the College of Communications student council. She also works part time at Nittany Notes in State College, PA. This past summer she interned at The Star Group, a communications agency in Philadelphia, PA., where she learned several new public relations skills. Before this internship she had also used public relations loosely during her internships at The Bryce Jordan Center and Beasley Broadcast Group. Upon graduating Nicole hopes to find a position that will challenge her and allow her to interact with interesting people every day. 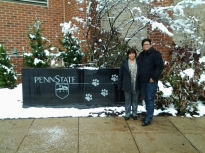 A Passion For Paint

A Passion For Painting

If The World Were to End Soon

Election 2014 in video and pictures: Afternoon