Girls with big voices and even bigger dreams have been singing, ‘their entire lives.’  Atisha and Nishita Lulla form the sister singing duo the LullaNAs. 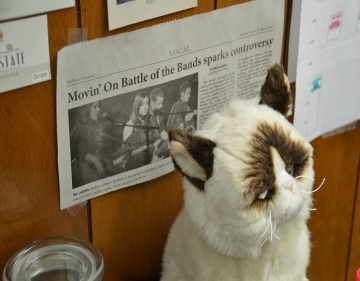 According to the twins the first time they felt the rush of performing was during their high school senior talent show. Though they lost out to a Lady Gaga impersonator it did not deter them from becoming serious about a future as singers. In order to pursue their dreams of stardom they needed to expand their area of exposure. In today's area of social media there is no better way for up and coming singers to get their voices out than YouTube. The LullaNAs have a channel that revives thousands of views and subscribers looking for the twins’ covers of various artists.

Even though music is their main focus and passion Atisha and Nish are pursing degrees in Communications Arts and Sciences and in Business. Both will graduate this May from their respective colleges. With diplomas in hand the girls will have only 365 days to make their passion into a career. One year. That's it to make a tenacious go of their dreams. When prompted about the upcoming year Nish says that they plan on moving to New York to better network and get their foot in the door. With the support of their friends and family as well as their loyal subscribers the LullaNas feel confident about the next year.

Though the majority of content on their channel is covers of popular music such as the Lumineers and Taylor Swift, the LullaNAs have started writing their own music and have even performed it live for State College audiences. In the four years since their talent show the twins have performed all over Pennsylvania and even in some local Penn State bars to earn the support of their peers. "I feel more comfortable when I recognize people in the audience. I also like when I can see people singing along with us and the best is when it's our own stuff."

Atisha who spends a lot of her free time thinking of song lyrics says, "I love when people come up to me and ask where I can purchase the songs they just heard. I usually just say that the songs aren't out yet but we're getting there."

Clearly the passion and talent is prominent in each part of the duo but the deadline still hangs over their head. When asked where they would want to be in a year Atisha responded with "We hope to have an EP recorded and hopefully doing the rounds to get our music out there." Nish also chimed in with her interest of touring and meeting all different types of people and sharing their music with them.

Interviewing both Atisha and Nish you can clearly see how well they are able to balance each other out. One elaborates the others thoughts or they can add onto what the other had left off, but no matter what the underlying theme is that music is their passion. They present a united front when it comes to their music and goals, which bodes well for the future because they are both determined to hit New York with everything they have.

Video: The twins give an impromptu performance

One of their favorite songs is 'Hey Ho' by by The Lumineers.

I am currently a senior at Penn State majoring in Broadcast Journalism with a minor in Business. With the skills I’ve learned over the last four years I will pursue a career in Sports Journalism.

Before the Magic Happens