Nicole Robles is a normal college student from a normal family but what is special about her is the transition she’s undertaking now—to become a vegetarian. 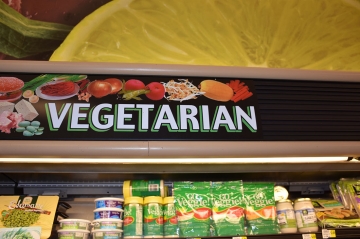 The vegetarian area at Weis that Nicole Robles usually does shopping at.

Robles said it was really hard to get rid of all the meat and animal products because of her family background. Her mom is from Italy so every Thanksgiving, she would prepare a meatball feast for the family. “It is impossible to refuse her,” Robles said.

But as an animal lover, especially after witnessing people killing and eating animals on the media, she decided to make a difference. She believes the process is all about moderation, cutting down the meat intake slowly and limiting herself. Being a vegetarian is not an extreme lifestyle change so people should be flexible and adjust it to their own lifestyle, she said.

When she started doing this, she began with cutting down beef and pork. Right now, she doesn’t drink milk, barely eats eggs and tries to stay away from dairy. Instead, gets her protein from beans and soy products and keeps them all natural. 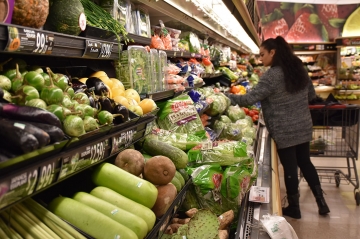 Robles is shopping at Weis.

Living in State College which lacks restaurants serving vegetarian foods, Robles said that cooking has become one of the biggest challenges since it takes up a lot of her time. So she usually eats simply by mixing chopped vegetables, sauce and rice together.

Robles faces another difficulty whenever she eats out with friends who are not vegetarians. She said she needs to grab some food and snacks beforehand just in case there aren’t vegetarian diets available for her.

By setting up herself as an example, Robles said she wants to introduce a better and healthier living style to her family and friends.

Nicole Robles grew up at an Italian household and she said it was really hard to turn down traditional meat dishes prepard by her mom.

I am interested in taking videos and doing creative jobs. I always have passion doing new work.