Three years ago, Bobby and Brenda Steiger saw a long, difficult journey finally pay off. The family of three suddenly became a family of five when they welcomed Ty Xavier and Zoah Alexandra into their home in rural Centre Hall, Pennsylania.

The journey began with Bobby and Brenda taking in two foster kids. They wanted a larger family but decided that they didn't want to go back to the 'diaper stage'. They were given a three year old girl and were asked if they would be willing to take in her six month old brother. They didn't want to turn him away and separate the children, so they agreed. They parented these children for 10 months until they were returned to a family member.

Despite the disappointment of not being able to keep the children, Bobby, Brenda and their son Dillon made the decision that they still wanted a bigger family. After speaking with an adoption agency, they decided to try to adopt internationally because of the astounding number of children in orphanages over seas who needed homes.

The Steigers left Pennsylvania for New York and eventually Russia. It was an environment that was out of their comfort zone and one that they had to get used to.

"When we got there to the orphanage, it was just the most humbling experience ever," Brenda said. "It just made you think of our own land and what we have and what we could provide."

The documentation that had to be completed seemed endless. They had to speak with attorneys, doctors, accountants and the Pennsylvania Apostille in Harrisburg. Bobby and Brenda needed to get physicals a total of five times during the process. There were even inspections to assess whether or not the Steigers had a home and a lifestyle fit for adopting children.

"It was very humbling, and it was tiring," Brenda said. "The one thing that gave us grace to get through it was speaking with parents and families that had been through it already."

The whole process ended up taking well into a year. In November 2010, the children finally came to the United States with the Steigers. 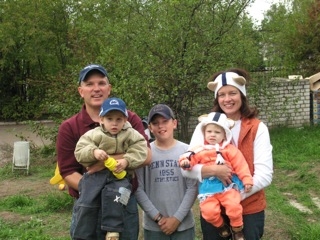 The technical aspect of the adoption was completed but then came the task of adjusting the children to life in a completely different environment. There were obvious communication issues in which the family brought in speech therapists to move the process along. The biggest challenge was showing the children that what they have is actually theirs. They were used to sharing their belongings with an entire orphanage and didn't initially understand the different lifestyle.

After three months of intense speech therapy, the children were able to speak English and now three years later, much of the normalcy that the family had before they began the process has returned to their lives.

Ty and Zoah were fortunate to be adopted by a family who can give them a better future. Many other orphans in Russia will not have the same opportunities. In January, a ban took effect which restricts international adoption with the United States. It's unclear how long this ban will stand but the Steigers are very thankful that they were able to bring the children into their family before it was too late.

The Steigers had no idea what was waiting ahead when they decided to adopt two young children from a foreign land, but despite the many roadblocks, they couldn't have hoped for a better result. This slideshow features pictures made by the Steigers:

There's no doubt that the children have a long way to go before they can move on from the difficulties they faced in their first few years in Russia, but the Steigers have without a doubt given them so much more than they could have ever hoped for.

Jason is a senior at Penn State majoring in Broadcast Journalism. He is currently in his eighth and final semester as a student with ComRadio and has enjoyed every aspect of sports broadcasting. He is currently a co-host of The Fifth Quarter and 60-Minute Misconduct. His most memorable moments to this point are speaking with his favorite broadcaster, Mike ‘Doc’ Emrick on his talk show and broadcasting a Penn State football game. Jason takes part in various sports broadcasts with ComRadio and has been a staff member of the yearly NFL Draft Show as well as the Selection Sunday Show. Jason is also a member of the John Curley Center For Sports Journalism. After graduation, Jason plans to move to Pittsburgh and get a job in his favorite city.

An evening at Ken’s Best Wurst