“It’s going to be heartbreaking after a year and half,” said Yvette Elizabeth Gramignano, who has been training a service dog named Parm. They are always together. To class, to the grocery store, everywhere Gramignano goes, Parm is close behind. 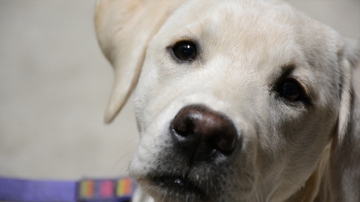 "Whenver she looks at me, her eyes are just beautiful." (Photo by Yibai Tan)

Gramingnano, a Penn State junior and animal science major, has devoted a great amount of her time training Parm, a Labrador retriever, and has enjoyed her job as a Susquehanna Service Dogs volunteer.

Susquehanna Service Dogs raises and trains dogs to assist children and adults with disabilities to become more independent. After running for 12 years, it already has over 190 volunteers throughout Pennsylvania. Gramignano is one of them. She’s been an animal-lover since childhood and enjoys interacting with all kinds of animals. 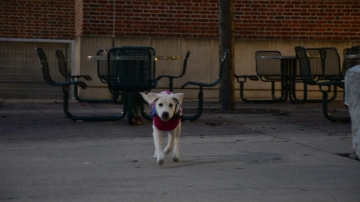 Her passion influenced her to become an animal science major at Penn State, where she had the opportunity to start training Parm at the beginning of the semester. Gramignano trains Parm at home as well as on campus. All instruction is done step by step. Whenever Parm finishes a command, she hears a click and gets a treat so she subconsciously associates the command with the stimulation of getting a treat. Even though Gramignano bears the responsibilities to do the training, she says she feels more of a best friend than just a trainer because she enjoys the time being with Parm as a stress-reliever and a break from schoolwork burdens.

However, after a year and half, the two best friends will separate when Parm becomes a certified service dog. “We will both have a hard time leaving each other”, Gramignano said.

But she says her love for animals will continue, because she has been dreamed about being a zookeeper and trainer since she was a kid and wants to truly get hands on experience with all animals.

She says that working with animals is the best job in the world.

Another Possibility for Parm

After a year and half with Gramignano, Parm will go back to Susquehanna Service Dogs to see if she can pass as a certified service dog. If not, families on the waitlist have the opportunity to adopt the dog.

Always enthusiastic about news, always ready for news.
I had internship experiences in two of the largest broadcast stations both in mainland China and HongKong.