Penn State Senior Kierstin Dawes will be graduating with a degree in Animal Science this May. In addition to her major courses, part-time job, and extracurricular activities, Dawes has devoted her time as a “puppy sitter” for the Susquehanna Service Dogs program.

Motivated to one day earn her certification as a “puppy trainer”, Dawes works with many of the service dogs going through their training process. She refers to herself as the “puppy nanny”— a right-hand woman to any puppy trainers who need her help. Dawes makes herself available to many of the puppies in the program, including seven-month-old Syrah. 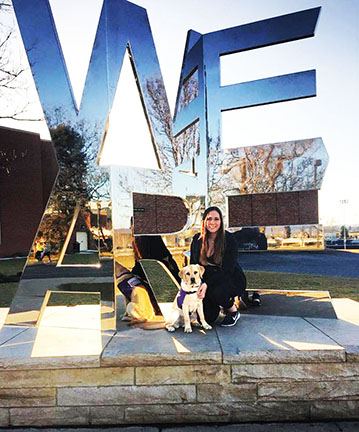 At the point of certification, these dogs will be able to help individuals with mobility disabilities, PTSD, anxiety disorders, visual impairment, and even diabetes.

Dawes says that although the role of a service dog may seem a bit tyrannical, these puppies are able to play as much as any other. However, when called to attention, they are obediently able to shift gears into work mode, or as Dawes defines it, “the zone.”

Among her many duties, Dawes is expected to assistant train these puppies using classical conditioning techniques. She says she is confident in the effectiveness of this method, through which the puppies are rewarded for correctly responding to commands. Although these commands begin with simple tasks, such as sitting, heeling, or lying down, Dawes says that they become more complex as the puppies progress through training.

Janae is a broadcast journalism and psychology dual major with a passion for connecting with her audience. She is a former PR intern for “O, The Oprah Magazine” and entertainment host for Penn State’s “Hollywood Now”. After graduating in May 2016, Janae hopes to take her communication skills and intimate level of understanding for others to the professional world as a powerful and moving storyteller.