A Place for Everyone


Sharon Schafer has always had a passion for farming and working within agriculture. She worked for years at a supported agriculture farm where she saw a vast amount of food go to waste and not go to market. She started a conversation with the owners, where they sorted out a plan to find a way to utilize the unused produce. 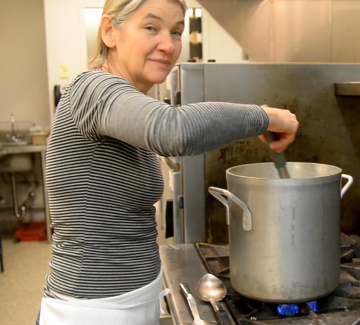 While this was occurring, Schafer’s son, who has intellectual disabilities, was  edging closer to high school graduation. For him, he was totally integrated in the school, but that was about to change. There is still a large  amount of work to do to get him integrated into adult life because there are not likely to be fully employed.

Schafer started to attend transition conferences for her son, where she learned it was going to take more than government spending and professional workers to help people with intellectual disabilities. People need to create communities. Communities that help develop friendship, life skills, and a sense of work.

After watching a few films on the restorative work farming together has on communities she decided to help co-found Taproot Kitchen.

“I love local food,” Schafer said. “I love the idea of people being really connected  to their communities through it. And I thought that all came together, and what we really need is something in the local food industry that includes people with intellectual disabilities.”

Taproot Kitchen is a non-profit catering company that brings together local unused produce and job seekers who want to either learn skills, or engage in their community. The team consists of a broad group of people, most of which have intellectual disabilities. According to Schafer, 30 to 40 percent of food is going to  waste in America, and Schafer wants to tackle that problem on a local level.

The kitchen employs four regular prep cooks, three kitchen assistants or managers, and have rotational workers come in for larger catering jobs. Initially, Schafer saw this as an opportunity for her son and others.  Now, her son has multiple part time jobs, and while he still comes to help in the kitchen, it is not his main job. Schafer continues to help employ and teach cooking and kitchen skills to others.

Schafer has plans to expand the business, but right now the focus is on getting their own kitchen. Taproot is currently working out of Good Shepard Parish twice a week to fulfill their catering orders, but Schafer wants to take on more, and feels the non-profit can too.

“Our gleaning networks, the people who give us local food that didn’t go to market, doesn’t always coincide with the times we can be in the kitchen,” Schafer said. “We could really do this every day.”

While they currently cater and make soups for a local café, Schafer wants to expand and create even more jobs in the community. She believes the business could spin off into self-supported employment through small food businesses and the team plans on going into the local farmers’ market.

Schafer even wants to go into food trucks at some point, and believes her son will really get involved and excited about that aspect of the business.

The excitement she sees on her employee’s faces is one of the most rewarding parts of her job.

“I love it when they decide they can figure out how things have to be labeled.” Schafer said. “For example, they’ve been taught how to label certain things, and they follow a bunch of food safety rules. You can see the lightbulb clicking and how happy they are taking charge.”

Video: A Plan for Expansion


Having their own work space is Taproot Kitchen's first priority, but Sharon Schafer sees further expansion coming swiftly in the near future.

Ava Rash is a Senior from Pittsburgh, PA. As an avid sports fan, Ava has taken the steps to further her experience on and off the court. For the past year, Ava has worked for Penn State Intercollegiate Athletics as a marketing intern and is currently an emcee for sporting events including Men’s Hockey, Wrestling, and Women’s Volleyball. Ava has helped with the production and marketing of games, including the Men’s Basketball THON Hoops game, which was the highest attended game in years. Ava is a member of the John Curley Center for Sports Journalism, and hopes to continue her career as a sideline reporter. Ava has previously worked as Penn State’s Homecoming Sideline announcer where she commented and interviewed throughout the live event. Ava also works for the Centre County Report as a reporter and is currently an executive producer.