Clark says his goal is to write the truth.

“We are very encouraged to kind of hide things and sugar coat things, so they are a little more palatable,” Clark said. “I have always been a straight forward person, so poetry gave me a way to do that.”

Clark believes writing poetry is the best way to start a conversation, especially with those who might have the same thoughts, but are afraid to share.

The poems Clark writes are not always easy to here and sometimes he is afraid of what people say.

One of Clark’s poem, titled “Sit Tight” talks about his personal experiences with education. He shares in the poem how he feels if you are not a Christian, suburban white male from a middle or upper class family then the system is skewed against you. 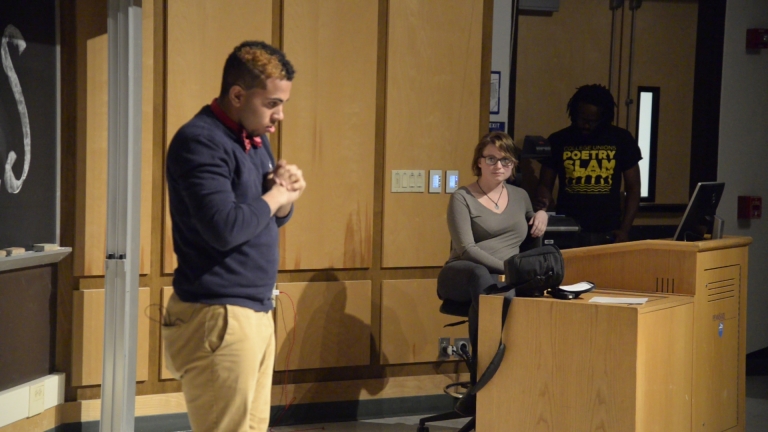 “The spoken word is a personal showcase of you, personally, and judgment comes from that,” Clark said.

He shares his frustrations in the poem because even though he is willing to dedicate his life to educating others, education won’t give him something in return.

“The poem was my first angry poem – being a black male, at a predominately white campus,” Clark said.

Davon Clark prepares for his performance of "Sit Tight" at the Penn State W.O.R.D.S. Slam Series. Photo by Megan Caldwell

Even though the voices in the back of his mind tell him people may not like what he writes, Clark reminds himself that everyone’s opinion is valid just as much as his.

Clark said he writes his poems so he can “spit” them, a vernacular term used to describe performing slam poetry.  It is similar to rapping but with no music.

“It’s a way to get your total body and mind into it,” Clark said.

When he writes his poems, he doesn’t decide what the rhythm is until he stands up and starts to perform. For him, he says performing slam poetry is all about what he is feeling at the time.

When he is not writing poetry, Clark is a member of the Penn State Club Wrestling team.

"Its like fighting without the 'I hate you' kind of thing." Clark said. 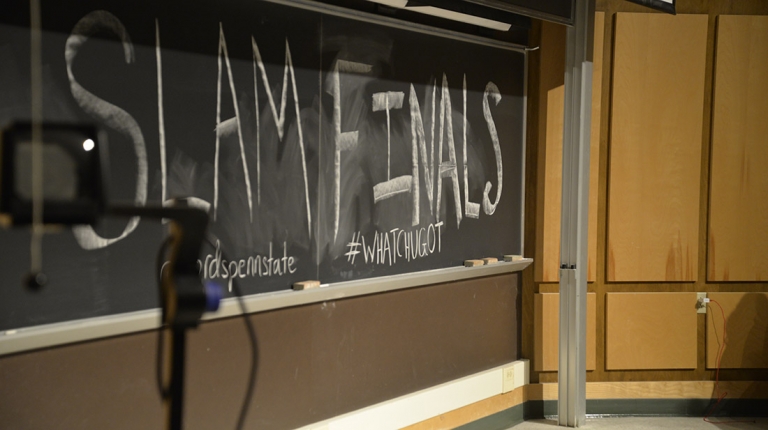 The chalkboards in 105 Forum set the scene for the Slam Series Finals. Photo by: Megan Caldwell

The group performs at campus events and recently held their first Slam Series. The Slam Series was a campus wide search to form a competitive team to compete against other universities.

Clark made the team.

One day Clark would like to use slam poetry as a way to travel.

“I feel like God is using poetry as a way to kind of like speak and preach,” Clark said. “Not to say I am quoting Bible verses every line or something, but telling the truth, we aren’t used to that.”

Clark describes the first poem he ever wrote and the special person he wrote it for.

Megan recently completed an internship at NBC Los Angeles as the 11 o’clock news intern. During the Fall of 2014, Megan participated in the Washington D.C. program and interned at The Hill Newspaper.  Megan was a staff reporter at The Daily Collegian for five semesters and a news intern at WPSU Public Media last spring. Upon graduation, Megan hopes to pursue her love of politics and the news as a political reporter for a television news station.

Let me get this ‘write’