Timothy Goff will be graduating this May from Penn State with a degree in international economics, and a minor in business administration. He has spent the past two years here in State College after transferring from Montgomery Community College in Blue Bell, Pa.

A week after graduating from high school in 2008, Tim Goff enlisted in the Marines and started basic training. He was following in the footsteps of his older brother Jeff Goff and joining the same unit in the Marines Goff deployed six months after enlisting, feeling excitement, adrenaline, and a little tinge of disappointment. Not only was he excited to be overseas and in combat, but he said he was disappointed to say goodbye to his family for what he thought would be a whole year. 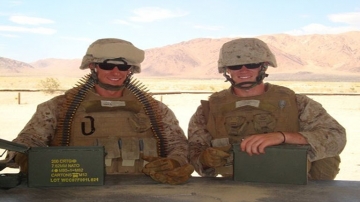 While overseas, he was part of a platoon that had about 27 members who became some of his best friends and brothers. During a normal day they spent time in the gym, kept in touch with family. On a mission things were very different.

Goff was a lance corporal he said that his main job was to find and deactivate improvised explosive devices (IEDs). In Iraq he was stationed in Al Anbar province and Fallujah, and assigned to rear security  searching for IEDs. While on the main highways of Iraq he learned to keep traffic 100 yards or more away from their convoyto avoid possible suicide car bombs.

After his first mission his commander applauded his work and asked him to move up to the front of the convoy. Tim said his initial reaction of joy and excitement. As the pressure and stress of being the first person to find IEDs set in. He no longer was relying on someone else’s eyes, everyone was relying on his. He was the first person to have to spot the signs and debris hinting that there could be an explosive device in front of their convoy.

On the plane ride home he stated that the one feeling he had was that no one was trying to kill him, which the past half-year of his life was him always being alert and ready to fight. Although he had only served 6.5 months overseas Tim has continued to train for the just in case factor of being deployed another time. He will officially retires as sergeant from the marines in June of 2014.

I am a senior at The Pennsylvania State University and I am studying Broadcast Journalism with a minor in Sociology. I have plenty of experience throughout my college career that will make me an asset at any company. I have come to be very familiar with public speaking, radio and video editing, camera usage, and news writing. Penn State has not only given me hands on experience, but it has given me the skills to excel within any communication field.