PHILADELPHIA –– Mark Singel wore a smile that almost stretched the diameter of his face as he made his way around the Ormandy ballroom of the Doubletree Center City here Monday to greet his many friends in the Democratic Party.

Boasting the bravado of someone seeking office, Singel was easy to spot in a distinctive purple shirt among the 400 Democratic delegates, politicians and guests at the party’s breakfast. 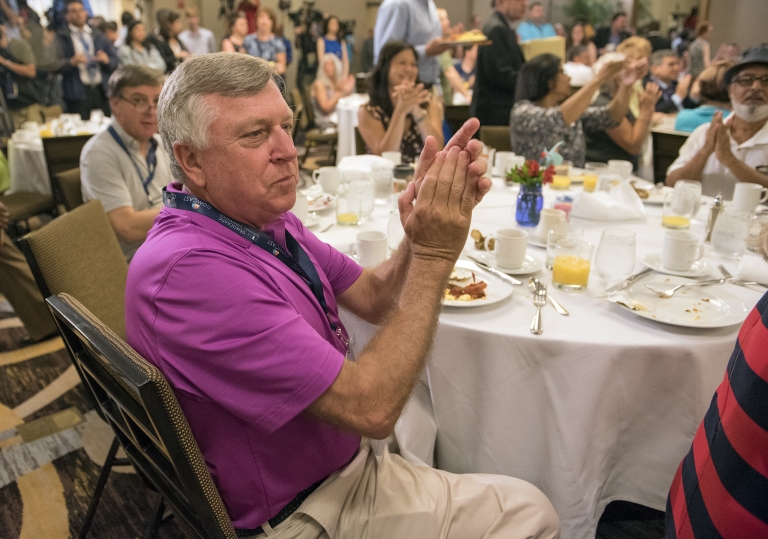 His name, however, won’t be appearing on a ballot for a major office come November. In fact, the state’s former lieutenant general hasn’t made a push for office since he ran for governor in 1994 and lost to Republican Tom Ridge.

He is, however, a delegate at the Democratic National Convention for the eighth time. For the past 22 years, he has been a lobbyist and consultant. And as of May, he has been a published author.

“A Year of Change and Consequences,” published by Sunbury Press, Inc., tells the story of Singel’s experiences before, during and after his transition from top adviser to acting governor and how they shaped Pennsylvania politics.

Singel stepped in for Gov. Robert P. Casey for six months in the middle of 1993, when Casey underwent a life-saving heart-liver transplant. Casey suffered from a rare illness called familial amyloidosis.

“One day I was cutting ribbons and making speeches,” said Singel. “The next day the governor was in the hospital with a life threatening double organ transplant procedure, and I found myself signing billion-dollar checks.”

Ultimately, Casey recovered and returned to office to complete his second term. Casey, whose son is U.S. Sen. Bob Casey, died in 2000.

“There’s a world of difference between standing by and actually having the pen in your hand,” he said of taking over for Casey. “I like to think the book could be instructive to other lieutenant governors and people who suddenly have executive responsibilities thrust upon their shoulders.”

Though Singel, a graduate of Penn State, still entertains the idea of holding office again, he works mostly as a consultant for the politicians he supports, offering advice from his nearly two decades of holding office.

“I’m one of those people who believes in public service,” he said. “Anyway I can be of assistance to the commonwealth, I’m going to continue to do.”