A Sister In Harmony

For singers, it’s hard to watch something like Pitch Perfect or Glee and not want to be part of the performances.

Quinty, a senior majoring in elementary education, is the president of Savoir Faire, Penn State’s original all-female a cappella group formed in 1996. The group is currently comprised of 15 girls ranging from freshmen to seniors, sopranos to bass', and a variety of different majors. 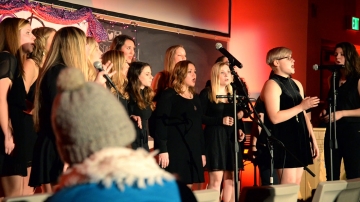 Each member has her own unique music taste, which makes for an eclectic setlist at their concerts. The group is known to arrange and perform songs that most would know by artists such as Katy Perry and Sara Bareilles, but also slip in some personal favorites from less recognizable artists like Delta Rae.

Growing up in Doylestown, Pa, Quinty says she was always musically active. Starting in 7th grade, she was always in her school’s plays and musicals. She said she enjoyed the few lead roles she performed, but much preferred getting to learn the simple choreography and songs as part of the ensemble. In 9th grade she began focusing on her own voice by performing at local coffee shops and different events around her town.

As a Penn State freshman, Quinty said she attended the student involvement fair and discovered a cappella life. She auditioned for Savoir Faire and became a member. She is president of the group this year. As president, Quinty is the face of the group. She is responsible for keeping her nine executive board members on track, as well as being there for the general members if they have any problems. Quinty is also on the executive board for an after school theatre program called Harmony.

Quinty has had various solos during her time singing with Savoir Faire, most notably for her duet in their signature arrangement “Nothing But The Bottom Of The River”, a mash-up of songs by Delta Rae and Grace Potter. She’s also gotten the chance to do her own arrangements to the songs Blue Eyes Blind by ZZ Ward and Hercules by Sara Bareilles.

Quinty says she is excited by the growing popularity of a cappella. She loves that popular culture presences such as Pitch Perfect, The Sing-Off, and Grammy award-winning group Pentatonix has made such an impact in the community. However, she can’t see herself voluntarily picking up an a cappella album to listen to in her spare time; she sayd that participating is much more enjoyable than spectating.

Savoir Faire performs whenever and wherever they see fit. You can typically find them at the Student Bookstore on College Avenue every Sunday morning after a home football game. In the past, they’ve opened for the national Sing-Off Tour at the Bryce Jordan Center and at the Presidential Suite during this year’s homecoming festivities. Each semester, they also hold their own concerts and perform at a Sampler with other a cappella groups.

Like the characters in Pitch Perfect and Glee, it eventually comes time to graduate. Savoir Faire has brought Quinty joy, escape, and great friendship throughout her years as a Nittany Lion. Many of her closest friends, and even some roommates, have come from the group and for that she’s very grateful. Post graduation, she said she would love to continue her teenage hobby of performing in local establishments, but doesn’t see herself continuing music in a more organized fashion like Savoir Faire.

If that’s how you’re reading their group name, you’ve definitely got it wrong. Quinty says that Savoir Faire (SAV-wahr-fayr) is a French phrase that the group has continued to embody over the years.

Alex DeGregorio is a senior from Basking Ridge, New Jersey, majoring in Broadcast Journalism and minoring in Italian. She is also a member of the John Curley Center for Sports Journalism. After spending her first two years at Penn State Berks, her junior year consisted of play-by-play announcing for State High and the Penn State Softball team for ComRadio. During the summer of 2015, she got to intern with the Somerset Patriots in Bridgewater, NJ, as their SPN.tv intern, which allowed her to produce, edit, and film shows for their network as well as film game highlights. Aside from her major involvement, she is the 2016 overall chair for Common benefiting THON. Post graduation, she would love to do something similar to her previous internship: producing and editing shows/highlight videos for a baseball network, preferably The YES Network.

The Face of The Corner Room for 58 Years