It’s hard to miss the home of Heather Luse. Nestled in the front yard just a few feet away from the street is a large metal wedding cake with slightly rusting edges.

Luce laughs when she talks about it – not only because she’s the executive pastry chef at Penn State – but because her home also doubles as a small cake business, Delectable Delights.

“Simply incredible,” raves one online review about her business. Another boasts of the designs and the taste of her cakes.

Luse opened Delectable Delights more than 20 years ago, and since then, it has snowballed into a small -- but flourishing -- business. She designs towering wedding cakes with carefully iced flowers for newlyweds, but has also designed a "Peppa Pig" birthday cake for a 2-year-old. 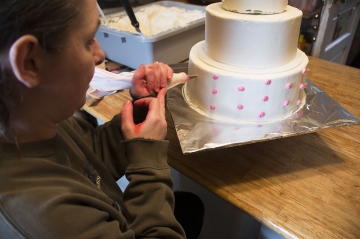 Heather Luse, executive pastry chef and owner of the small business Delectable Delights, focuses on icing a cake for a 2-year-old's birthday party, which was "Peppa Pig" themed. Photo by Megan Henney

As head pastry chef, she's more hands off -- making sure everything is operating smoothly, ensuring that recipes are being followed properly. The Penn State Housing and Food Services branch is responsible for delivering all types of pastries, including bread, cookies, cupcakes and all types of cakes to the campus dining halls and local hotels.

And though Luse enjoys the position, which often requires sitting behind a desk, she’s grateful that she can still spend the time at her second job to stretch her more creative baker persona.

But twenty years ago, Luse’s path wasn’t so straightforward. She was studying at Penn State, floundering, and decided to drop out until she figured out what she wanted to do in the future. It was only when Luse chose to go to culinary school in Pittsburgh that things began to fall into place.

Upon completing an internship with Toftrees, she applied for a job with Penn State Housing and Food Services. Another candidate beat her out for the job, but a few months later, the human resources office contacted Luse and asked her to come in for an interview. She got the job, and in 2006, became the executive head pastry chef.

But in addition to balancing two jobs, Luse is also balancing a full family, complete with a husband of 15 years, Keith Luse, and four children: Isabella, 9; Sophia, 7; Alex, 3; and Elliot, 1.

Keith Luse preps things for her while she’s at work during the weekdays and cleans up when she’s done baking. And on the weekends, he helps with deliveries, piling cakes and cookies into the back of his truck and.

“They just know this world,” she said. “Mommy does  cakes. All of their classmates know how to hold pastry bags. They’re all learning life skills, or decorating skills, in their classrooms.”

Sometimes balancing work and her children can be challenging, like when Sophia decides to “hulk punch” Alex in the face, leaving him with a small scratch between his eyes, or when all four children start coloring Christmas trees but end up with more green marker on their faces than on the paper.

Luse puts up a gate between her work area and the rest of the house, but so far two have figured how to jump it, climbing as skilled as they can to reach her.

“There are definitely days that are a little more stressful than others,” she said. “But for the most part it’s pretty good.”

A Business and a Home

Luse runs Delectable Delights outside of her home, which is located on Jefferson Ave. in Centre Hall, a small borough in the State College Area. Though she converted part of her home into a seemingly professional bakery, part of it still remains a home to her, her four children and her husband. Littered throughout are toys, decorations and crafts from members of the family.

Megan Henney is a senior print journalism and political science major and a history minor. She is Pennsylvania native from outside of Pittsburgh. After she graduates, she is interested in covering national or international news. Most recently, Megan interned with the Pittsburgh Post-Gazette as a reporting intern. She has previously written for the Pittsburgh Tribune-Review, the Centre Daily Times and the Daily Collegian.