A Taste of Café Laura

Café Laura is a fine-dining restaurant located at the north end of Penn State’s main campus. What many people don’t know is that it’s run entirely by students as part of their degree program.

After closing time, senior Natalie Pecorino dropped a vase in the dining room, shattering glass all over the floor.

Senior Garrett Wagner shouted to her, “Hey don’t wash that, okay?” Wagner cracked himself up at his own joke, while Pecorino rolled her eyes and began cleaning up the glass.

That’s the atmosphere at Café Laura.

What Is Café Laura?

The class, HM 430, is a capstone course for students studying to enter the world of hospitality management. It requires about 10 hours one night a week, including food prep, team meetings, clean-up and, of course, running the evening’s themed dinner.

Each team of students gets to prepare their dinner twice. Students rotate through various positions at each others' dinners, ensuring that they are exposed to as many aspects of the restaurant business as possible. 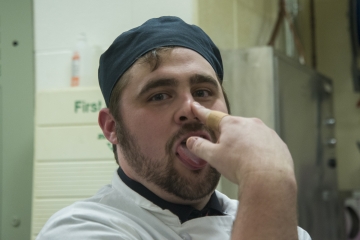 Wagner spent three years at Penn State’s Behrend campus, before taking a break from school. During his time off, he began working in restaurants, where he discovered his love for cooking and the restaurant business.

Wagner says that the ever-changing atmosphere is what he loves about the job.

“I kind of see it like a puzzle, you know? You have all these moving parts and you try to fit it together the best way you can,” Wagner said. “And at the end of the day it gets jumbled back up, and you’ve got to put it back together again. It keeps me on my toes and that’s something I really like. It’s a new challenge every day.”

“I like to describe it as a greatest hits record of American cuisine,” Wagner said. “We’ve got all of these great American classics all in one menu. It’s fun to make.”

“It was tough, it’s the first time I’ve planned something like that from front to back,” said Wagner. “I’m not very good at that. It was good to have other group-mates with me to help guide me through that and learn those skills.”

While students are all business during dining hours, the team lets loose after the doors close behind the last customer. Laughing, joking and eating help the students release some of the stress after a fast-paced evening.

Natalie Pecorino, a Hospitality Management major, said that the most rewarding part is seeing her work come to life. That, and the friendships that she’s made along the way.

“Everyone here really becomes a family," Pecorino said. "Class starts at 1:30, and I don’t get home until probably 11:30 at night, but you spend so much time with these people.”

“It really is a fun atmosphere if you make it that way. The people are my favorite part,” she said.

Since the class is composed entirely of upperclassmen, students have started thinking about their lives after Café Laura.

Eventually, Wagner wants to open his own restaurant someday. The name?

“One that’s been gnawing around is Garrett’s Spot. I don’t know, a little bit lame, I think?” laughed Wagner. “I just want one of those spots that’s a fixture in the community.”

Allison Gasparetti is a New Jersey native and currently a senior at Penn State University. In December of 2016, she will be graduating a semester early with a degree in Broadcast Journalism, a minor in French/Francophone Studies, and a certificate from the John Curley Center for Sports Journalism. Allison recently traveled to Rio de Janeiro in September to provide coverage of the Paralympic Games for the Associated Press. She is currently on staff with Big Ten Network’s Student U, where she has gained valuable live production experience, and is also a producer of In The Game, an Emmy Award-winning production that dives deep into sports stories with local and national impact to create a magazine-style show. She takes great pride in being a reporter and past producer for Penn State Sports Night, a student network-affiliated show centered around Penn State athletics. She has enjoyed being a member of several student organizations on campus, in addition to her part-time job and various other activities at Penn State. You can visit her personal portfolio at allisongasparetti.weebly.com or follow her on Twitter @a_gasparetti.