Aftershock: Penn State students react to a child sex abuse scandal and the loss of a revered coach


It started with a trickle of news. Students at the University Park campus of Penn State University learned that a former assistant football coach had been indicted by a grand jury nearly a hundred miles away.

The story written by Sara Ganim, a recent Penn State graduate herself, was published on a Friday evening on the website for the Harrisburg Patriot-News. The next day a second Ganim story linked to the 40-count indictment against forrmer Nittany Lions football defensive coordinator Jerry Sandusky. The 23-page document presented by a Dauphin County grand jury painted a sordid picture of a trusted adult who allegedly used his football and charity positions to molest eight boys.

The grand jury document also described actions -- or lack of action -- taken by university officials  to investigate some of the incidents, in particular an alleged shower room liaison in a Penn State football locker room between Sandusky and a teen boy that was witnessed by another assistant coach. 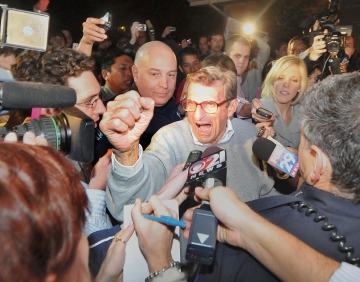 By Tuesday it was clear that the job of revered football coach Joe Paterno was in jeopardy. Athletic Director Tim Curley and interim Vice President for Finance and Business Gary Schultz faced indictment. Satellite trucks were parked in front of Old Main and next to Beaver Stadium. The university president was forced to resign. Then Joe Paterno was fired.

Questions began. How upset should students be about a coach, when teen and pre-teen boys had allegedly been sexually abused?

Thousands of students attended a candle light vigil in front of Old Main to show their support for the alleged victims.

Students began to assess their motivations and reflect on the tarnished reputations of people and institutions they had admired. This project reflects their thoughts.

Students at Penn State had a special relationship with coach Joe Paterno. Even though he held the record for most victories by a NCAA Division 1 football coach, he hardly lived in a bubble. Paterno's house was only a couple blocks away from campus. On a nice day he liked to walk to work. Everyone seemed to have a story about meeting him.

This cell phone video, made for The Daily Collegian the night before he was fired, shows that special relationship as Paterno opens a window to address hundreds of students standing in his front yard to show their support.

Just a few weeks following the indictment of former coach Jerry Sandusky, journalists Krista Myers and Katherine Rodriguez made this video as nearly a dozen Penn State students shared their thoughts, feelings and reflections on what happened.

~ Content included in this project was first published in The Daily Collegian, Centre County Report, the ComMedia websites and OnwardState.com.

I grew up in Springfield, Pennsylvania, about 15 minutes outside of Philadelphia. Growing up, my life revolved around sports.  I played soccer and baseball from the time I could walk and am an avid hockey and football fan.

My love for sports and easy-going personality made me decide to enroll in the College of Communications and pursue a career in sports journalism.

I have had the opportunity to intern for a news station, WMGM-NBC 40 in Atlantic City, New Jersey, under the sports director there.  I learned what it was like to be the anchor for local sports and the day-to-day requirements that would come with the job.

Because of my love for sports, I enrolled in the John Curley Center for Sports Journalism just before my senior year and have been given the chance to write for sports and also learn about sports broadcasting.  In the spring of 2012, I also took a sports broadcasting class in which I helped produce a sports show with my peers.

My hope is to get into the field of sports journalism so I can turn my passion of sports into a job that I will not only enjoy but be excited about.

I am a Junior at Penn State University and am hoping to work in the sports photojournalism industry when I graduate.

I am a Broadcast Journalism major at Penn State University due to graduate in May 2013. In addition to my major I am also working toward a double minor in Political Science and Business.

I currently report, anchor, and produce for the Centre County Report as part of the College of Communications at Penn State University. I am the executive producer for the Spring of 2013.

I have worked in both radio and television at the collegiate and professional levels.I have had the opportunity to intern with WABC-TV, CBS Radio and CBS News in New York City working as part of Eyewitness News, The Early Show on CBS and Chat About It for CBSNewYork.com. During the Penn State Sandusky scandal I assisted producers from ABC News and WABC onsite in Bellefonte. I have also been a a high school football reporter for WQWK 1450 ESPN State College and a videographer at the local government channel CNET.

I have been a part of the Big Ten Network’s Student U broadcasting program for soccer, volleyball, and softball. For the past two years I have been calling Penn State softball games for 1390 WRSC-AM.

In my time at Penn State’s student radio station ComRadio, I have had the privilege of doing play-by-play for multiple Penn State sports including football, men’s and women’s basketball, baseball, softball, hockey and men’s and women’s soccer. Furthermore, I have experience producing multiple sports for ComRadio. In addition to sports, I am also heavily involved in the news department where I produce weekly as well as anchor and report.

My goal is to work as a television anchor or reporter for a major television news organization.