Another Home Not Far Away 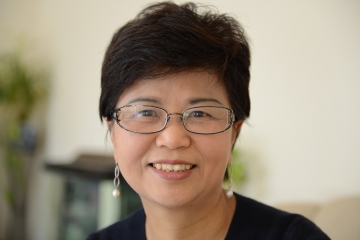 Jean Yu lives in State College with his husband for almost 21 years. She runs successfully a Chinese restaurant and she actively involves with local community activity. She is content with her life here in the States now.

Yu grew up in a small town in Sichuan Province, China. She moved to the United States in 1991 to be with her husband, who was pursuing his PhD degree in Arizona.

Chopstick Express is popular among Chinese international students at Penn State because of its authentic Chinese cuisine. Yu and her partner Jin Zhou opened the restaurant 20 years ago at 134 E College Ave. Yu became sole owner in September.

Chopstick Express is popular not only because of its food but also because of Yu's warm personality. She greets everyone with smile and knows most of her custormers by name. Many Chinese students sees her as a mother figure while they are here in the states.

"She is one of the best people I know." Dr. Oliver said.

Video: A stranger in a new land

When Yu arrived in Phoenix 25 years ago, she said everything seemed new and scary. So she understands what it's like for Chinese students attending Penn State. She says students talk to her about variety of things including academic life, leisure activities and family.

Sometimes their stories bring her to tears. “It’s not easy to be this sensitive like myself,” Yu said.

Viola(Xinyu) Du is passionate and skilled at photography, audio and video production. She plans to be a Multimedia Journalist after graduation.

Teaching Happy Valley how to cook, one meal at a time.