Nestled in a small Central Pennsylvanian community of a little more than 6,000, the Logan Fire Company has its work cut out for it. Bellefonte sits in a hilly, rural area and once passed the old, Victorian buildings in the borough, houses are spread out and often water must be brought to the scene. 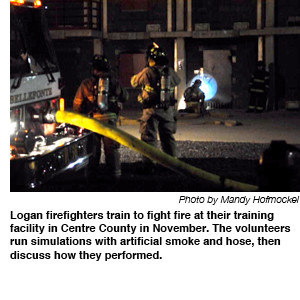 Many of these old buildings have been renovated time and again leaving false walls and ceilings where fire can travel quickly through the structure.

Luckily, the borough provides this all-volunteer outfit the funding for necessary equipment and apparatus, including two big red engines.

These engines scream to the scene of accidents, calls for help with medical assistance and fires, receiving about one call a day on average.

They race to the scene to help those in need, but there's another reason in the back of their minds: Beating the Undines.

The Undine Fire Company with its navy blue trucks also serves Bellefonte. And they are located about three city blocks or a five-minute walk from the Logans.

Their "friendly" competition boils up out of a long history, but the volunteers at both stations have jointly rushed to the scene of many people in and around the borough that other companies might not have made it to as quickly.

Fire companies have a rich history of competition

It's not unusual to have multiple volunteer fire stations serving one community in Pennsylvania, State Fire Commissioner Edward Mann said. At one point Bellefonte had three. 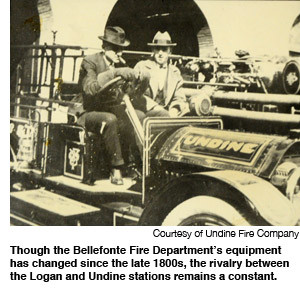 The 140-year-old Logan and Undine stations have rich histories. Both stations have survived reorganizations and their stations being destroyed.

In the late 1800s multiple stations were often made up of specific ethnic and/or religious groups.

Although he can't recall it being written anywhere, Logan Member Dave Schultz said when he was fighting fire in the 1960s, older Logans described for him a station made of Protestant Republicans. The Undine station was made up of Catholic Democrats, they told him.

Since then, the stations have come up with a way to respond jointly to calls. Their competition is more friendly than fierce, each station just looking for the bragging rights of beating the other to the scene of the call.

Each company has different equipment and skill sets that would compliment each other in the event of a fire.

The Logans have engines and rescue equipment, including the jaws of life, and the Undines have trucks, equipped with an aerial ladder for high building fires.

These companies, located in the heart of downtown Bellefonte, serve the borough and its surrounding municipalities.

Without the two stations in Bellefonte, residents would depend on neighboring stations which, could take two to three times longer to get to the scene because of their distance, Logan Chief Doug Schreffler said.

Response times could go from five minutes with Bellefonte Fire Department responding to 10 to 15 minutes for other companies to arrive on scene, and fire can double in size about every five minutes, Schreffler said.

No one knows this better than Jim Boscaino, owner of Jim's Italian Cuisine. Boscaino can see the back of the Undine's station from his restaurant on East Cherry Lane, a location that came in handy after his restaurant caught fire when a fryer was left on in February 2011.

"By them being so close and responding so fast, they probably saved me the building," Boscaino said.

The firefighters put in that "little extra effort" because they knew Boscaino like they know many others in the small borough. Volunteers hauled his perishable food into refrigerated trucks so it wouldn't go bad, he said.

"These are volunteers. They don't get no money like you see in the cities," he said. "Some of them leave their family no matter what hour of the day what day it is to come out and just help the local community."

Two companies double some costs, but volunteers save borough funds

Doubling the infrastructure in Bellefonte does increase the cost to the borough, but by using volunteers rather than a paid department, the borough also saves. 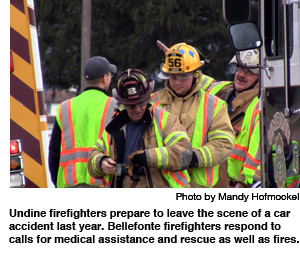 A 2005 study for the state legislature on volunteer fire companies showed that about 72,000 firefighters actively staff 2,354 all-volunteer companies in Pennsylvania.

The study sites another study conducted by the Pennsylvania Fire and Emergency Services Institute, which estimated that these companies save state and local governments $6 billion each year.

Despite these numbers, some volunteer outfits are struggling. Some don't receive enough monetary support from their communities and a lack of new recruits can be a growing concern.

This is not the case in Bellefonte, but whispers of consolidation have run about through the volunteers. Some say it will never happen and others say they don't see how the borough can continue to pay.

Talk of consolidating companies in communities with multiple stations has increased dramatically in the last two years of the ten that Mann has been state fire commissioner, he said.

"People don't want to lose their identity," he said. "Ultimately, when it comes to a consolidation or merger, it's a local decision."

But proud Undines and Logans can rest easy for now because those whispers have stayed at that.

A rich history of fighting fire with volunteers

Dave Schultz says the Logans and Undines have come a long way in a century and a half. Taking a fire ax to each other's hoses to gain control of a fire scene was not uncommon in the nineteenth century, Schultz says. The competition is much friendlier today.

A window into the past: Old Logan and Undine Photographs

Mandy Hofmockel graduated from Penn State University in May 2011 with a degree in Media Studies. She was the student marshall for the media studies program at commencement. She is now a multimedia producer for MassLive.com in Amherst, Mass. While she was at Penn State Hofmockel covered lumberjacks, politics, crime, courts and philanthropy while working as a reporter, copy desk chief and web editor for The Collegian, the independent student newspaper, and as a reporting intern at The Times Herald in Norristown, Pa. During the summer of 2010, she was the Dow Jones Newspaper Fund intern for California Watch, an investigative reporting Web site in Berkeley, Calif.