Before he attained Olympic glory, Jim Thorpe was an athletic hero in Carlise

“Sir, you are the greatest athlete in the world,” King Gustaf V of Sweden said to Jim Thorpe after his re- cord-setting performance at the 1912 Olympic Games in Stockholm. Thorpe, humbled by the compliment, re- sponded: “Thanks, King.” 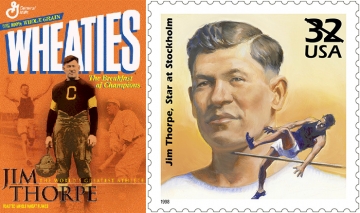 James Francis Thorpe was born on May 28, 1887, in Prague, Okla. He was born with a twin brother, Charlie, who died of pneumonia at age 9. Jim, an active child, full of energy and love for his tribe, was devastated over his brother’s death.

Each of his parents was half Native American (his mother, Charlotte, was half French, and his father, Hiram, was half Irish), but both identified as members of Sac and Fox tribe.

Sandra Massey, historic preservation officer for the Sac and Fox Nation in Stroud, Okla., said Jim was forced to attend school, even though he had little interest in it. The government had created Indian boarding schools to try to integrate Native Americans into white culture.

“Back in the day there was a saying, ‘Kill the Indians and save the man,’ so they sent him to boarding school,” Massey said in her office in Stroud.

Thorpe repeatedly ran away from school; he was depressed about his brother’s death and he hated school. Thorpe attended Haskell Institute, a boarding school in Lawrence, Kan., for a few years, until his mother’s death. At age 16, he was sent 1,200 miles east to Carlisle Indian Industrial School in Carlisle, Pa. It was there that Thorpe’s athletic abilities were discovered by the famous coach, Glenn S. (Pop) Warner.

Justin Lenhart, curator of the Jim Thorpe Museum in Oklahoma City, said the Native American trade schools were dismal failures. But Thorpe used his experience at Carlisle for something else: to launch an unparalleled athletic career.

Thorpe joined almost every sports team at Carlisle, not just track and field and football, but also golf, baseball and lacrosse. And he became a ballroom dancer, winning first place in the 1912 intercollegiate ballroom dancing championship. 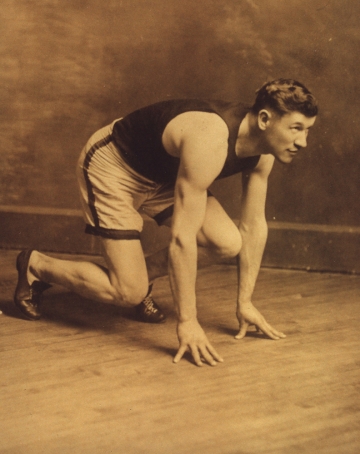 But track is where Thorpe really excelled.

He could run the 100-yard dash in 10 seconds. He could high jump six and a half feet. He came near 24 feet in the broad jump. He could throw the shot put nearly 48 feet. He could heave the javelin 163 feet.

Even though he set the marks more than a century ago, they would be impressive today.

Warner was hesitant to let Thorpe, his track and field star, play football. Thorpe argued otherwise and proved him wrong. “Nobody is going to tackle Jim,” he reportedly told Warner.
Thorpe played football against the best school teams in the country at the time—Harvard, Syracuse, Penn, Princeton, Army and Penn State—and he won All-America honors. He could run with the ball, block with authority and drop kick field goals. Legend has it that in 1942, Thorpe returned to Carlisle, stood in the middle of the field and dropkicked a football through each goal post. He was wearing street clothes.

In a game against Army, Thorpe tackled one opponent so hard that the man never played football again. That was Cadet Dwight David Eisenhower, who found success off the playing field.

Lenhart said the 1912 games were a turning point

“A lot of historians say that without this,” Lenhart said, “the Olympics may have died off.”

Thorpe left Stockholm a hero, but controversy ensued. He had once accepted a minuscule amount of pay, just enough to cover room and board, to play summer baseball for the Rocky Mount Club in the Eastern Car- olina League. Thorpe was ruled a professional athlete
and therefore ineligible to participate in the Olympics. The Amateur Athletic Union stripped him of his Olympic medals.

A Thorpe biographer, Robert Wheeler, and Wheeler’s wife, Florence, began investigating the AAU’s decision in 1979. They said that Florence, while doing research at the Library of Congress, found a pamphlet containing the rules for the 1912 Olympics.

The rules said any accusation of violations must be made within 30 days of the Olympics. It was six months after the Games that Thorpe was charged with profession- alism. The Wheelers met with the president of the U.S. Olympic Committee, former Secretary of the Treasury William Simon, to try to have the charges removed.

The Wheelers also created The Jim Thorpe Foundation, where they collected 3.5 million signatures for a petition to have the medals restored.

It took nearly three decades after his death, but Thorpe’s name was reinstated as a participant in the 1912 Olympics and his medals were restored in 1982 by the International Olympic Committee. Duplicate gold medals were given to the Thorpe family.

Several were involved in efforts to restore Thorpe’s medals. Ray Brader, co-coordinator of the Jim Thorpe Birthday Committee in Jim Thorpe, Pa., said the people of Jim Thorpe, along with Jim Thorpe’s daughter, Grace, were active in the effort.

Wheeler said that he has the highest respect for the people of Jim Thorpe, Pa.

“The real issue is not who gets credit for restoring Jim Thorpe’s medals and honors,” Wheeler
said. “Many people made efforts to have them restored and they all deserve to be applauded for trying to right this wrong. The International Olympic Committee’s stripping Jim Thorpe of his awards for the 1912 Olympics was the greatest injustice in sports history.

After the Olympics, Thorpe played baseball for the New York Giants, Cincinnati Reds and Boston Braves. He also played football for the Canton Bulldogs in 1915, one of the 14 teams to launch the American Professional Foot- ball Association (APFA), which would later become the National Football League. Thorpe was the first president of the APFA.

Thorpe was married three times and had eight children, four from his first marriage and four from his second. His first two wives divorced him.

In 1945, Thorpe married Patricia Askew. He worked a variety of jobs in his final years in California, including speaking tours and minor acting roles, often playing an Indian chief in westerns.

Thorpe helped write the screenplay to the movie about his life: “Jim Thorpe – All-American” in 1951. Burt Lancaster played Thorpe in the black and white film.

Thorpe fought lip cancer, heart problems and alco- holism in his remaining years. He died of a heart attack on March 28, 1953, in his home in Lomita, Calif., with Patricia by his side.

After the sorrow, Newtown is determined to recover