The President and Founder of Beyond Expectations (BE), Kiera McClellan, has dedicated a great deal of her time to watering the seed of her organization since it first came into fruition last year. McClellan regularly helps to host BE makeup, beauty and modeling workshops that aim to enhance the beauty and confidence of anyone willing to attend.  This year the organization staged its first fashion show. 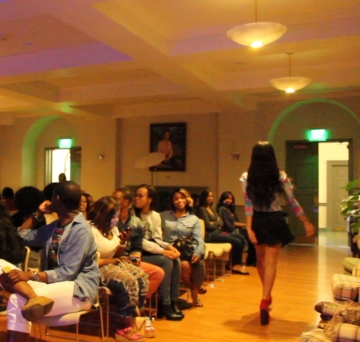 This year’s theme was “Fire and Ice” where the colors, music and attitudes complemented that of a “hot and edgy” or “soft and cold” aura. For example, in one of the scenes the models wore all red and black and glided down the runway to a provocative tune. In the same scene, the choreography consisted of the females slightly teasing the males as they danced in front of them.

People in the crowd swiveled in their seats to keep up with the action, shouting out their appreciation for both the clothing and the models.

The models, both male and female, prepared the whole semester for the “Fire and Ice” show that took place last Monday, April 21st. All of the coordinators sought to both raise money and attract potential members for the future of their organization.

Outside of Beyond Expectations, McClellan focuses her time on her Human Development and Family Studies curriculum as well as her part-time job. Through her many endeavors, she always keeps an eye and ear open for potential members and opportunities for “Beyond Expectations.”

McClellan applauds all women who recognize that “beauty is pain” when it comes to wearing heels over three inches for an extended period of time.

I am a senior at the Pennsylvania State University majoring in Broadcast Journalism with a minor in English.