“Squeek! Squack! Cheep!” These are the first sounds Tom Peradze hears every morning when he walks through his store. Thirty three years ago, Peradze opened First Flight Exotic Birds in Selden, New York in March of 1982.

At the time, Peradze owned three birds and wanted to open a store on Long Island that would help his fellow bird owners. In 1982, it was perfectly legal to purchase birds from around the world and sell them, so Peradze sold birds at his burgeoning business from Costa Rica, Venezuela and other tropical locations. Those birds have long been sold since Peradze can only receive birds from inside the country now.

But that doesn’t make his store any less interesting and unique than it used to be in 1982. There are over twenty different varieties of birds in First Flight Exotic Birds. The birds include African Grey parrots, Amazon parrots, Caciques, Cockatoos, Conures, Macaws and many others. 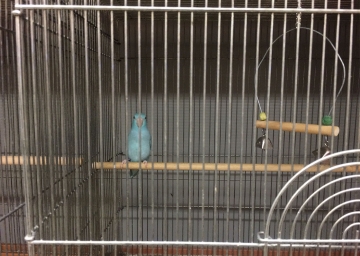 A blue hummingbird takes a break in his cage. Photo by Deesha Thosar

Peradze said his best selling bird is a favorite – the hummingbird. A close second are canaries. He said both birds sell the most as gifts and house pets due to their small size and low complications in taking care of them. As long as a clean cage with lots of food and water are provided for these birds, they are happy, he said.

Over the years, Peradze has had 15 of his own birds housed in First Flight Exotic Birds as pets. His wife disagrees with their presence in the comfort of their home, so Peradze would keep his birds in the store.

He now has two pet birds in the store, with his favorite being a green Amazon parrot named Princess. This particular parrot has been with Peradze since before he opened the store in Selden. He said she was one of the reasons he opened it in the first place. Peradze takes Princess out of the cage every day and gives her special treatment with extra treats and lots of hugs.

Peradze said each day he comes in and checks on each bird thoroughly. He inspects cages for urine and feces, while cleaning out food and water bowls for maximum health protection.

In addition to his daily routine on the older, regular birds, Peradze also hand feeds baby birds with a formula he and his veterinarian created together. As soon as he opens the cage door, the baby birds sway from side to side, patiently awaiting their yummy meals. He puts the formula in a tiny bottle, gently lifts the neck of the bird, and releases small squirts into their mouths. Peradze said hand-feeding birds is unique to his store and is hard to find in other parts of the country.

In addition to an entire community of unique birds, Peradze recently added an extra addition to his store. He found that many of his valued bird-owner customers also had dogs as pets too. So he decided to convert an unused back storage room into a dog grooming facility.

He said the room took about three months to rebuild and includes all the necessary materials and supplies for a dog grooming area. He hired a professional dog groomer, who Peradze claims is the best groomer in New York. Soon enough, bird customers brought their puppies into the store as they shopped around for new bird supplies. The store also includes various bird foods, toys and treats to cover all the grounds.

Peradze said First Flight Exotic Birds changed his life for the better and he loves talking to the customers about how much their birds mean to them. Although he’s owned the store for more than 30 years, he said he's not ready to give it up any time soon.

Deesha Thosar is a senior studying broadcast journalism, pursuing a career as a sports reporter for a major television network. Deesha was born and raised in Long Island, New York. She writes for the Daily Collegian and reports for a variety of Big Ten sports teams — Penn State football, men’s soccer, women’s volleyball, baseball and softball.