Brian A. Davis is a junior at Penn State triple-majoring in Criminology, Sociology and African American studies. Although very busy with his scholastic work, he does a lot more than just that; he’s recently created a book titled the Penn State Treasure, in which he provides insight for first-year students of color as well as change-of-campus students of color and provides them with the resources to survive and prosper while attending Penn State.

Davis is the president of the Social Justice Coalition; an activist organization that works to ensure students get what they believe they deserve out of Penn State. They hold pep-rallies, initiate peace walks on campus and more, with a focus on what’s going on around them and in society as a whole. This mainly covers contemporary news that the group feels they need to address within the community, a prime example of this is the president elect, in which Davis believes caused a lot of drama throughout election week. 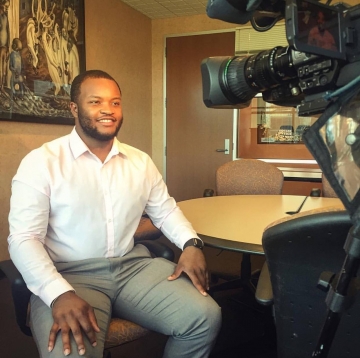 Brian's interview with WTAJ commending him on his efforts as the President of the Social Justice Coalition. (Photo by Justin Corbett)

Davis, and his partners initiated a peace walk on Old Main days after the election, with a focus on respectfully, but powerfully, refusing to accept Donald Trump as their future president. Davis referred to the event as a call to action, saying that he believes it is necessary for minorities and marginalized people to come together as one during times like these.

“This is a call to action, we have to come together and unify," Davis said. He said he felt very strongly about the thought of togetherness and unity, but he didn’t shy away from the fact of the matter, that racism is alive and well and the election seemed to be a catalyst to more separation. “People are finally waking up to the reality of the world, you know, racism didn’t just begin when Trump was elected, this is something that is very ubiquitous and something that we all can acknowledge" Davis said.

Although he focused mainly on minorities and different marginalized groups, Davis seems to have a lot of love for everyone around him of all colors; he said he hopes that with the help of his group, the participation of his fellow classmates and the grace of God, that he will continue to be a voice for the rights he stands for.

Brian Davis wants to reach a certain audience when discussing politics, but he does not shy away from people who may disagree with his vision. He spoke about white people (with no specific person in general), saying that the marginalized need their help. “Now it is time that our white allies, who’ve recognized their privilege and owned up to it, to use their platforms to help further this agenda in creating a equitable and qualitative world," he said. Davis said he believes that people who are angry following the election need to step up and use their assets to fight against their fate, not only for themselves, but for the people he and many others believe Trump is against in this "war of life."

I am a Broadcast Journalism major addicted to football, Steelers to be specific; minoring in Sociology and currently wrapping up my degree while working full-time for Passavant Memorial Homes & Services helping to aid and take care of the intellectually disabled. In the future I plan to work with multimedia in anyway related to sports, I also plan to join the reserves and continue my education by enrolling in graduate school.

Recovering in the kitchen