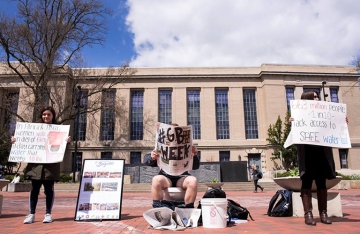 On April 12, 2016 Cameron Hart had his first front page photo at The Daily Collegian, the student newspaper at Penn State. The photo was was taken of Penn State Global Brigades. They were raising awareness about water inequality outside the HUB-Robeson Center.

Hart, the son of a minister, was able to secure an internship over the summer as a Penn State student in the field of business, however; that’s when he realized who he really was.

“After sitting at a desk all summer, I realized I hated it,” says  Hart about the business major. He said he began to doubt the path he had chosen and found a new home in photography.

Once Cameron had the camera shutter button under the tip of his finger, it sparked a realization that he was always supposed to make it past the limits of Jersey Shore.

Through his degree program, coupled with a natural talent, Hart has been able to travel to many places throughout the world including Paris, while even making a trip to Cuba with the Penn State Baseball team several months before United States President Barack Obama hit Cuban soil. Hart is also one of two photgraphers chosen from the program to attend the Paralympics in Rio, Brazil this summer.

“Sometimes I’ll be walking past something and I just cant help myself I have to take a picture of it because I know I'll regret it later if I dont.”says Hart, who documents his pictures on his Facebook page.

After graduation, Hart says he hopes to continue traveling the world and hear stories from all types of people.

Growing up in a small town in Pennsylvania, Hart says he had no idea about his love for visual jounralism. Never feeling like he fit in with the other kids in his high school, he says knew there was a vast world out there for him to explore and Penn State helped him find it.

I am a senior at Penn State University, currently studying multimedia journalism. I hope to one day become a content creator for a news website or magazine. I am proficient in video editing and news writing.

Her Dream to Stay