Betsy Taylor moved to the State College area three years ago to be closer to family. She later learned her family has a stronger connection to the university than she suspected. 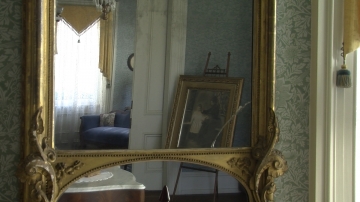 After arriving in State College, she decided that she wanted to visit the Centre County Furnace Mansion.  The mansion was once her father’s cousin’s house – known at the time as the Hensey Residence.  She had visited the mansion as a child, but felt a much stronger connection as an adult.

Taylor now works at the Centre County Furnace Mansion as a docent – a guide or interpreter of historical artifacts.  She works at least once a week, giving tours or working in the mansion gardens.

Centre Furnace Mansion was built in 1830 and was the residence of  Moses and Mary Irvin Thompson.  Upset at his lack of education as a younger man, Moses Thompson decided that he would invest a couple hundred acres of land east of his mansion that he had to help found the Farmer’s High School of Pennsylvania.

Taylor says that all of the items in the house are either donated by family members of the Thompson family or private collectors.  She says that she gets a haunting feeling whenever she realizes that her mother’s hat boxes are pieces of interest in the house, donated by her family.

An avid lover of reporting, history, and the arts, Alex Wypijewski is a senior majoring in Broadcast Journalism and minoring in Recreation, Parks, and Tourism Management.  He is also very interested in travel journalism and hopes to one day report on experiences found in different parts of the world.  As a native of the famous historic town of Gettysburg, Pennsylvania, Alex is also interested in reporting on stories with a historic spin to them