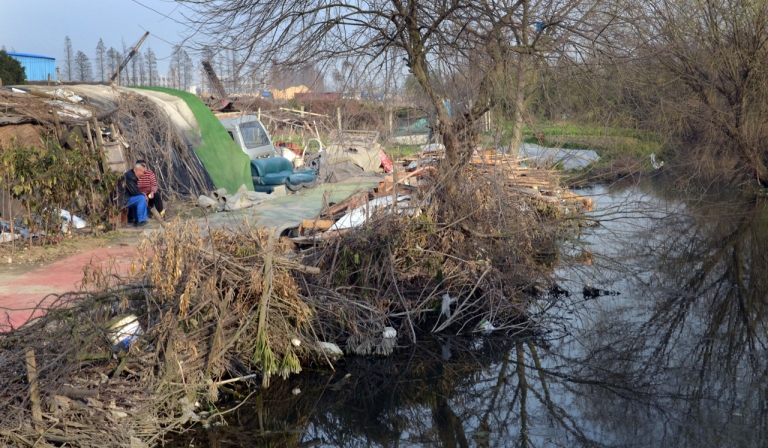 NANMEN, China — In this small village about 25 miles from Shanghai, the smell of paint and gasoline hangs heavy in the stagnant afternoon air. Small dogs run in the streets wide enough for only a small car. Children with worn Disney backpacks walk home from school, avoiding the trash tossed into the street gutters.

It seems to be a village much like any other in rural China. But there is something different about Nanmen that weighs on villagers minds.

Nanmen is one of more than 400 so-called “cancer villages,” areas so polluted by waste and factory run-off that its citizens are in danger of contracting the deadly disease. The villages are part of the dark underside of China’s industrial might, places that critics, environmentalists and foreign experts believe that the government has sacrificed in its rush to prosperity.

“Many cancer villages can be proven, even though the government may choose to not acknowledge it,” said Dong Jiang, an environmental activist who has studied the link between pollution and cancer in places like Nanmen.

The term cancer village is not widely recognized by the academic world, but it is a phrase that has been picked up and used to describe the poor living conditions by the media, citizens, and most recently, the Chinese government.

Government officials and some academic experts argue that because the exact causes of cancer are so difficult to trace, there is no direct correlation between the cancer in rural villages and pollutants. But environmentalists like Dong say that the connection is clear, if people take the time to look at the statistics.

And for those who have lost loved ones, there is no doubt at all. 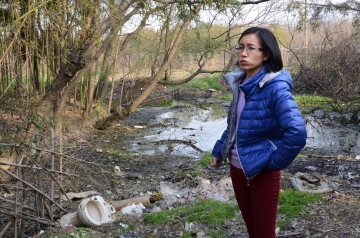 It has been more than two years since Wang Qin said goodbye to her 22-month old daughter, who died five months after she was diagnosed with leukemia. A day doesn’t pass, Wang Qin said, when she does not think of her baby’s courage and intelligence in the face of pain. “I think of my lovely daughter all the time,” she said. “She could say [the words] mom and dad, grandpa ... she was quite smart.”

Wang and her husband, Lu Weiming, spent thousands of dollars in medical bills and travel expenses to get their daughter, Wang Bole, the care she needed — but nothing worked. Her daughter slipped away in front of them, never fully recovering from the fever that took her life.

Today, more than two years later, Wang is still fighting the Chinese government for compensation for her loss and recognition that a nearby waste collection factory that appeared, seemingly overnight, be held accountable for its pollution.

She remembers the man who became blistered and fainted soon after touching the run-off water from the factory. Wang said the elderly are the most susceptible, as the government can often overlook their deaths or blame it on natural causes. Other families tried to move away before the disease could take them, too, but not all were that lucky.

Part of Wang’s struggle is getting the government and scientific community to acknowledge the relationship between specific pollutants and cancer villages like Nanmen.

Professor Song Weimin, of Fudan University in Shanghai, said the connection between the cancer villages and pollutants is hard to prove, as the list of physical, chemical and biological factors continues to grow. Song, who specializes in environmental health, also said that the Chinese government is investigating the village pollution, but hasn’t released any official statistics as of yet.

“It’s hard to find evidence,” Song said. “Some organizations are afraid of getting in trouble because if they find that a factory is linked to cancer, it will lead to a lawsuit.”

Activists like Dong Jian, vice-president and secretary general of Future Green Youth Leadership Council, say the proof exists but the problem is that the government chooses to ignore it.

“Yes there is a direct connection,” Dong insists. “You have to compare the cancer rates before the factory has been built versus after the factory was built. Then you can see the rise.”

Progress may be slow but there has been some movement. In a report released Feb. 20, 2013 by the Ministry of Environmental Protection of the People’s Republic of China, the government for the first time acknowledged the existence of cancer villages clustered around the outskirts of major cities and factories.

Dong says it is not enough. “Although the government has the responsibility to acknowledge cancer villages and pollution, sometimes they don’t do what they say they will,” he said.

Nanmen villagers know this story well. A village that Wang said was once removed from the rest of China became suddenly transformed into a place filled with pollution and disease.

Villagers began to notice a change in 2002, when a small landfill began to take shape in the middle of Nanmen and soon gave way to a waste collection factory that virtually appeared overnight, Wang said..

“The water was colorful, all kinds of colors,” Wang said. “The water smelled terrible. Creatures couldn’t live there anymore.”

The Zhaohong waste collection factory moved out more than two years ago, but Dong Jian said the negative effects on the environment and people remain.

Take Wang Qin’s elderly father. He can’t afford to move from the village, nor does he want to. The streets he has called home since he was a child aren’t something he is ready to give up for the sake of his health.

The pond that once housed fish and wildlife is now home to a toilet basin situated against thick, black mud and leftover trash. Residents can no longer swim in the polluted water that scarcely resembles the place Wang Qin once swam.

Villagers say conditions are getting better, but the effects of the longtime pollution are hard to gauge. Trees are only beginning to resume growth two years after the factory’s removal and the site where the Zhaohong waste collection factory once stood is barren and avoided. 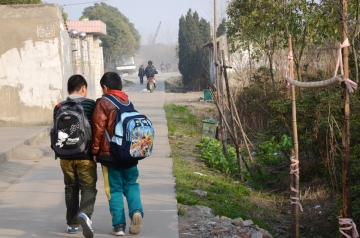 Home is no longer a place Wang Qin can stomach, either.

The small apartment in Songjiang — a few miles from her home village where she and her family now reside — may be more expensive, but she said she feels better knowing her son can grow up away from what she fears are deadly pollutants.

Wang also hopes to try for another child, though doctors tell her that at the age of 35, the risks alone may be too much, or so the government says.

Over time, Wang has grown less willing to hear the government promises as time has shown her they aren’t always true.

Wang has fought her own battles in the court system, also to no avail. With every attempt comes a loss, she said, and more money wasted in trying to fight a government which won’t change.

Over time, residents of her village have been less willing to support her family because of the government repercussions they may face. “The judge told me that he feels very bad for me and he wants to help, but that is the system,” Wang said. “[He said], ‘you must lose because we won’t let someone who charges the government win.’ ”

Even though Wang says she has felt the pressure to give up, she and environmental groups such as Dong’s are continuing their fight to prove the connection.

Studying the particular chemicals the factory releases can also aid in stopping a factory from continuing production near a village or community, Dong said. By providing doctors and medical experts the specific chemical elements, it’s often possible to prove the relationship, he said.

But for Wang, who will never get to see her daughter grow up, the recognition must come.

Wang thinks about her daughter every day. She is reminded of her in the walls of their small apartment bought specifically for the bright, young girl who could speak before the age of one. Wang said she didn’t want her daughter to grow up in a place so plagued with disease.

“The government waited for eight years until tragedy happened when my little daughter died,” she said, slamming her fist against the table. “The right of life is the basic right of a human being. Whether you are rich or poor, you much assure that children are safe. They are the future of our country.”