Clairton gets Bear’d up for football


CLAIRTON, PA -- The impact of the decline of the American steel industry is all too real in this Monongahela River Valley mill town just 15 miles south of Pittsburgh.

At the midpoint of the Twentieth Century the “City of Prayer” was a thriving blue-collar community. At its peak in 1950 more than 19,000 people lived in Clairton. It was a boom town for car dealerships, movie theaters, restaurants and stores.

While it is still home to the largest coke manufacturing plant in the nation, fewer than 7,000 people still live there. Most of the plant employees reside outside the city limits.

While population is down, violence and drug use are up. The city's poverty rate is roughly twice the state average.

But on Friday nights in the fall the community turns in to a sea of orange as fans -- young, old, rich, poor, black, white -- get Bear'd up to support the local high school football team. 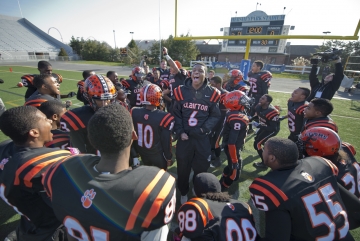 This school year was especially sweet as the Clairton Bears ended their season not only with a fourth consecutive PIAA Class A state championship, but also with a Pennsylvania high school record 63 consecutive victories.

Thousands of towns across America share a collective excitement for high school sports, but in Clairton football truly is life. By adorning themselves with orange and black apparel, members of the community find unity, success, and a glimpse into a better past, through the passion they see played out in young men performing under the stadium lights.

City leaders say the unparalleled success of the Clairton football team in recent years has provided a ray of hope, not just to the struggling community, but more directly to the young men for whom success on the field offers an opening for a bright future.

"We're talking half the town, on Friday night, is all bear'd up," Mayor Richard Lattanzi said. 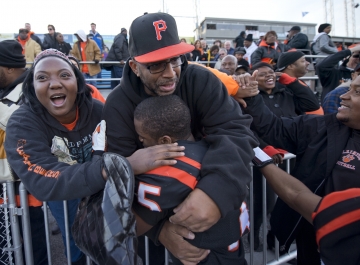 For generations of Claritonians, work opportunity at the bustling steel mill hugging the city’s main street provided a hard-working, yet reliable future. For children growing up in Clairton today, hard work and determination tossing a football on the streets provide an incentive to stay in school so they can take advantage of education as an opportunity for a future. The school district boasts a 77 percent graduation rate, far better than surrounding Mon Valley communities with similar poverty and crime rates.

"If it wasn't for football, I don't know if I'd be going to school or not," said Bears receiver Titus Howard, who has earned an athletic scholarship to the University of Pittsburgh.

Members of this year's record breaking and soon-to-graduate class of seniors have been strapping on football pads since they were six or seven years old. They appreciate the support they're received from the community -- support that's helped them to stay out of trouble and in class long enough to contemplate life beyond the streets. In a place with fewer and fewer opportunities, football has provided the cement that continues to hold their community together.

The town of Clairton is nestled into hills overlooking the Monongahela River and the Clairton Works -- the largest coke works in the United States.

Bear pride is visibible on signs and banners throughout the Mon Valley town. 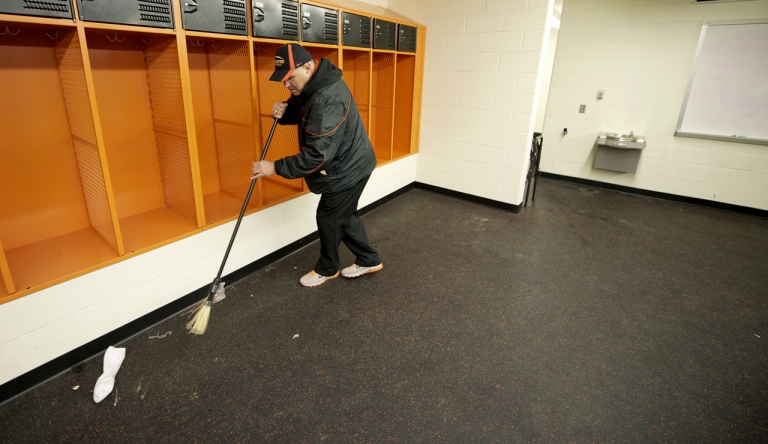 Clairton High School head football coach Tom Nola is always the last person out of the locker room following a game. That's so he can make sure everything is tidy, on this night even as the other coaches and players have left to celebrate a PIAA quarterfinal playoff football victory at Golden Eagle Stadium in Somerset, Pa. The Clairton Bears defeated the Berlin Mountaineers 53-0 in that game, en route to a sesaon that would end with a Pennsylvania record 63 straight victories and a fourth state chamionship.