ComMedia in Brazil: Scenes from Rio

Photo posted March 13, 2012 in News, Brazil by College of Communications

Rio de Janeiro has a distinctive urban personality. Students made these images while doing field work during Spring Break for Comm 402 International Reporting.

View more pictures and read about Rio in ComMedia in Brazil: The blog. 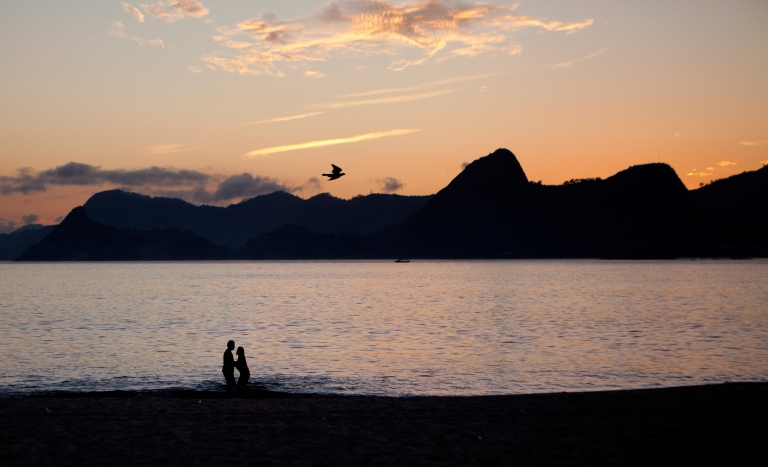 A couple plays in the ocean as the sun rises over Flamengo Beach in Rio de Janeiro on a Saturday morning. / Photo by Kelley King 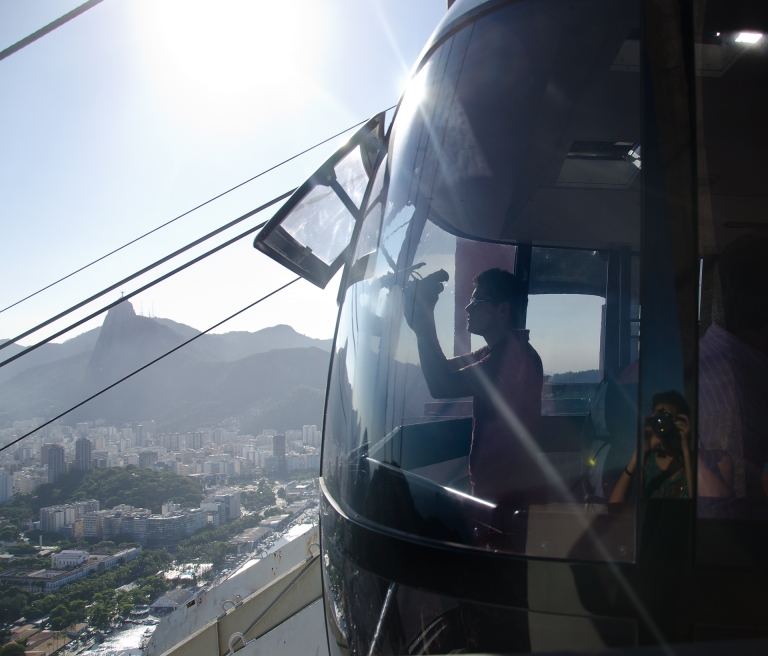 Cassie Hom is reflected in the side of a cable car as she photographs fellow student John Andreadis making video from inside the car, which is docked at an observation platform on Sugarloaf Mountain in Rio de Janeiro. / Photo by Cassie Hom 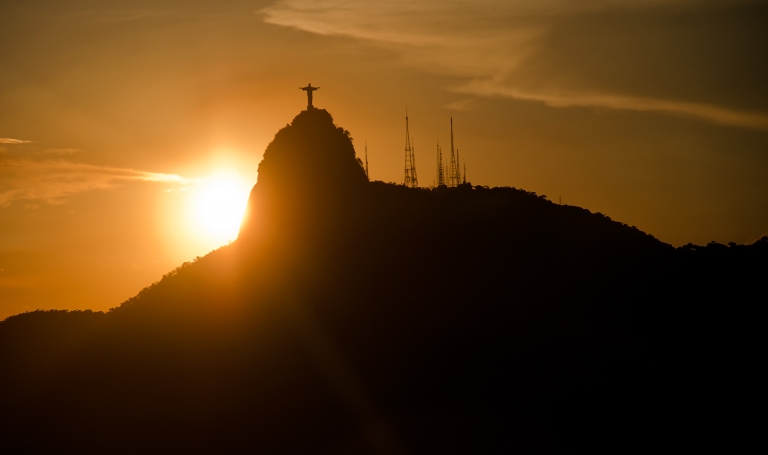 The sun sets behind the statue of Christ the Redeemer that overlooks Rio de Janeiro. / Photo by Cassie Hom 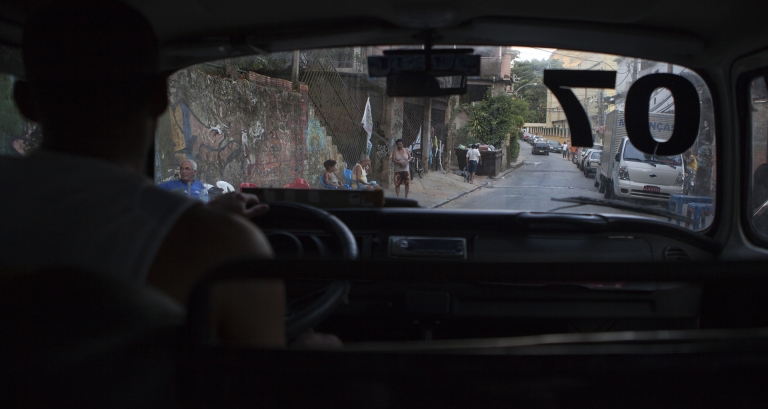 The view from the back of a "favela van" carrying passengers downhill through the Tabajaras favela that overlooks the Copacabana neighborhood in Rio de Janeiro, Brazil. / Photo by Kelley King 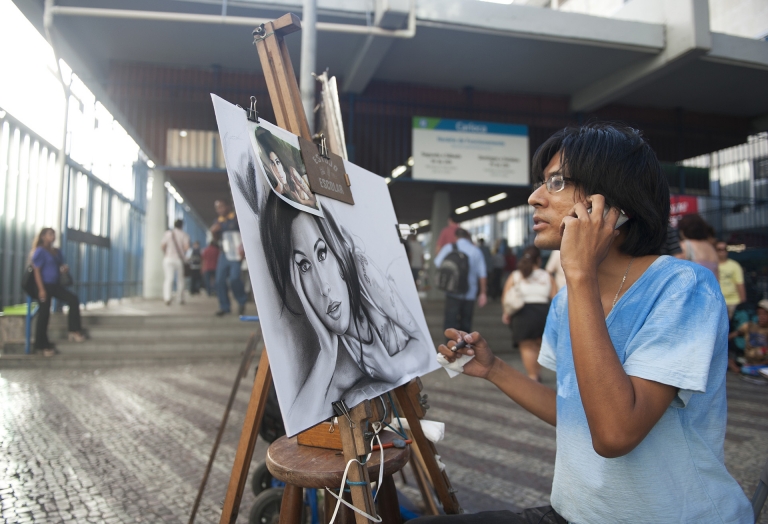 A street artist works on a drawing of recently deceased singer Amy Winehouse outside of a metro station in Rio de Janeiro, Brazil. / Photo by Kelley King 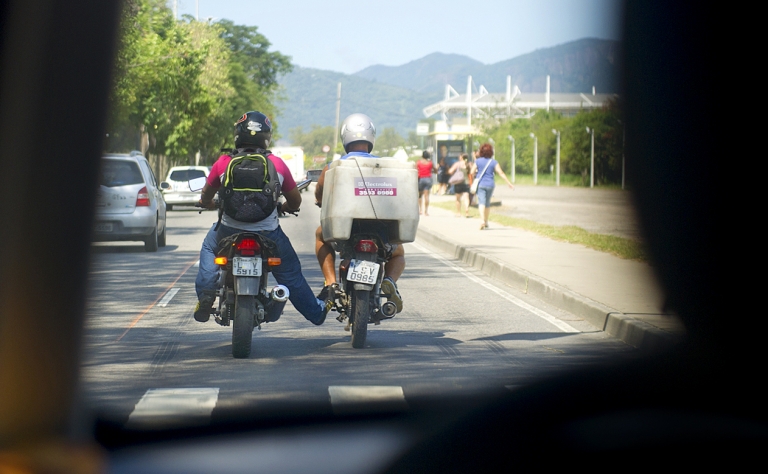 Motorcycle messengers, easily identified by the boxes attached to the back of their two wheelers, are everywhere in Rio de Janeiro. They zip fearlessly through slower traffic, often scooting down lane lines and between cars. This motorcycle messenger, spotted from the back seat of a cab in the west end of the city, appeared to be out of gas. Instead of calling for a tow, he resumed his journey with a little help from a friend. / Photo by Chloe Elmer 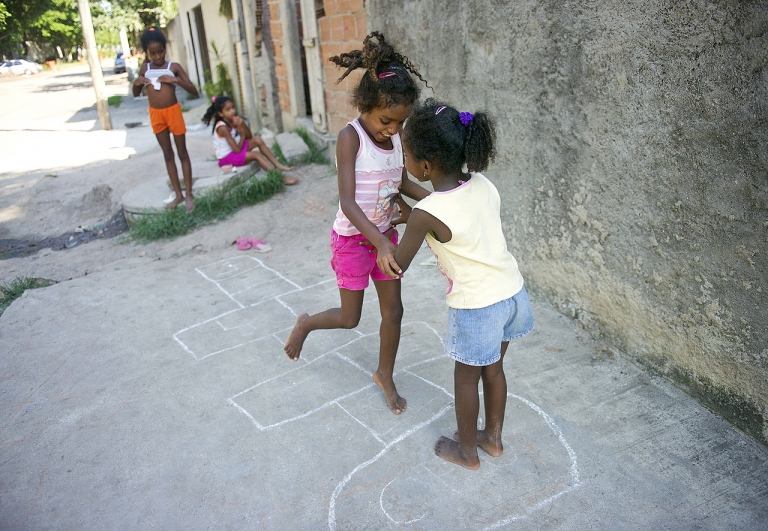 From right, sisters Joyce, 6, and Raissa, 7, giggle and embrace during a game of hopscotch while cousin Maria Eduarda, 6, and sister Thamires, 10 watch in the background. The girls live in Vila Autodromo in Rio de Janeiro, Brazil. The city is trying to relocate the people who live in the favela because it lies in an area slated for redevelopment prior to the 2016 Olympic games. / Photo by Chloe Elmer 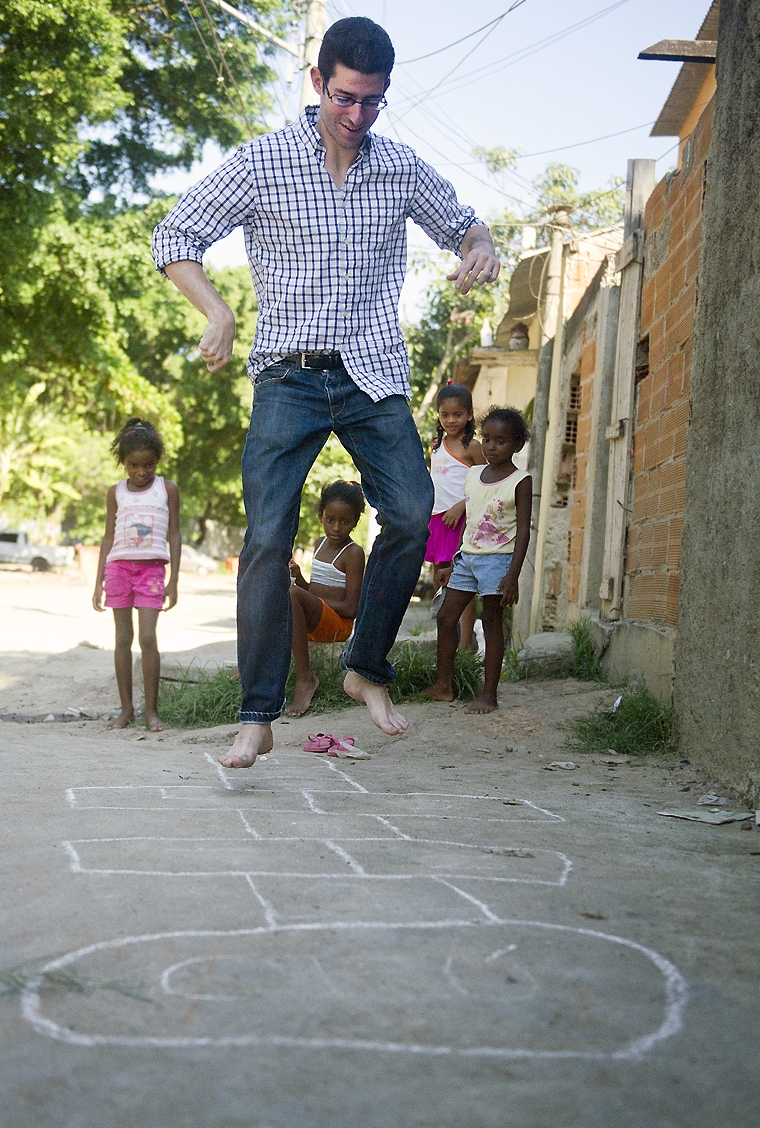 A group of young girls watches ComMedia reporter Alex Angert play on their hopscotch court in favela Vila Autodromo in Rio de Janeiro, Brazil. Angert is reporting on the favela, which the city is trying to raze to make way for Olympic redevelopment. / Photo by Chloe Elmer 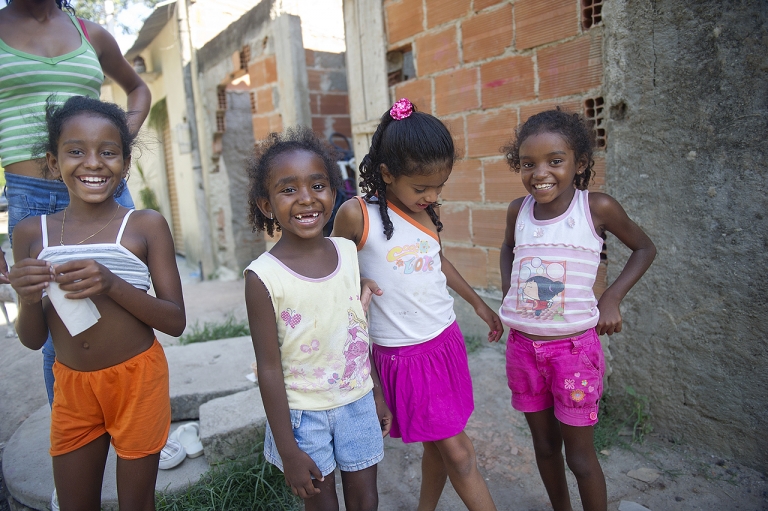 Sisters Thamires, 10, Joyce, 6, Raissa, 7, and cousin Maria (pink skirt), 6, giggle during a game of hopscotch in Vila Autodromo in Rio de Janeiro, Brazil, a favela that the government is trying to raze because it lays in the path of planned 2016 Olympic development. / Photo by Chloe Elmer 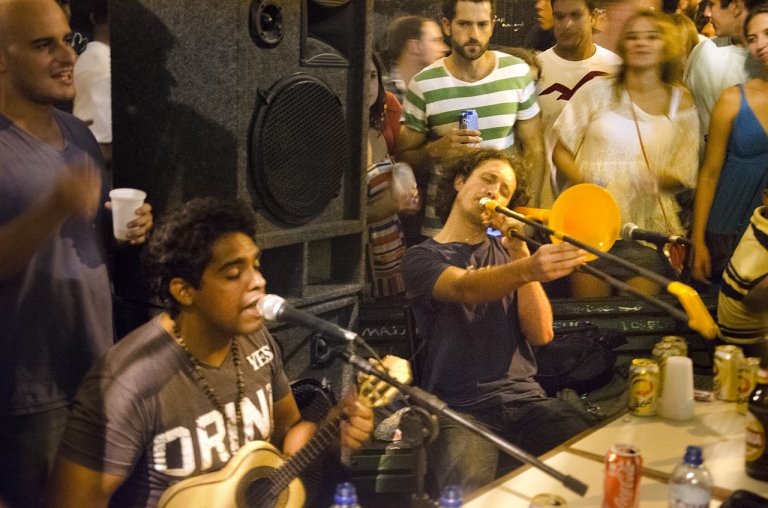 Musicians from the band Samba de Lei honor the tradition of Afro-Brazilian by playing traditional samba at Pedra do Sal in the Centro neighborhood of Rio de Janeiro. / Photo by Cassie Hom 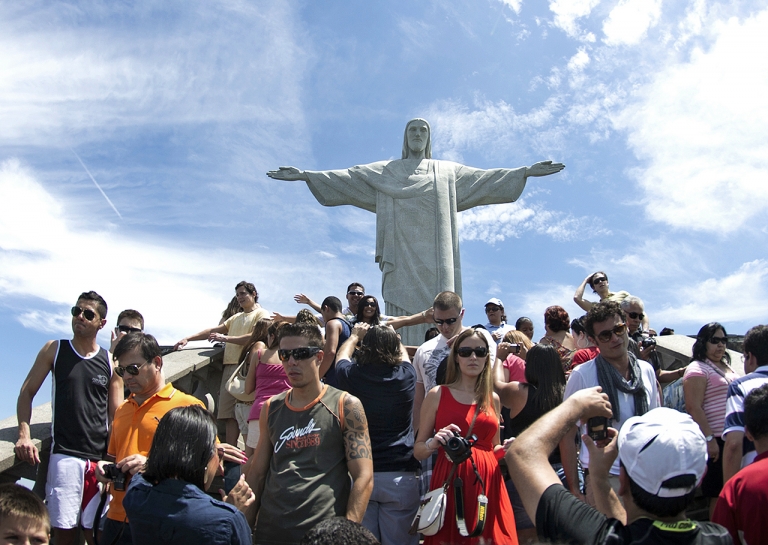 Tourists visit the statue of Christ the Redeemer atop Corcovado mountain in Rio de Janeiro, Brazil, on a Saturday afternoon. / Photo by Chloe Elmer 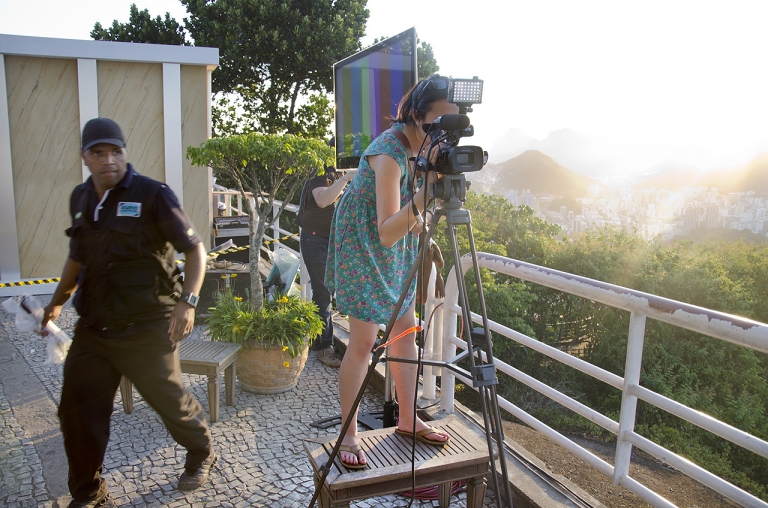 Cassie Hom uses a table to get a better angle while making video atop Sugar Loaf Mountain. / Photo by John Andreadis 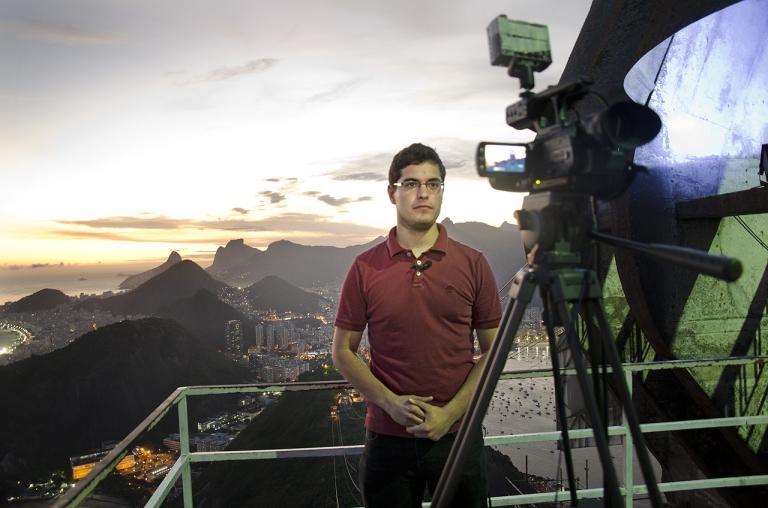 John Andreadis does a stand-up for a story on Sugar Loaf Mountain above Rio de Janeiro. / Photo by Cassie Hom 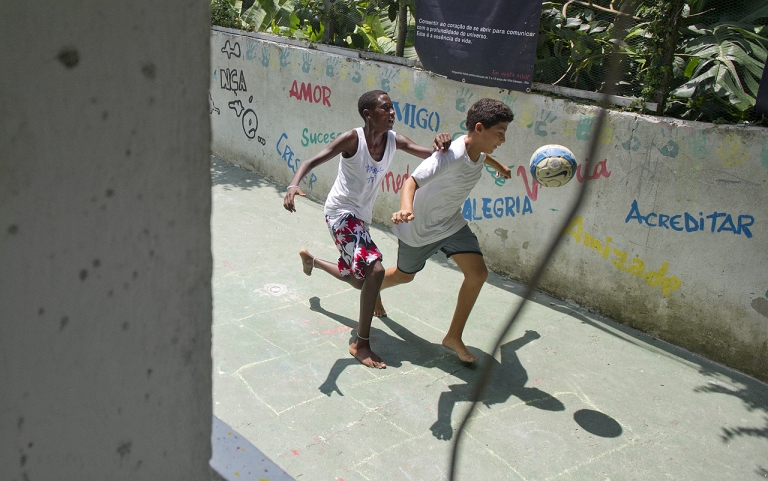 Students play soccer in the courtyard of the Para Ti school in the Vila Canos favela in Rio de Janeiro. The pickup game was one of the sights seen by a tour group walking through the favela, or shantytown, Monday morning. Favela tours are becoming more popular as police units take control of -- or "pacify" -- the communities. The Para Ti school receives a portion of the proceeds from trips organized by Favela Tours, a group that guides people through both the Rochina and Vila Canoas neighborhoods in Rio. / Photo by Chloe Elmer 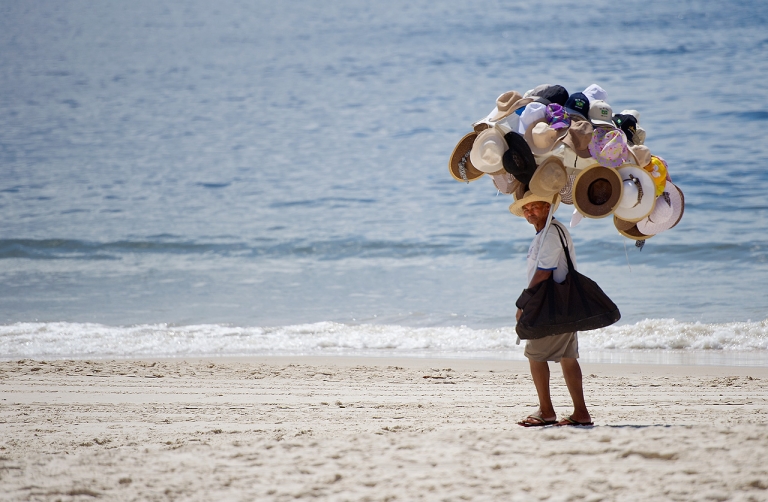 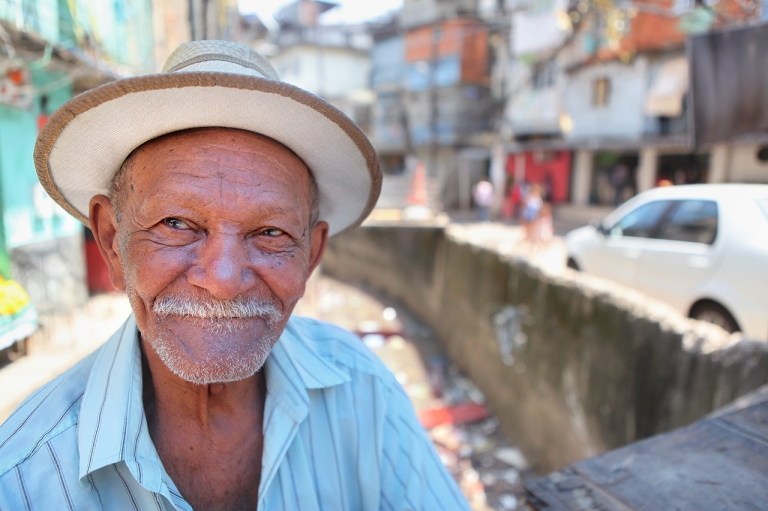 Hertonio Augusto is an 85-year-old resident of the "pacified" Rochina favela. Although police have pushed drug dealers out of the neighborhood, that doesn't mean city services have flowed in. On an 80-degree afternoon, Augusto is seated above an open, active sewer. / Photo by Kelley King 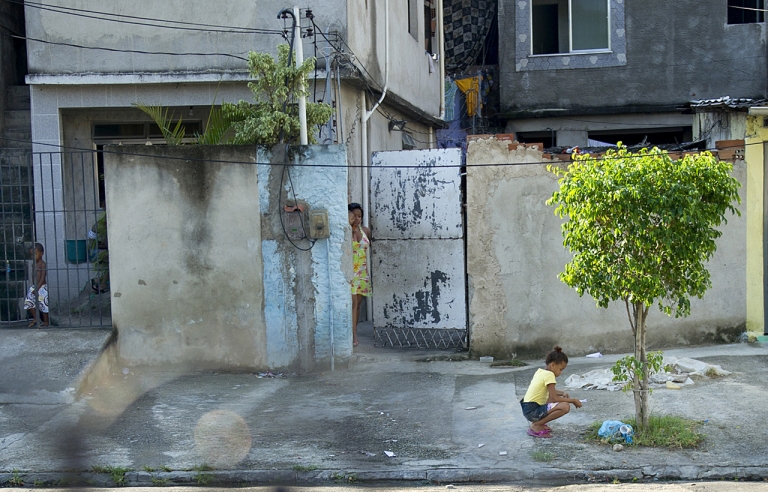 Favelas are areas of Rio de Janeiro where people live despite having no city services. A young girl picks at trash on the ground on the streets of one such neighborhood, called Araja. / Photo by Chloe Elmer 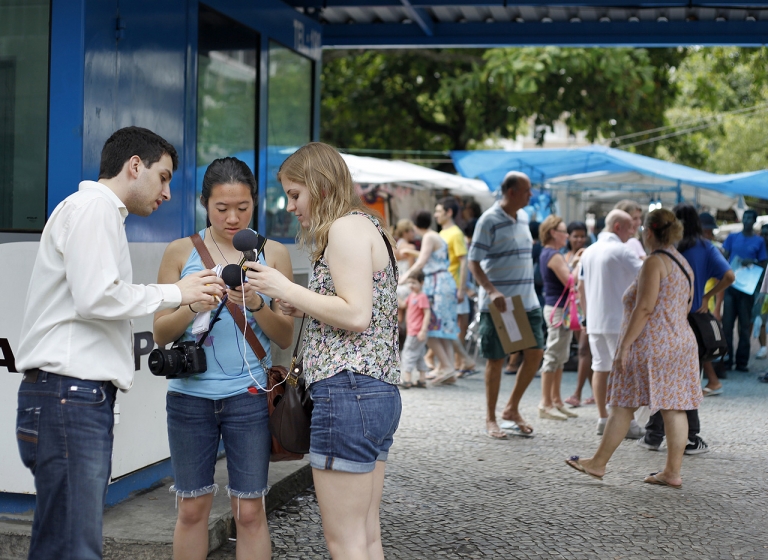 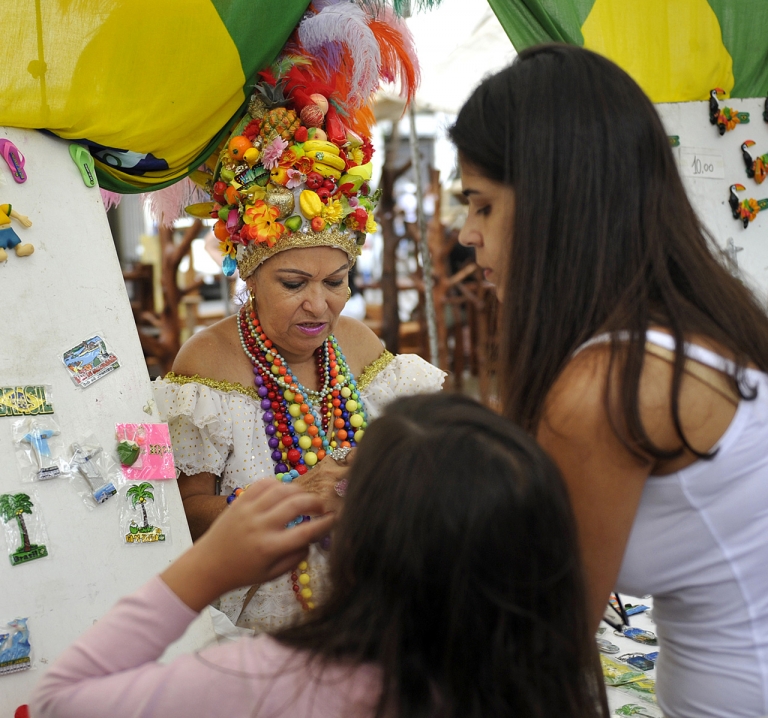 A street vendor wears a Carmen Miranda hat while conducting business with a woman and her daughter at the Hippie Fair on General Osario Square in the Ipanema neighborhood of Rio de Janeiro. Carmen Miranda became Rio's most famous resident outside Brazil when she became a Hollywood movie star in the '40s and '50s. There is a museum in Rio in her honor. / Photo by Chloe Elmer 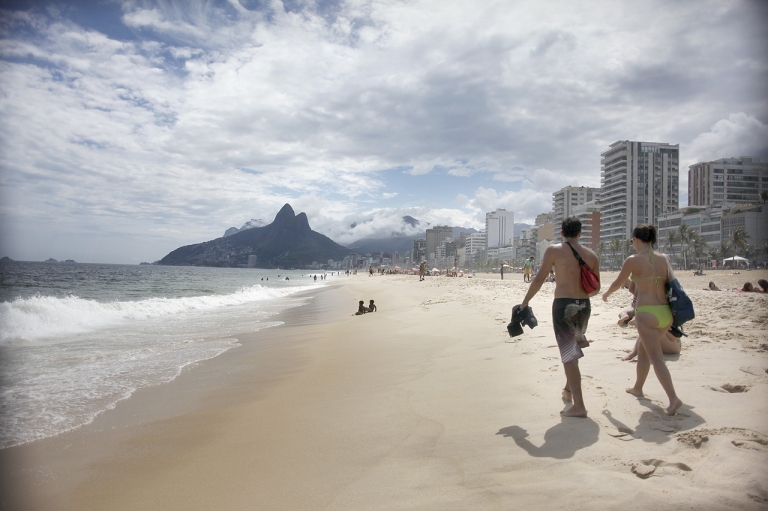 A couple strolls down Ipanema Beach. With temperatures in the 80s -- considered cool at this time of year -- the beaches were relatively empty. / Photo by Jill Knight 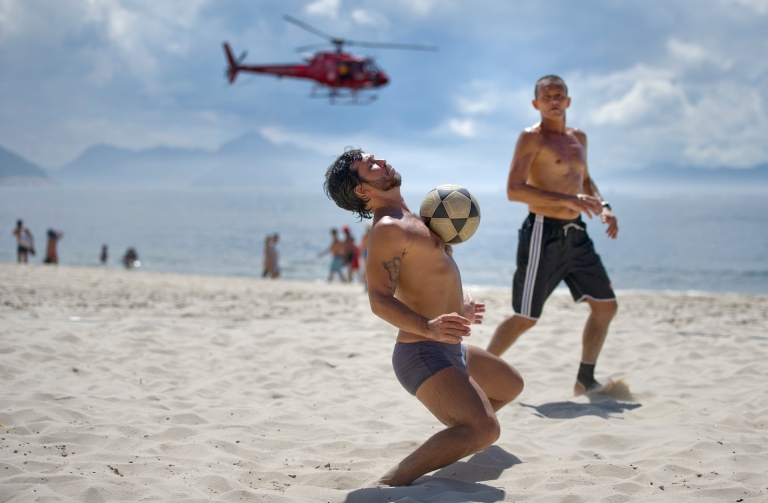 Cassandra Hom is a senior majoring in Broadcast Journalism with a minor in sociology and international studies at Penn State University.  She is a reporter for ComRadio, the Penn State student-run radio station that features news and sports.  Additionally, she is also a reporter and producer for the Centre County Report.  Cassandra is currently a production intern for the Pennsylvania Cable Network.  Recently, she returned from an international reporting trip in Brazil for the McClatchy news service.  In May 2012, Cassandra will graduate from Penn State and then pursue a career in television production.

People say they’re fed up with politics, but they sure do watch the State of the Union