Most newlyweds look forward to sharing a home together after their wedding day.

But Jim and Jackie Rodenbush are not most newlyweds.

Though the two were married this past summer after more than 17 years apart, they continue to remain that way -- at least physically -- due to jobs, children and everything else life throws their direction.

The couple, who originally met in the fourth grade over mathematics and milk breaks, hasn’t experienced the typical trajectory of childhood sweethearts. Much like the unusual qualities of their marriage today, race and religion forced the couple to split toward the end of high school.

Today, Jim doesn’t speak bitterly about the way his life has panned out. His father still apologizes every time he sees Jackie for his rude behavior and judgment long ago, a time where interracial dating wasn’t nearly as accepted as it is today. 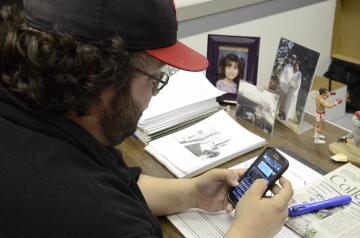 But as Jim will say time and time again, it doesn’t matter.

“You may find this hard to believe, but my personality can be a bit exhausting at times,” he said, smiling. “I’ve never met someone who knows exactly how and what I’m feeling at any given moment and exactly what to say to make it better. She’s perfect.”

As it turns out, sometimes perfection needs a second chance.

Upon the couple’s split, the two went on to lead very similar lives, both attending college and falling in love with other people. Today, both Jackie and Jim share their new life with three children, two from Jackie’s previous marriage and one from Jim’s.

After a life-altering heart attack that forced him to step away from his growing journalism career at the age of 31, Jim took up advising for Webster University’s student newspaper, the Webster Journal. From there, he accepted a job at Penn State, where he currently works today, advising The Daily Collegian and teaching classes at the university.

A two and a half hour drive is all that separates him from his young daughter, a snappy, smart girl who resembles Jim in more ways than one.

“She’s a really sensitive kid, always asking if everyone is OK and what she can do to make it better,” he said, adding that the two even share a similar sense of humor.

In fact, she told her father she didn’t believe him when he announced he was going to get re-married. She even found it a bit “weird.” But when asked, she’ll tell you that “[her] parents are divorced and now Daddy is married to Jackie.”

“A friend of mine once told me that kids are resilient,” he said. “She doesn’t know anything different.”

One day, Jim plans to share an actual home with his wife, one where he can wake up every morning and see the woman he loves snoring next to him. But until that day comes, he will keep on calling, texting and traveling to make this “different” life work.

People often say divorce is harder on the kids than the parents. But for Jim Rodenbush's daughter, Carley, the small tattoo on her father's ring finger could stand for his own name just as well as his new wife's. Despite getting married and changing home locations more than three times, Carley is accustomed to her father Skyping and calling more often than visiting. She says she loves him all the same.