Dancing with the R.A.M. Squad at Penn State 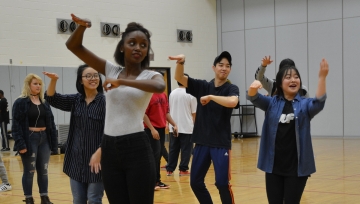 Members learning moves together from choreographers. Photo by Eva Liao

The vice president of R.A.M. Squad, Sara Bien, is a junior majoring in chemical engineering.

“I’ve always loved dancing in my own room or whenever music’s playing, and I actually danced in college," Bien said.

Bien said she was memorized the first time she saw R.A.M. Squad, “I saw them performing at the Family Clothesline, and they performed for two hours, I stayed the entire two hours, just like a fan grilling in the back," she said.

Bien said she went to the dance practice in the beginning of her second semester at Penn State. She ended up staying for three years.

Bien said R.A.M. Squad is an open organization, meaning it doesn’t require tryouts. They accept people of all dance levels, from no experience to advanced levels.

As the vice president of R.A.M. Squad, Bien is responsible for choreoraphing performances. She said kast semester R.A.M. Squad surprised an audience when "Lemont jumped off the stage, on the ground, intentionally because he did like a Michael Jackson kind of move, and he just caught me off the guard. I hope people weren't mad at me, but the audience loved it," she said.

For Bien, her friends at R.A.M. Squad have became her Penn State family. “R.A.M. Squad is like a place of diversity for me, everyone is from a different country, or they are just really different people, and it’s also a place we could all share dance, so there’s like a great common thing that we all like to do,” Bien said.

Members of the R.A.M. Squad videotape themselves as they learn new choreography.

I am interested in both print and broadcast journalism. And I did an internship in a bilingual magazine in Taiwan.