It’s 3 a.m. on a weeknight, but to Sara and Emma*, it might as well be three in the afternoon. They are staring intently at their laptops, unblinking in concentration.  Papers and calendars are spread across the table — proof that their night is far from over.

Sara and Emma are both juniors at Penn State and members of the graphic design program. Penn State’s design program is one of the best in the country and boasts several notable alumni, including Chip Kidd, the man behind the original movie poster for “Jurassic Park.”

The program is known for turning out top designers and for good reason. The curriculum is intense. Students join the program as freshmen and are required to take two years of classes before submitting a portfolio for entrance into the program at the end of their sophomore year.

In Sara and Emma’s class, 48 people applied. Twenty were accepted.

But the challenges don’t end for students when they’re accepted. At any given time, Emma is working on a minimum of three projects at a time.

“For the last month, it’s been four,” she said. 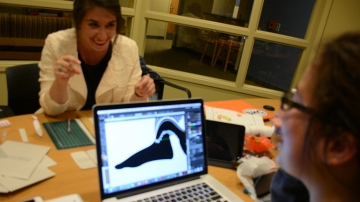 Sara and Emma take a break from their busy schedules to laugh and trade horror stories from brutal professor critiques and the difficulties of file naming. Photo by Mary Chuff.

Some of those projects include redesigning a menu from a local restaurant, designing a t-shirt for the annual Penn State Women’s Basketball Pink Zone game and designing and creating an information kiosk specific to Penn State.

Both Sara and Emma have stayed awake for 48-hour stretches more times than they can remember. Schneider has almost passed out in class from exhaustion several times.

“And there’s not a lot of sympathy for it,” Emma says. Designers are expected to have their projects completed on time, and there are no excuses.

Sara said last semester it wasn’t uncommon to see at least eight designers hard at work at 4 a.m. in the design studio in the Borland Building.

In addition to their classwork, both Emma and Sara fill their already limited free time with additional graphics projects.

Both were members of a merchandise committee for the Penn State IFC/Panhellenic Dance Marathon. Sara is the Merchandise Development Captain for Penn State Homecoming where she is responsible for designing new merchandise for all of Homecoming. She also won the competition to design the Homecoming 2015 logo. She’s also a graphic designer for Valley Magazine.

Emma is a Homecoming Graphic Design Public Relations Captain, and is responsible for designing all branding and promotional materials. She works for the Stuckeman School in the College of Arts and Architecture as well.

Unlike most THON volunteers, Sara and Emma averaged more sleep THON weekend than they had the entire week prior. Sara recalls staying up for three days straight the week before THON in order to complete a project.
And for those that think the graphic design program is playing around on a computer? Well, that’s not the case.

“A lot of people think it’s messing around on the computer…hell no,” Sara said. “A lot of craft…we can bind a book with our eyes closed [and] cut lines like no other.”

Sara's design of the Nittany Lion was chosen by the Homecoming Executive Committee as the 2015 logo. Photo courtesy of Penn State Homecoming.

Emma added that so much of graphic design is about ideation and creating “ideas that people remember.”

The hours are long and the work is difficult. Both Sara and Emma have faced brutally harsh critiques from professors. But despite being in a major that is crushinginly difficult, they keep working.

“What keeps me going is probably the moment when you get it,” Sara said. “So it could be months and months and weeks and hours…of sleepless nights, but when you finally finish that product and that project, and it’s something you’re proud of? It’s a really exciting moment because all of the struggle was worth it.”

*Both preferred their last names not be used in this story

Despite being a part of one of the most respected and demanding design programs in the country, Emma said graphic designers at Penn State sometimes feel as if the student body doesn't understand how much hard work goes into the program. At such an engineering and STEM populated school, some students don't realize the grueling responsiblities of being a designer. Emma said she wishes other people knew that graphic design wasn't about fine art, but rather creating an idea and product that people remember.

Mary is interested in working with multimedia at a print or online organization as a foreign correspondent covering politics, foreign and domestic relations and foreign affairs.

Ryan Breton: Weatherman in the making