SHANGHAI – On Nanjing Road, the home of flagship stores for brands like Apple and Coach, it’s hard to miss the giant Nike billboard that covers the façade of an entire building.

A familiar Nike swoosh, “Air Max,” and then – “Air,” prefaced and followed by # symbols. To social media users – who now comprise almost 300 million Chinese – this serves as a prompt to search #Air# in Sina Weibo, which will return any results mentioning the Nike Air product.

In many ways, the prominence of #Air# in an advertisement on Shanghai’s busiest shopping street mirrors the prominence of social media in modern Chinese culture. Despite heavy internet censorship, millions of Chinese are using microblogs and social networks to stay in touch with one another, share information, and participate in e-commerce.

China already has far more internet users than any other country, with 564 million of its citizens hooked up to the internet. Almost 300 million of those internet users are using social networks and microblogs to stay in touch with one another, share information, and participate in e-commerce.

Weibo, a privately-owned, uniquely Chinese site that has flourished in the face of government bans on access to western sites like Twitter and Facebook, is still subjected to government censorship – which largely contributes to its ability to exist as a tool for non-political purposes.

Microblogs, which translates to “weibo” in Chinese, are sites where users can publish short posts that are limited by a certain number of characters, typically 140 or less. These microblogging platforms are distinct from social networks, like Ren Ren, which impose no limits on the number of available characters in a post.

Although these microblogs and social networks are owned by large media conglomerates and available to all who use the internet in China, these sites are still subjected to government censorship. 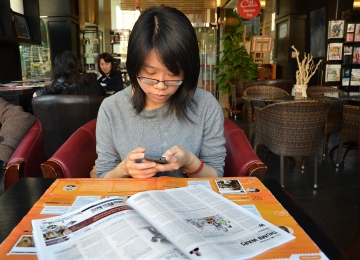 “We have this censorship review system,” said Tracy Teng, a 26-year-old public relations specialist in Shanghai. “If you post something sensitive, it’ll be deleted and prevented from being reposted.”

In January, the Sina Weibo account @Geniune_Yu_Yang – believed to be the account of a Sina Weibo manager – publicly disclosed details about the censorship process at Sina Weibo. As explained in this post, the policy of the Sina Weibo managers is to remove certain flagged comments, with a specific warning that the only alternative to deleting a comment “is that your account will be banned.”

“People who air opinions on social networking sites are very displeased if the opinion is deleted,” said Wang Shaodi, a 38-year-old English teacher at Shanghai International Studies University. “One of my students said some words about the party and had them deleted, and he was very, very displeased.”

But at the moment, microblogs and social networks continue to provide an opportunity for Chinese to connect with one another, consume and share information, and review consumer products.

As Chinese students move to work or study in major cities in China or around the world, their parents are turning to microblogs and social networks as a modern way to connect with their children.

“Social media can facilitate older people connecting with their children who may be studying or working far away,” said Baohua Zhou, a professor at Fudan University who studies news media’s impact on political institutions. “It can increasingly help parents still living in rural areas to be able to connect with their children in urban areas.”

Yinfang Fu, 58, the mother of a graduate from Fudan University in Shanghai who moved to Singapore to study journalism, was inclined to use social media as a way to connect with her daughter.

“In China, if you want to call someone abroad, you have to open an international account, and that’s not cheap,” Fu said.

Fu’s eyesight is poor, so she turned to Skype in order to keep in touch with her daughter. But that wasn’t her first choice.

“For us common people, the site ‘QQ’ is very popular, especially among people whose kids who have moved far away,” Fu said. “A lot of my friends use QQ to contact daughters or sons who have gone to study or work abroad.”

Beyond a means of keeping in touch, microblogs and social networks in China are used to share ideas.

“These are platforms where we can get diverse information, discuss things, learn from experts in other fields, and also maintain friendships,” Zhou said.

Robert Deng Jianguo, a journalism professor at Fudan University who specializes in social media, says he has seen his students use both microblogs and social networks to share ideas.

“Two years ago, not many students used Sina Weibo, although it was and is very common for teachers like me to use microblogs,” Jianguo said. “But now, I got them interested in Sina Weibo, and students who have been using Ren Ren say that the attraction has diminished.”

Social media in China also appears poised to capture the vast potential of advertising in a country that has established itself as an economic superpower with a rapidly expanding class of consumers. 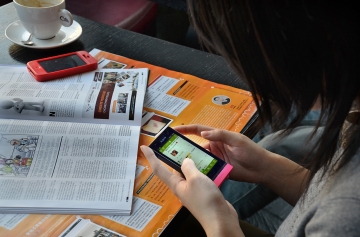 For her purposes, Teng uses social media platforms to coordinate advertisements and monitor what people are saying about her clients’ products.

According to a recent report by McKinsey & Company about Chinese microblog and social media user trends, 30 percent of social media users “use social-media sites to learn about products and services that they want to purchase.”

“As e-commerce rises, a compelling opportunity for brands will be to prompt immediate purchases online by consumers searching for product information using social media,” they write.

Given geographic trends in social media use, it makes sense that brands like Nike are employing social media terms in their ads appearing in cities like Shanghai.

According to the same McKinsey & Company report, which references a recent survey of 5,700 internet users in China, 95 percent of those internet users living in the large urban areas of Shanghai, Beijing, and Guangzhou are registered on a social media site.

And though reported incidents of citizens using social media to comment on social injustices might be becoming more frequent, according to a June 2012 study by King-wa Fu and Michael Chau, two University of Hong Kong professors, those who use microblogs or social media networks to comment on social injustices “seem to comprise a tiny portion of the overall microblog environment.”

Until something changes with the censorship dynamic, Chinese will continue to take advantage of social media mainly to keep in touch with one another, consume and share information, and participate in e-commerce – though through what medium they’ll do that is up for debate.

“In coming years, I think [Weibo] will become much more popular, although who knows?” Zhou said. “I’m sure there will be something new after Weibo.”

The public cost of the flu