More than 30 years in the Marine Corps; former public affairs officer for the Office of the Secretary of Defense; Marine Corps spokesman; photographer for several United Service Organizations tours; Penn State sports photographer– the list goes on and on.

Penn State communications senior lecturer Steve Manuel “does really cool things,” as he puts it. He’s traveled all over the world and captured some of the military’s, and Penn State’s, iconic memories through a camera lens.

“I think [Manuel’s courses and teaching style] attests to how much he cares,” senior public relations major Anthony Hunt said, “about Penn State, about the nation, about us.”

Manuel enlisted in the Marine Corps right out of high school and quickly adapted to a disciplined lifestyle. He served in Hawaii, Pennsylvania, New York, Virginia, North Carolina, Florida, and Vietnam. While serving outside of Philadelphia, he was asked to photograph an event where Marines handed out toys to Vietnamese orphans as part of the Toys for Tots initiative run by the Marine Corps. The nonprofit organization distributes toys to children whose parents cannot afford to buy them gifts for Christmas.

During this event, Manuel stumbled upon his photojournalist career. He decided after the Toys for Tots event that at the next place he was stationed he was going to go into combat photography.

From 1976 to 1979, Manuel served as a photojournalist in the Marine Corps first in Cherry Point, North Carolina and then Honolulu, Hawaii.

After getting his bachelor’s degree from Penn State in 1984 and completing officer candidate’s school, he worked his way up to the public affairs officer position.

During his years as public affairs officer from 1969 to 1996, he responded to media queries and planned responses and prepped for the press on exercises, operations or specific event carried out by the Marine Corps.  His region for this work covered China, the Korean Peninsula, Japan, the National Security Agency and POW/MIA Affairs.

His travels didn’t stop there. His photography skills took him on several U.S.O. tours including the Iraq war in 2008 and recently to Qatar, Bahrain and Abu Dhabi in 2013. The U.S.O.’s mission is to “provide moral, welfare and recreation-type to uniformed military personnel.”

He photographed celebrity performances and athlete visitations for the troops overseas. For example, he photographed the event when General Ray Odierno, who at the time was the commander of American troops in Iraq, shaved Stephen Colbert’s head on his late night talk show.

He also attended tours with comedian Dan Cook and the Dallas Cowboy cheerleaders.
After a long, colorful and disciplined career, he finds himself back in Happy Valley in hopes of passing along his expertise to the next generation of the American working force.

“My idea is that, if you can pass along all that experience and you get to one kid out of twenty in a classroom,” Manuel said. “I think you’re really successful.”

Students who enroll in his public relations media and methods course are required to do a “hot seat” activity– a mock press conference in which the student is the spokesperson. Students receive an outline of information about a sexual assault case that occurred in Okinawa, Japan by three Marines. 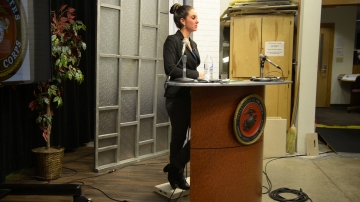 Standing at a podium surrounded by buzzing lights and cameras, students answer questions about the ins and outs of the case from other students and faculty who pose as reporters.
Senior public relations and psychology major Zaynab Yousuf said she’d heard stories of students fainting during hot seat because of the stress. Yousuf herself didn’t feel quite that anxious leading up to the hot seat, but she did find it hard to keep her cool under the many stress factors surrounding the activity.

Although students know about this nerve-racking activity going into Manuel’s section of the class, they choose to take it.

Yousuf and Hunt said that after completing Manuel’s class, they feel confident in their capabilities and reassured that they are walking out of college with real-world experience.

Students like Yousuf and Hunt are why Manuel says he chose to settle down in State College. He has stories to tell and a wide range of experience to share. Here at Penn State, he has a new generation of people willing to listen.


Manuel’s experience in the Marine Corps reflects on the way he teaches students and what he expects from them. His long military career took him all over the world and introduced him to photography.

Taylor is majoring in Print Journalism with minors in English and Spanish from Irwin, Pa. She is a reporter for The Daily Collegian and sports writer for the Lion’s Pride Sports Blog. She interned with advertising agency Beyond Spots & Dots in Pittsburgh, Pa. where she had the opportunity to work with the digital and marketing teams. Taylor is currently working on a blog for Penn State’s Network on Child Protection and Well-Being explaining its research leading up to its 2015 fall conference. Taylor hopes to work for a magazine translating research and information similar to what she is doing with the Network blog.