Story posted November 5, 2019 in News by Bellisario College of Communications

Journalism students in the Donald P. Bellisario College of Communications are reporting live on Election Day 2019, an off-year contest that will shape Centre County government for the next few years that they will be students at Penn State.

Coverage is presented in reverse chronological order as the day progresses, in a timeline and in a photo gallery. 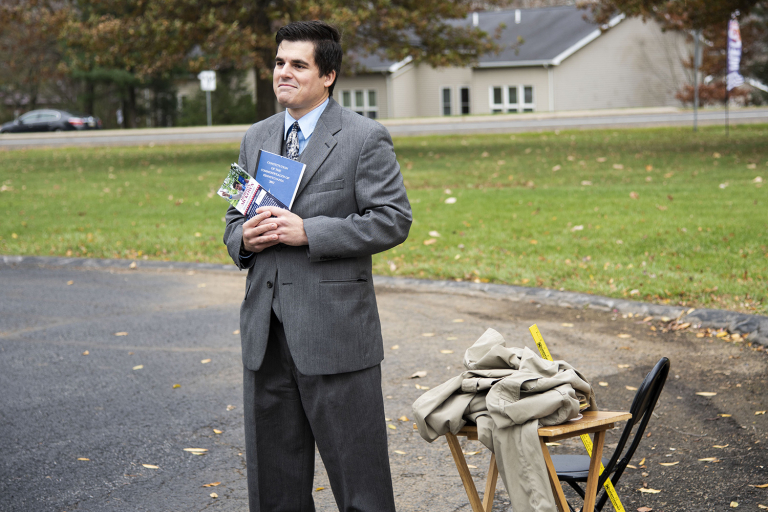 Hobson McKown, 33, waits with his election flyers and the Constitution in hand for voters to walk into Park Forest Baptist Church on Carnegie Drive. The Centre County sheriff candidate was out at 10 a.m. that morning to show his commitment to engage with his audience and stand up for the little guys. “Since I’m a small force, if I’m not out here, people don’t know I exist.” McKown said. Photo by Korinn Harris

Despite a light turnout, dedicated campaigners lobbied for votes until the polls closed. 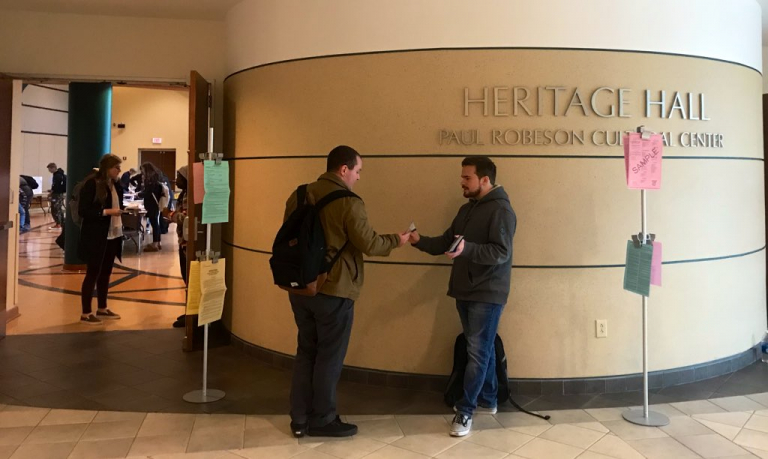 A student does some last-minute stumping for his candidate outside a polling place at the HUB-Robeson Center. Photo by Ava Marie Rash Via Twitter

In Hong Kong, democracy is being endangered by pressure from mainland China. A student from Hong Kong reflects on his evolving view of elections in the United States.

Some students see an obvious motivation for their classmates to vote,

1:45- College of Democrats member, Colin Mcgee, says he wants officials elected who are more lenient on college students. He believes the local officials elected have more influence in their areas. #commvote2019 pic.twitter.com/KCMgaSmNNC

Other students, saw less of an obligation.

4:25pm: With under 4 hours left until polls close, the elections will not be recieving a vote from one man. See his reasoning why below... #COMMVOTE2019 pic.twitter.com/p3fuuH0KGx

For Olivia Philips, voting is a civic duty.

1:34pm Senior Olivia Phillips says, “I voted because not everyone gets the chance to and if you’re able to go vote you should because it can help others in your community.” #COMMvote2019 #psuvotes #comm497 #pennstate

3:55 p.m. : Matt Shaw (graduate student- aerospace engineering) arrieved at the St. Paul's United Methodist Church to exercise his right to vote. It only took Shaw less than 10 minutes to do the process, he says that everyone that has the possibility to vote should do it for their own good and the good of the country. #Commvote2019

Being able to cast a ballot is an experience that is both historically significant and very personal for this student-athlete.

James Dowdy, a Senior Economics Major explains why he feels voting is so important as a minority in the Paul Robeson Cultural Center inside of the HUB. #COMMvote2019 11:19 AM

8:48 am PSU Junior Tom Dougherty got an early start in the HUB encouraging his peers to vote in today’s local election. Dougherty is the only student on today’s ballot, and is running for membership on the State College Borough Council. #govote #Commvote2019 #comm481psu #comm481election2019

The morning scene on Election Day.

There are a vast amount of locations in the State College Borough for students and citizens to vote for the local elections! Look online to see your polling place and make your vote count! #comm481psu#commvote2019
Content shot: 10am-10:45am pic.twitter.com/ZHTtpV2XyQ

Navigational aids were iun place as polls opened for early morning voters at the HUB.

9:47am - Vote today! Today is your chance to vote in local elections and students/residents of State College are our and about doing so! The University Park Undergraduate Association at Penn State (UPUA) will be around the Hub-Robeson center from 8am-forward for your questions about voting and any other information. Here, we see them giving some information about where to vote and who you could possibly vote for. #comm481psu #comm481election2019 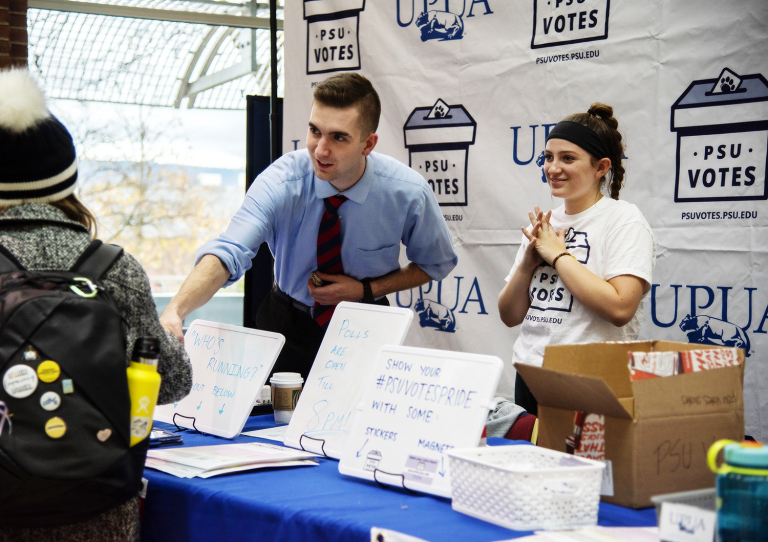 Zachary McKay, a junior economics major, and Kara Doluisio, a freshman in the division of undergraduate studies, talk to students about why it is important to vote in local elections in the HUB-Robeson Center. Photo by Lindsey Toomer 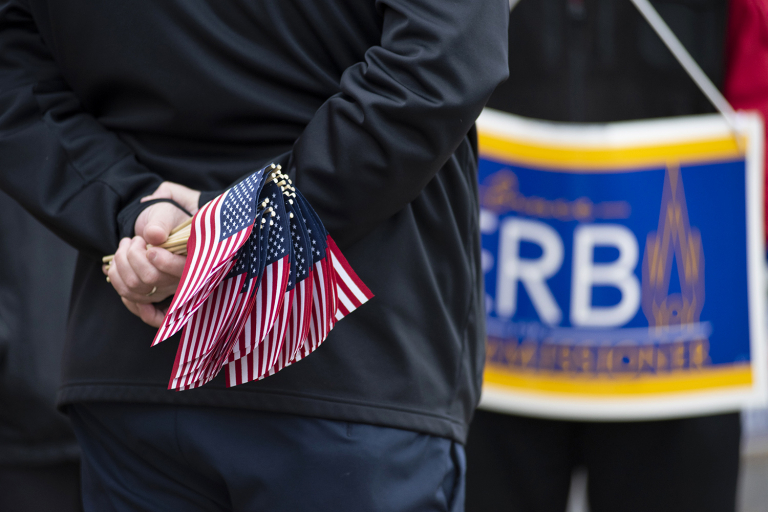 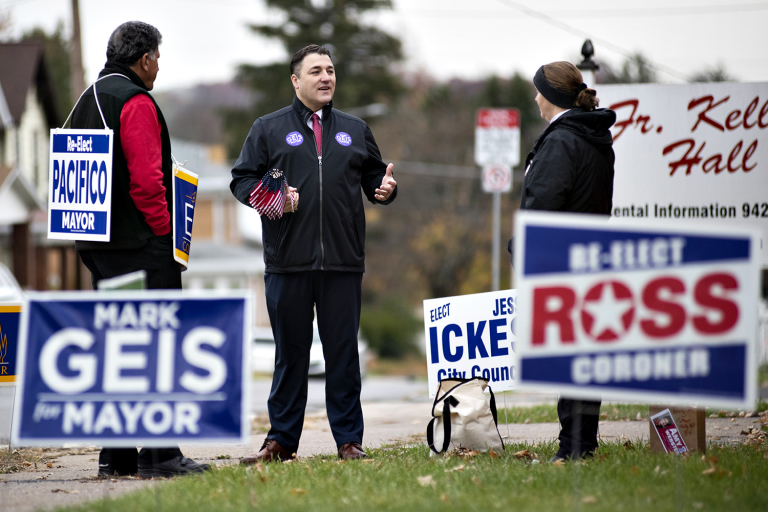 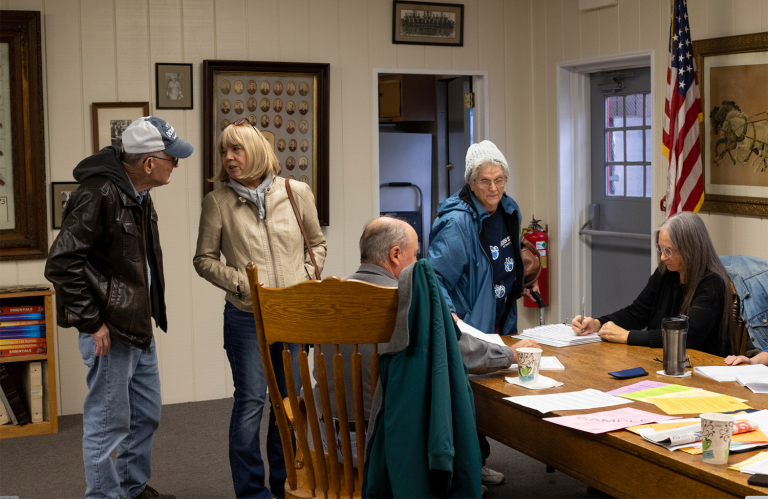 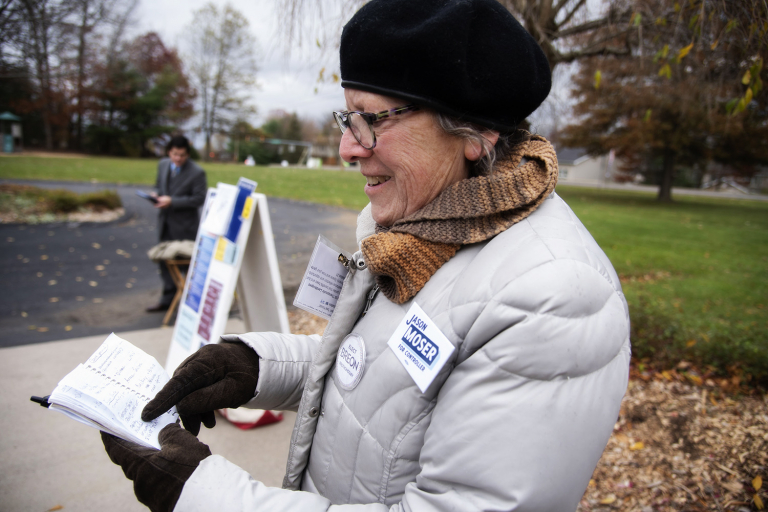 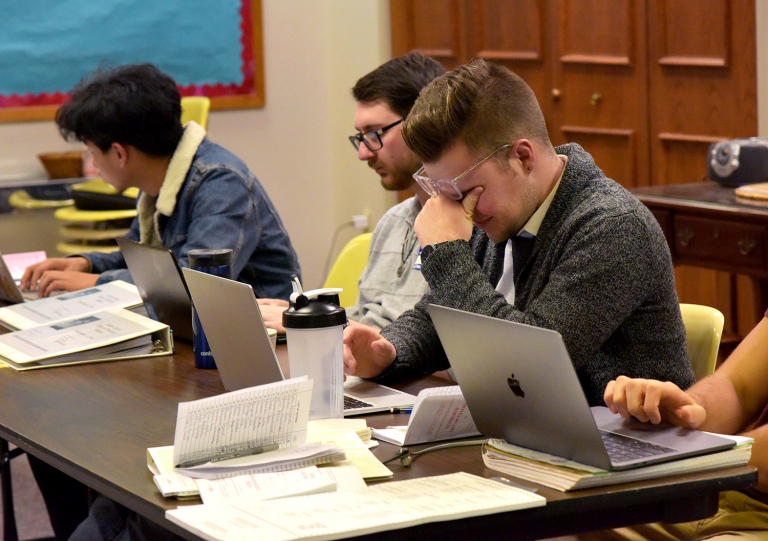 Jordan Emely, judge of elections and a senior at Penn State, pauses while checking in voters at St. Paul’s United Methodist Church in State College. Photo by Lizzie Palma 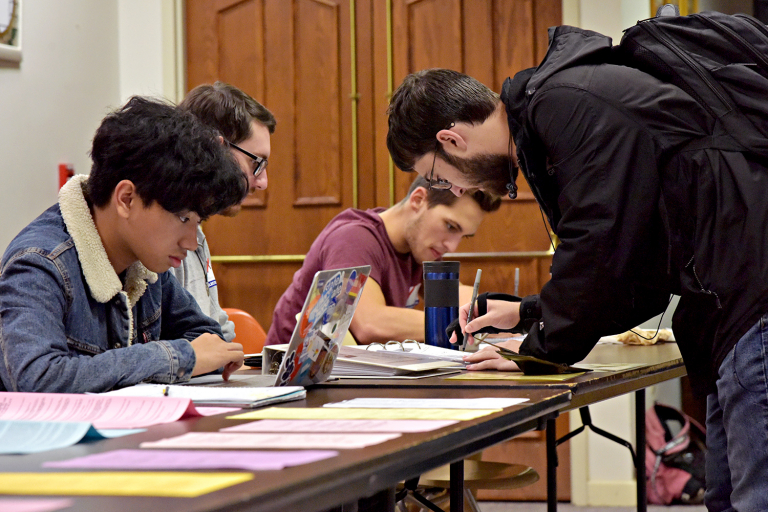 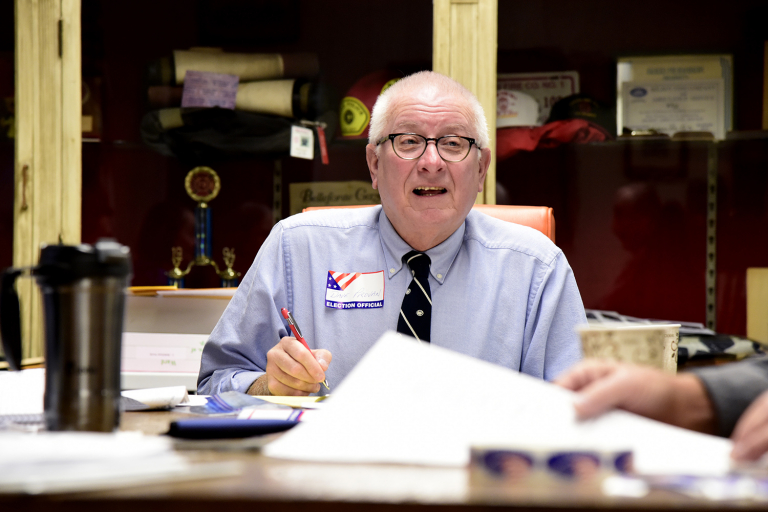 David Provan fills out paperwork as he talks to other election officials in the Logan Fire Co. No. 1  Hall in Bellefonte. Provan serves as the polling location’s Judge of Elections. Photo by Allison Rambler 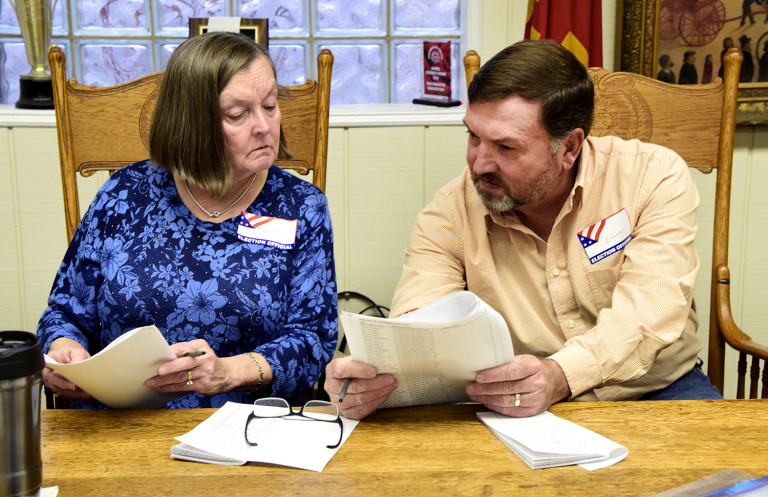 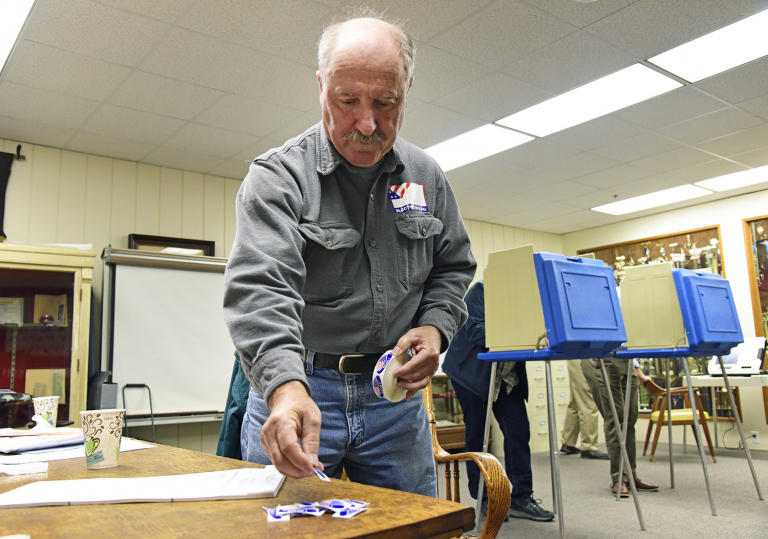 Rick Torsell tears off stickers for voters in Logan Fire Logan Fire Co. No. 1 Hall in Bellefonte. A resident of Bellefonte, Torsell has served as an election official for seven years, and this year held the position of Minority Inspector. Photo by Allison Rambler 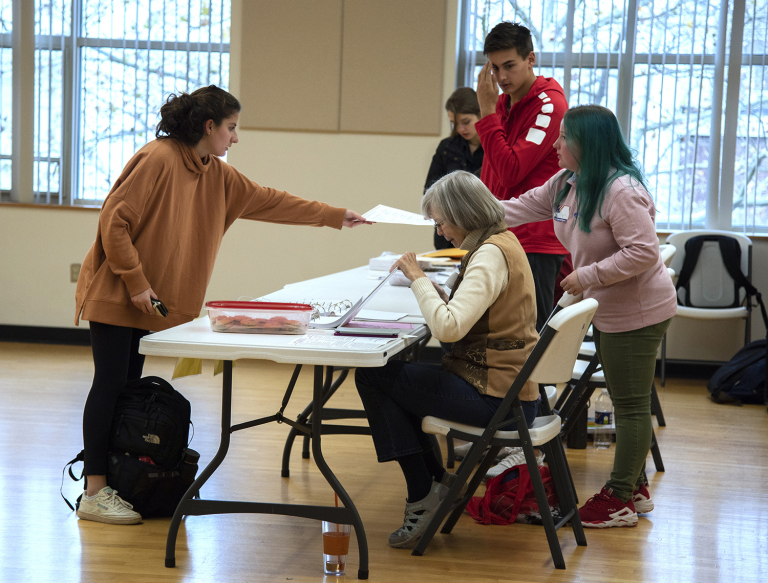 Ariana Rosa is from The Bronx, New York, graduating in Spring 2020. She is a Broadcast Journalism major with a minor in Spanish. During the summer of 2019, Ariana interned at CBS2/WLNY TV, where she gained experience producing live digital newscasts with the CBSN NY team. While there, Ariana acted as the Anchor for the annual summer intern newscast. While at Penn State, Ariana got the opportunity to work as a Staff Writer for Her Campus PSU and Managing Editor, of ¡OYE!: Penn State’s First Bilingual Latinx Newsletter.

Ariana also participated as the Social Media and Webpage Manager for Puerto Rican Student Association, where she contributed to the design and production of the organizations first website. Ariana is an aspiring CEO of a multimedia digital news outlet that gives a voice to the underrepresented Latinx/Black communities. She has always had a passion for story-telling, and believes no voice should go unheard.

Ava Rash is a Senior from Pittsburgh, PA. As an avid sports fan, Ava has taken the steps to further her experience on and off the court. For the past year, Ava has worked for Penn State Intercollegiate Athletics as a marketing intern and is currently an emcee for sporting events including Men’s Hockey, Wrestling, and Women’s Volleyball. Ava has helped with the production and marketing of games, including the Men’s Basketball THON Hoops game, which was the highest attended game in years. Ava is a member of the John Curley Center for Sports Journalism, and hopes to continue her career as a sideline reporter. Ava has previously worked as Penn State’s Homecoming Sideline announcer where she commented and interviewed throughout the live event. Ava also works for the Centre County Report as a reporter and is currently an executive producer.

Nick Mazone is a senior broadcast journalism major at Penn State. He hopes to work at ESPN or FS1 on a sports debate show one day.