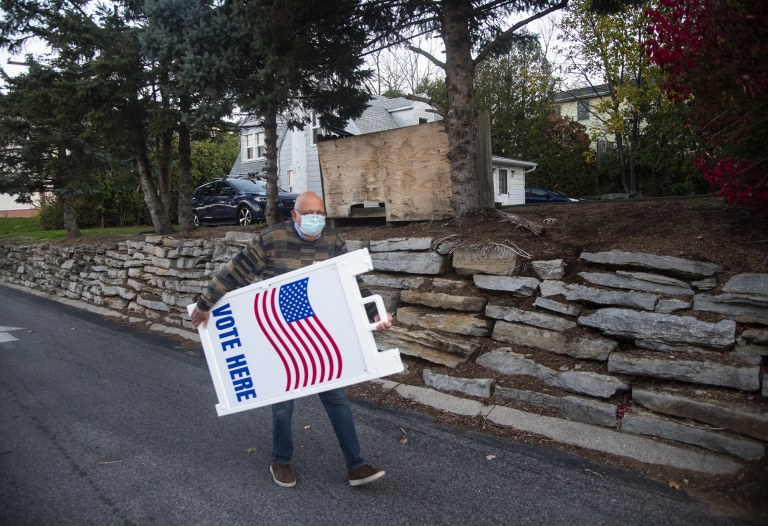 Election volunteer Bob Hendrickson sets up signs before the polls open Election Day morning in State College. "It takes more time than you think to set up everything for the election." Hendrickson said, "People can arrive early. So, we need to have things ready." / Photo by RunKun Yu 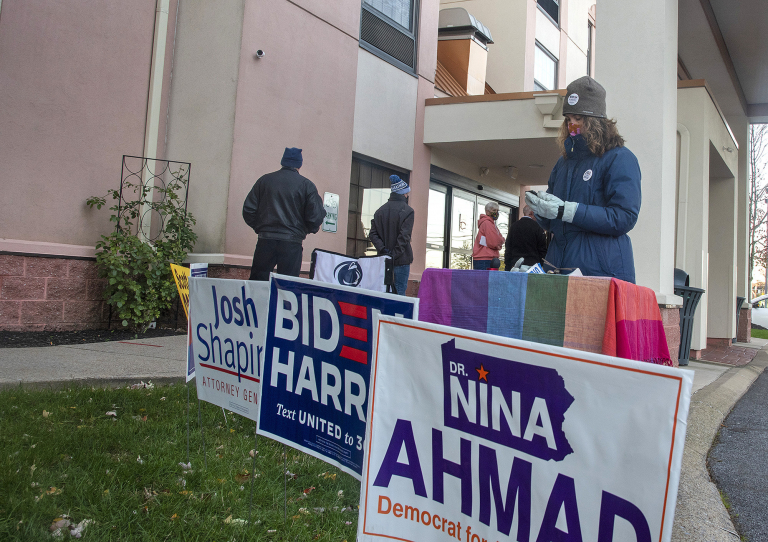 Esther Prins, a Penn State professor from the College of Education, volunteers at the Comfort Suites in State College. "This is how Americans speak,” Prins said. / Photo by RunKun Yu 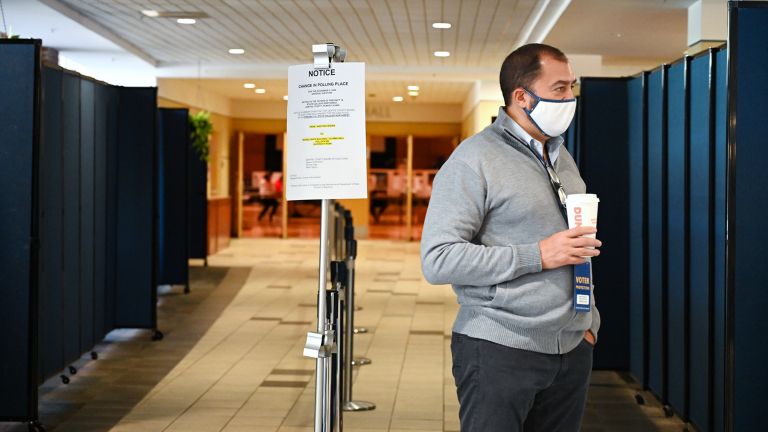 Poll protector Louis Giordano of Brooklyn, NY volunteers in the HUB-Robeson Center to help the State College community vote. “I thought it was important to come out and help, he said, adding, “Brooklyn I didn’t think was as necessary because it’s a very disproportionate vote on one side, obviously.” / Photo by Grace Miller 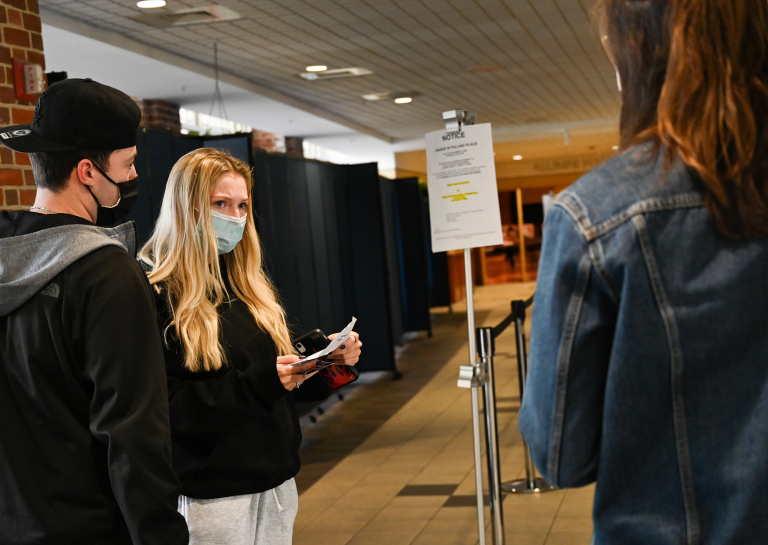 Penn State junior Madison Walters is told by HUB-Robeson Center poll workers that she must vote at the Bryce Jordan Cente. Walters said she is voting in this election because “a lot of human rights are on the line right now.” / Photo by Grace Miller 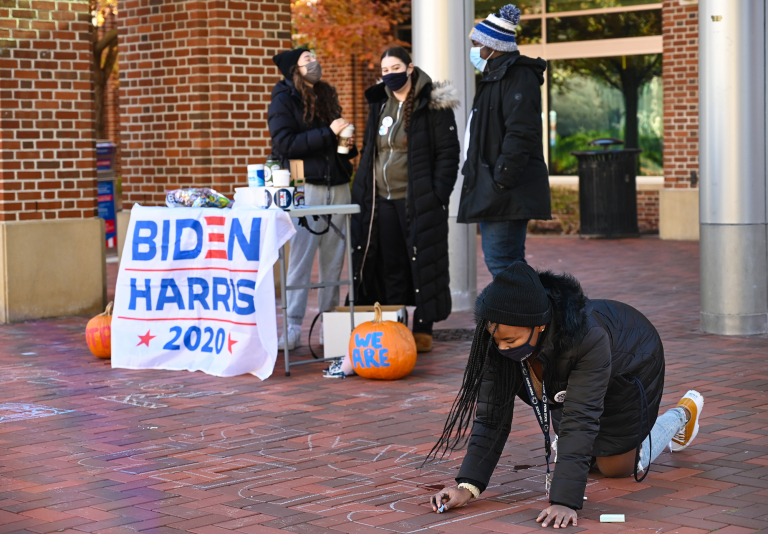 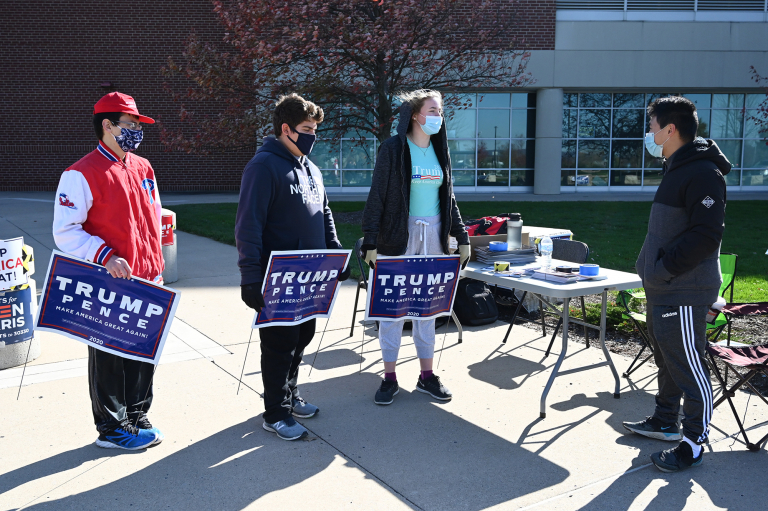 Supporters of President Trump make a final appeal for votes outside the Bryce Jordan Center on the Penn State campus on Election Day. Nick DeLucca, 19, of Pittsburgh, PA, center, said, “He respects the values that this country was built upon,” adding, “The left tears those values down. I don’t find it acceptable.” / Photo by Kit Schroder 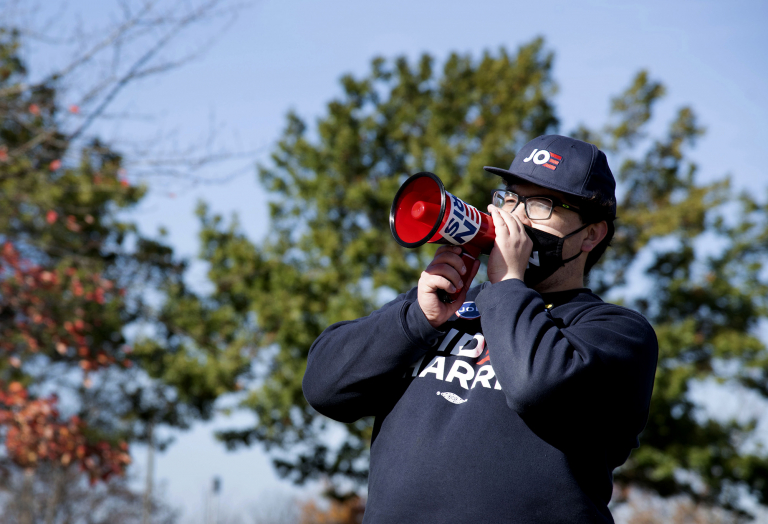 Jacob Klipstein, a Penn State senior majoring in political science, history and Jewish studies, and the president of Penn State’s College Democrats, speaks into a megaphone outside the Bryce Jordan Center on Election Day on Tuesday, Nov. 3, 2020 in University Park, Pa. / Photo by Lily LaRegina 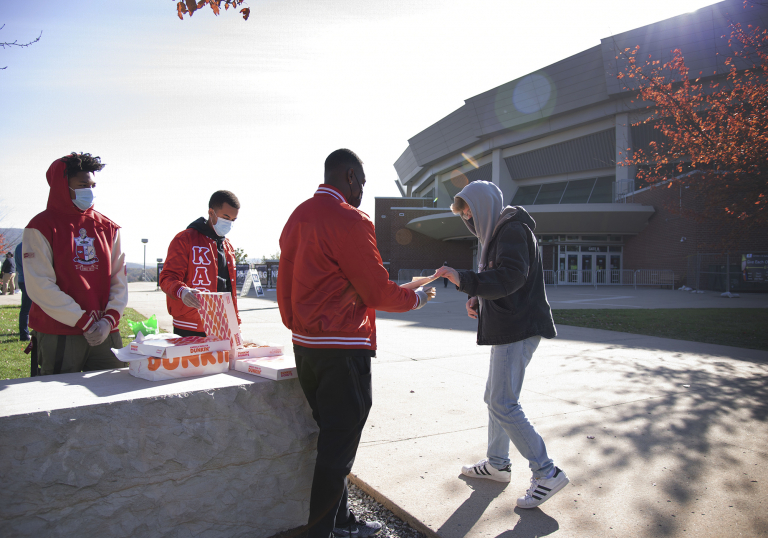 Members of the Kappa Alpha Psi service fraternity at Penn State hand out donuts to voters in front of the Bryce Jordan Center on Election Day on Tuesday, Nov. 3, 2020 in University Park, Pa. / Photo by Lily LaRegina 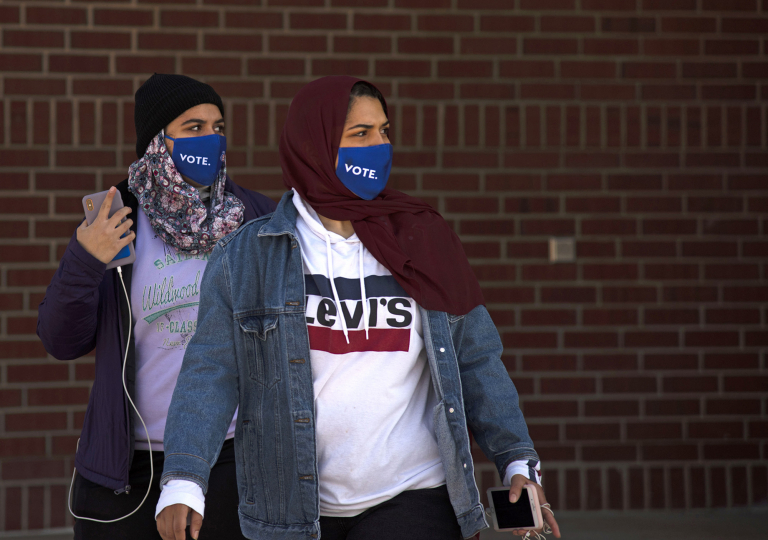 Sisters Reem Abdou , a freshman majoring in astrophysics, left, and Alaa Abdou, a junior majoring in biomedical engineering, leave the Bryce Jordan Center after voting on Election Day on Tuesday, Nov. 3, 2020 in University Park, Pa. “We think if you have the opportunity to vote, always vote, exercise your right,” Alaa says. “Everyone should feel comfortable living in this country, we need a president who will bring everyone together.” / Photo by Lily LaRegina 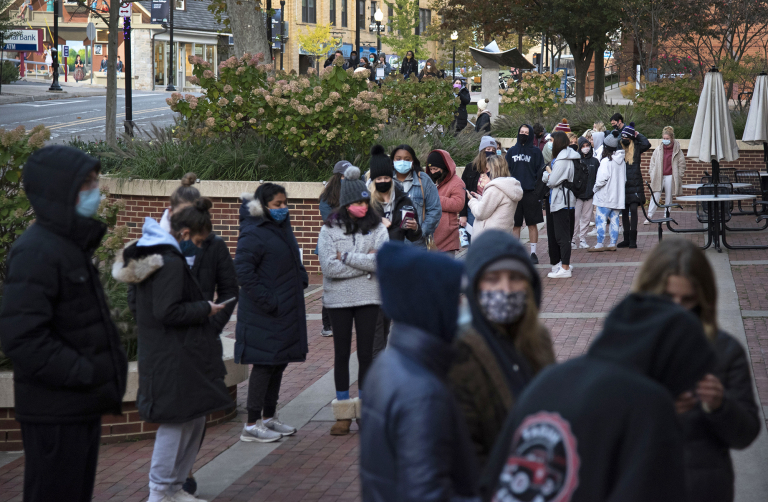 Voters wait in line before the polls open on Election Day at the State College Borough Municipal Building on Tuesday, Nov. 3, 2020 in State College, Pa. / Photo by Lily LaRegina 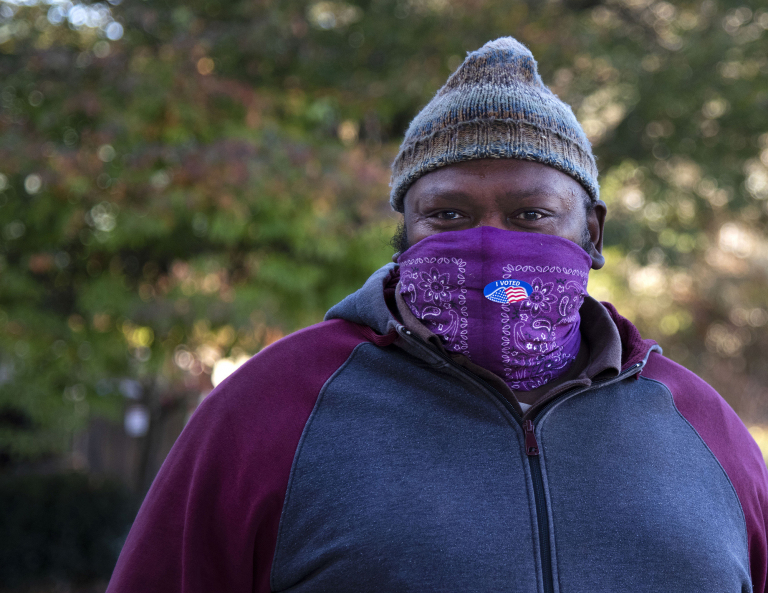 Calvin Jones, of State College, poses for a portrait after voting at Our Lady of Victory Catholic Church on Tuesday, Nov. 3, 2020 in State College, Pa. “I was determined to be in person. It is important and more personal to me.” / Photo by Lily LaRegina 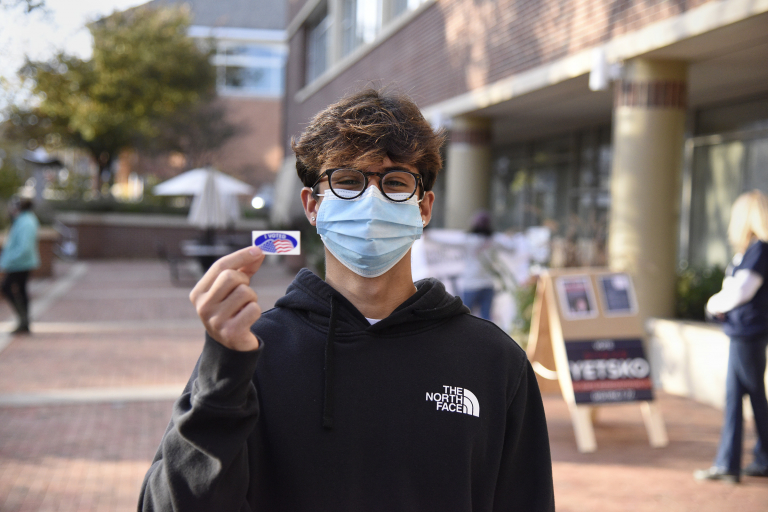 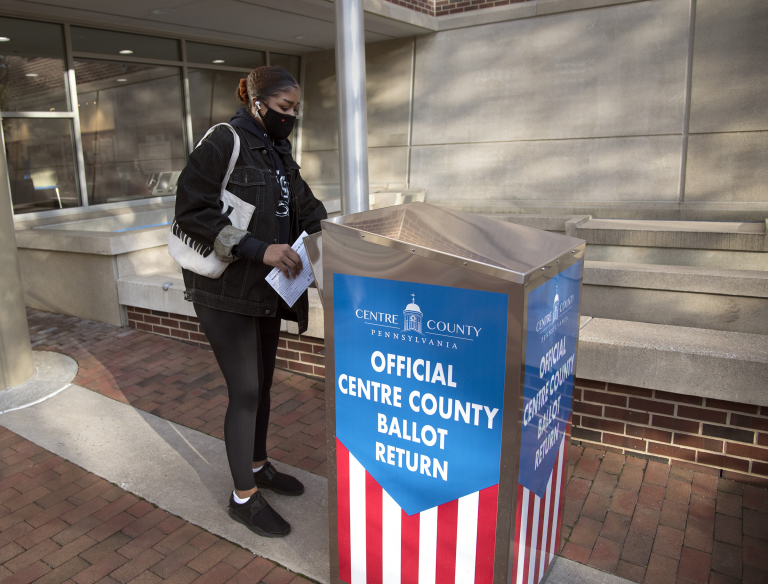 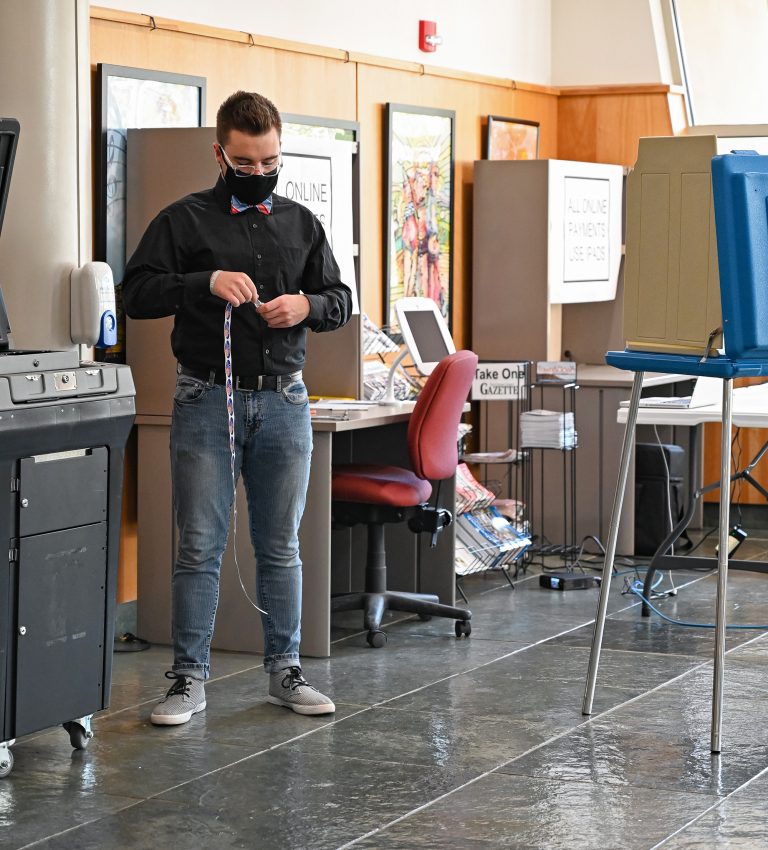 Jordan Emely rolls up voting stickers at the State College Borough Municipal Building. Emely is the judge of elections and a senior at Penn State. / Photo by Hailey Jennings 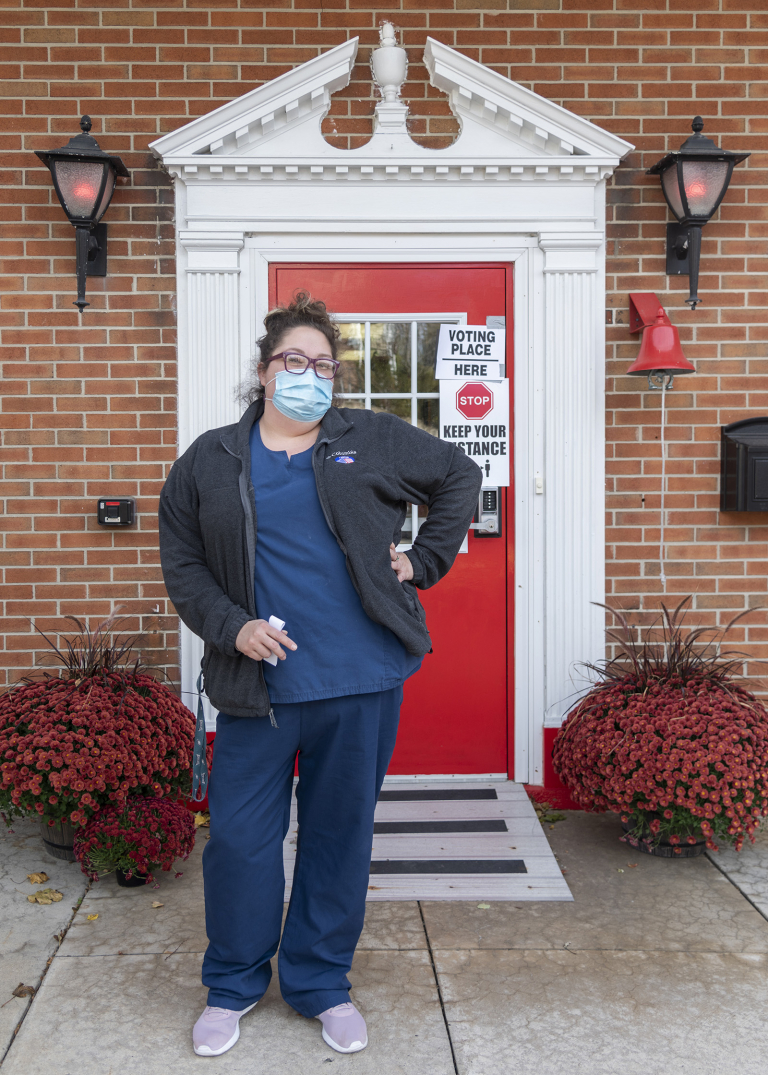 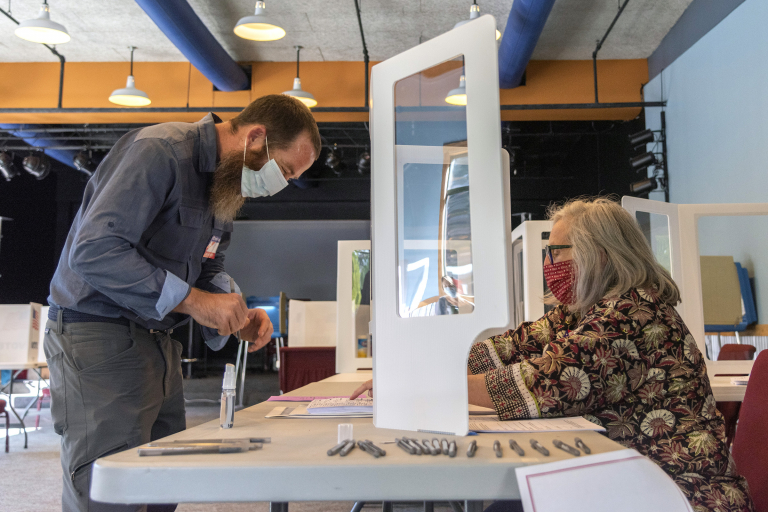 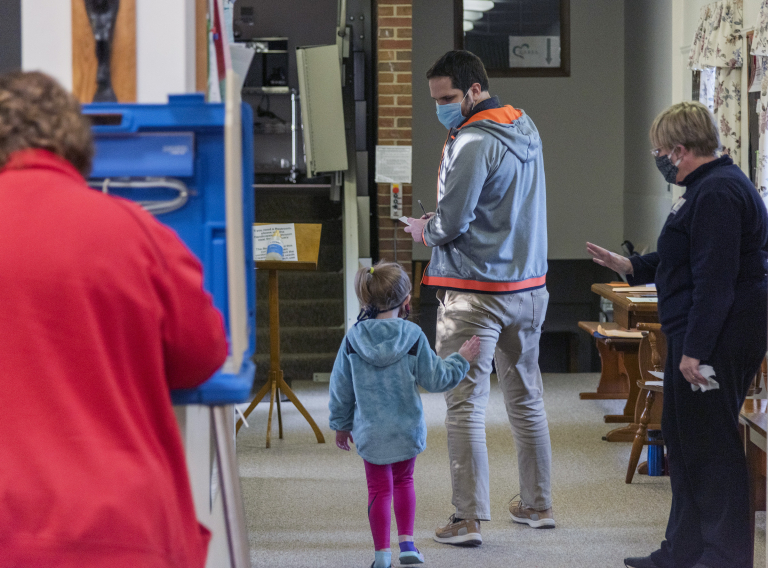 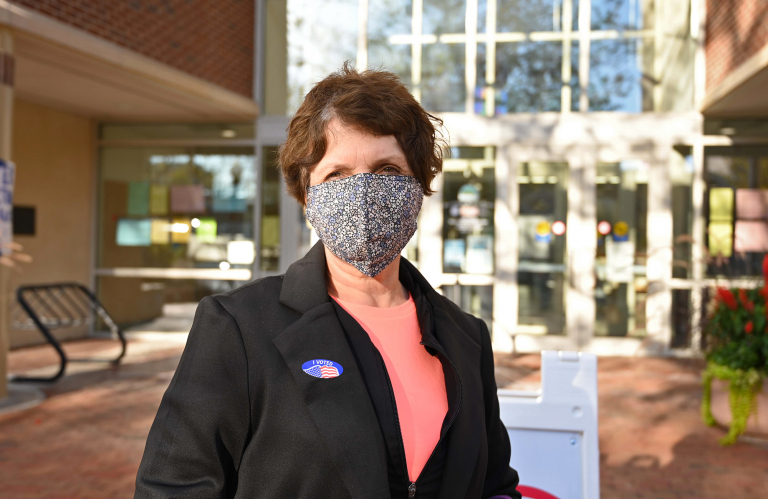 Penn State utility worker Nadezhda Hockenberry after voting at the State College Borough Building on S. Allen St. Hockenberry, who is 56 years old, is originally from Kazakhstan and doesn’t speak much English but expressed her excitement in casting her ballot for this election. / Photo by Melissa Manno 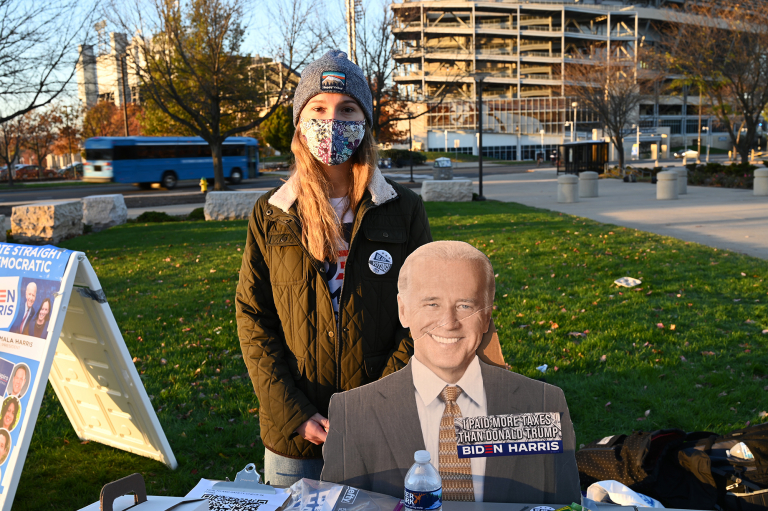 Margeaux Bell, 20, is a junior at Penn State majoring in Architectural Engineering. Bell worked the Biden table outside the Bryce Jordan Center on Election Day, encouraging others to vote. “I messed up my voting registration so I couldn’t vote myself, but I still believe in making a contribution to the election, so I am helping with the table to encourage others to vote.” / Photo by Nikki DeCanio 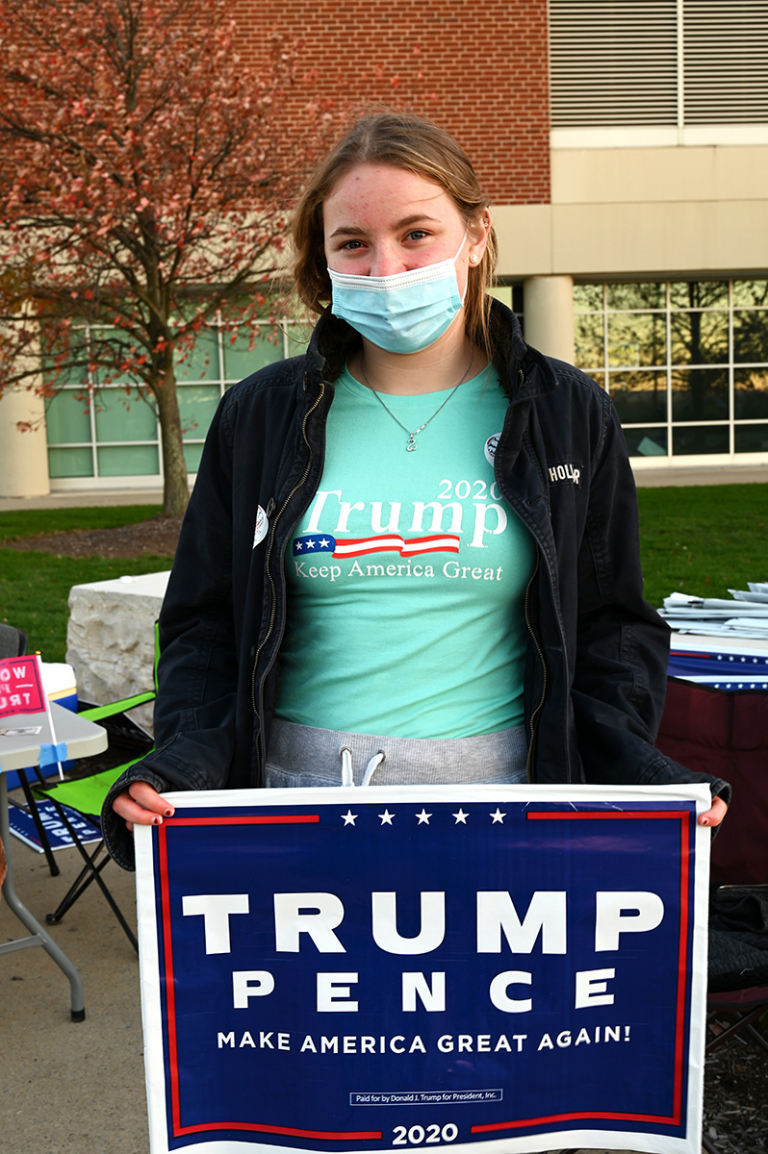 Morgan Watt, 19, is a sophomore at Penn State majoring in Animal Science. Watt worked the Trump table supporting her political views and educating other people about his policies. “The first amendment is very important to me and the university always tries to censor us and our views. That is why I am working this table, I want to fight for a president who fights for speaking the truth even if it is ugly.” / Photo by Nikki DeCanio 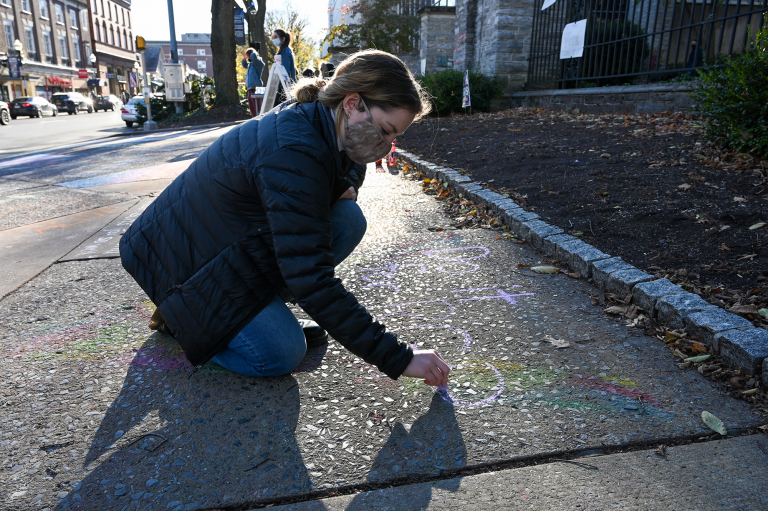 Penn state junior Jamie Arnold writes “Do It for R.B.G” in front of the Allen Street Gates on Election Day. She was volunteering at the table for Students for Joe Biden to encourage people to vote for the Biden-Harris campaign. / Photo by Shelby Lincoln 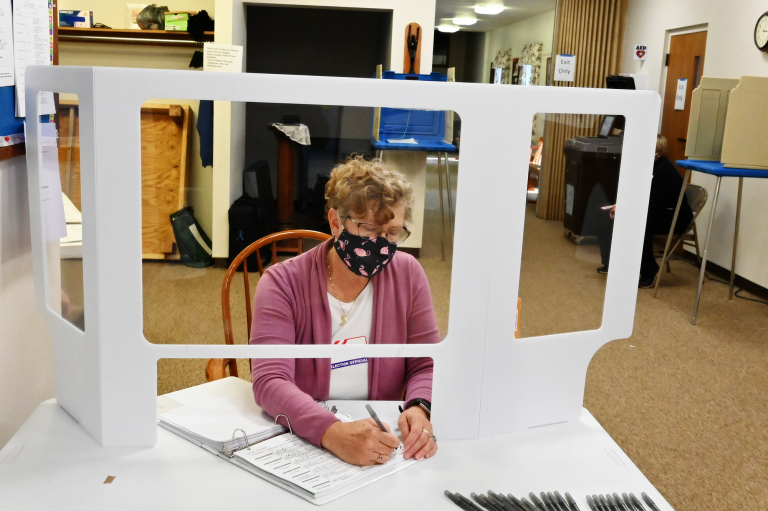 Lisa Grove welcomes voters as she takes their names upon entering to vote at St. John Lutheran Church. / Photo by Terrance McCrystal 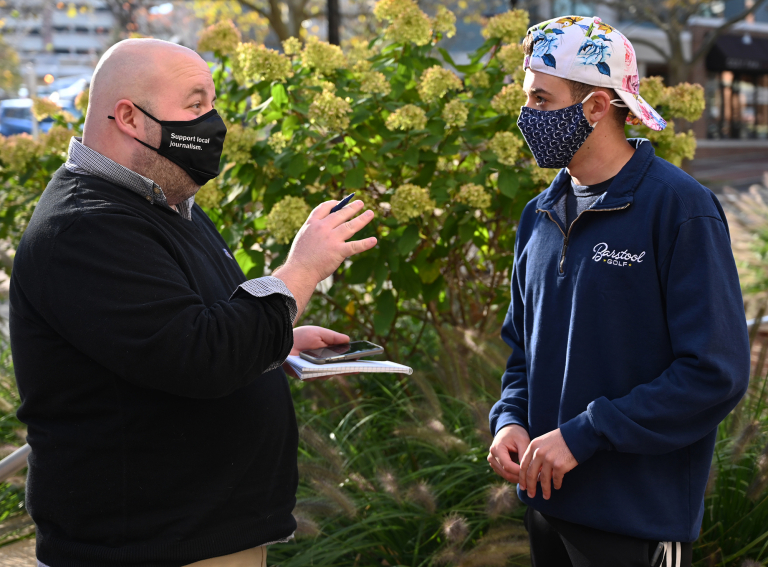 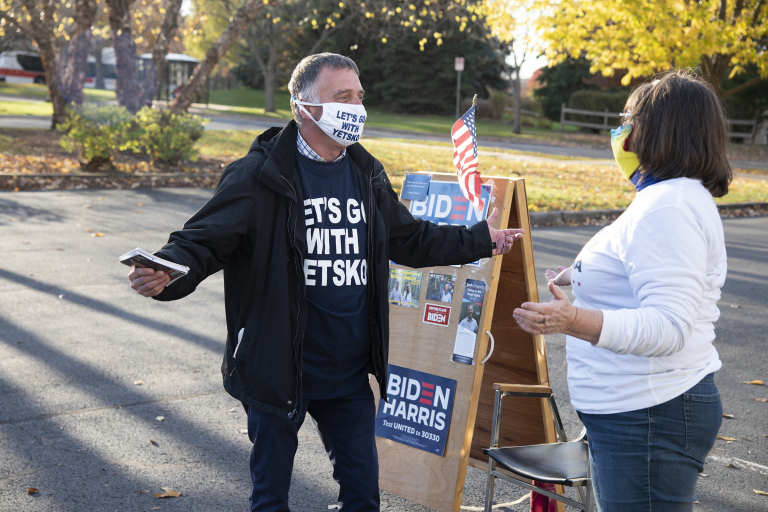 Steve Yetsko, a candidate for Pennsylvania House of Representatives District 77, campaigns outside of the Knights of Columbus polling location in State College, Pa., November 3, 2020. / Photo by Abbi DiTonno. 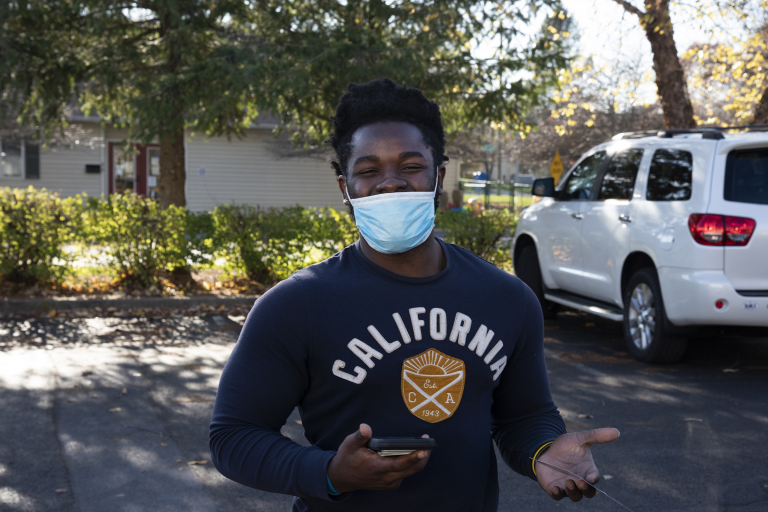 Jordan Green, a Penn State student, waits to vote outside of the Knights of Columbus polling location in State College, Pa., November 3, 2020. / Photo by Abbi DiTonno 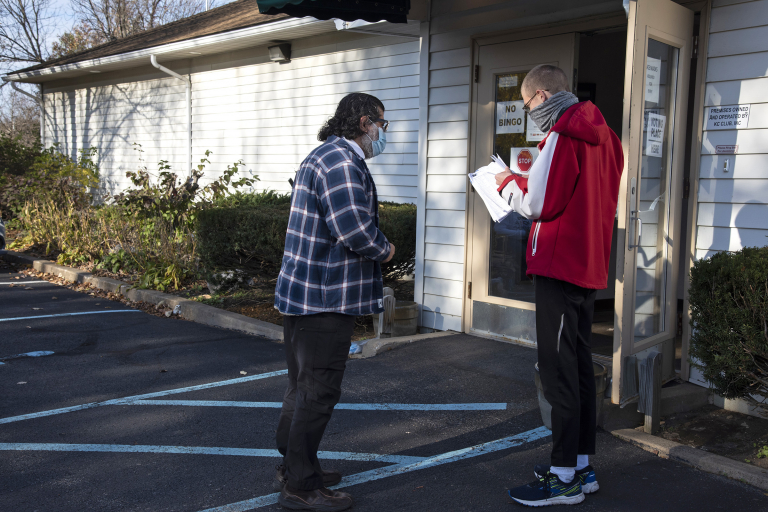 On the right, Daryel Stickles, a Bellefonte High School student working as a volunteer poll worker, helps a voter outside of the Knights of Columbus in State College, Pa., on Election Day, November 3, 2020. / Photo by Abbi DiTonno 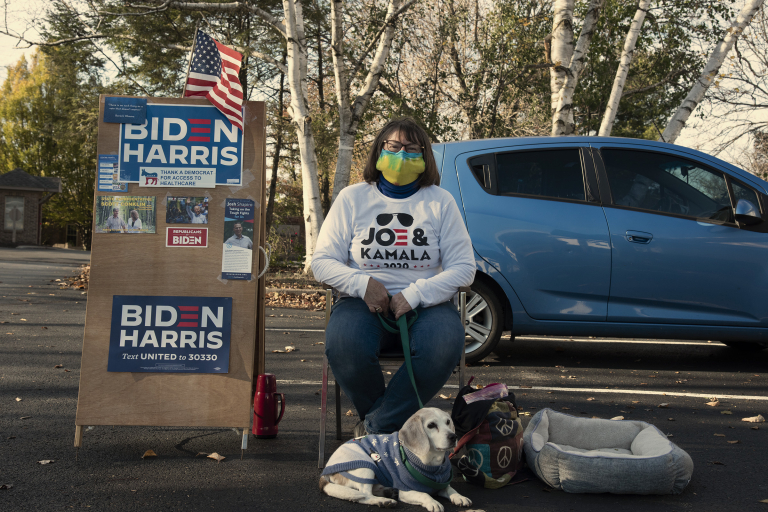 Peg Dobrinska and her dog, Ben, sit outside of the Knights of Columbus polling location in State College, Pa., November 3, 2020. Dobrinska serves on the Centre County Democratic Committee and is a precinct chair. / Photo by Abbi DiTonno 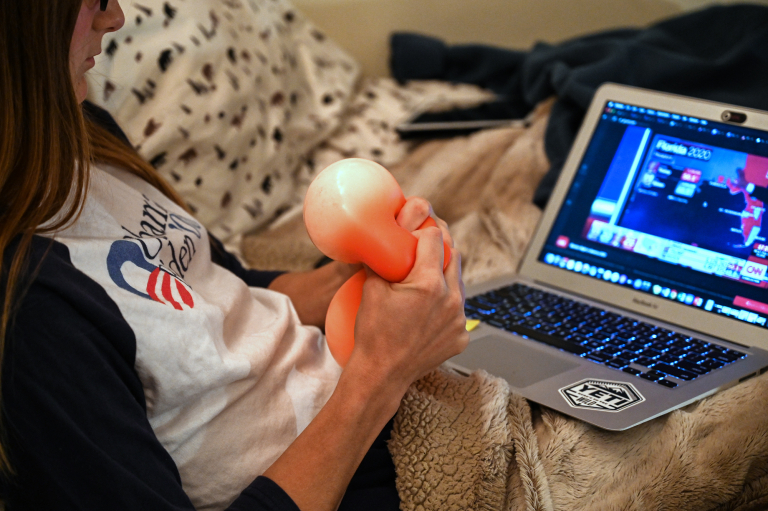 Allyson Minton, 21, of Granby, Colorado, takes out her anxiety on a stress ball as she watches voting results come in on Tuesday. "I can't take four more years of Donald Trump," said Minton. / Photo by Sam Coffey

Incumbent Keller and Democratic Challenger on Ballot for House