Election night 2018 in voices and pictures

Story posted November 6, 2018 in News by Belisario College of Communications 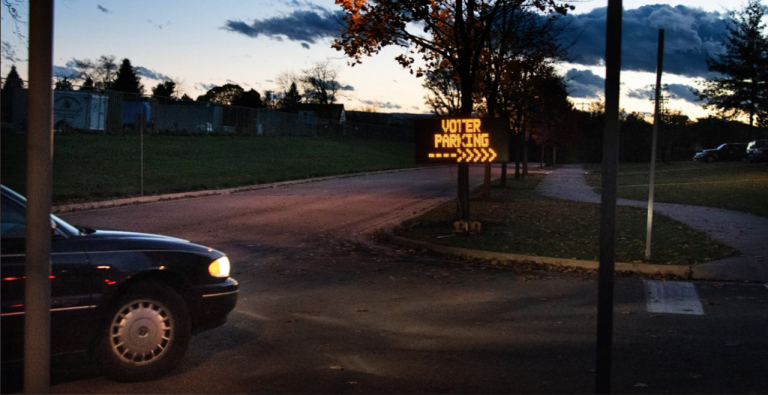 Voters were still arriving to cast their ballots across Centre County as the sun set Tuesday. Photo by Morgan Campbell


Voting precincts across Centre County reported heavy turnout today as area residents ventured forth to choose a governor, a senator  and other state and local officials.

On this busy election day, people involved in the process paused to reflect on their experiences with reporters from the Donald P. Bellisario College of Communications. One candidate said the number of voters took his breath away. An election judge said he knows every vote counts from personal experience. He elected himself to the position he holds today by writing in his name on a ballot cast in 2017.

Here are the voices and images of Election Day 2018. (View more multimedia coverage, including 360-degree video at Election*Day.


3:30 p.m. | This candidate says record turnout takes his breath away

Congressional candidate, Marc Friedenberg, steps out from the polls to tell us how the election is going so far #comm481psu #comm481election2018 Time Stamp: 3:30PM

Afternoon | No line where she cast her ballot

Sarah Adsit at her favorite polling station. Sarah votes absentie, not only because its more convenient for her schedule but, so she can stay connected to her home community. #comm481election2018

Alison Kuznitz, a senior and journalism major who's passionate about voting, laments missing her chance to vote today. It's okay Alison... it happens to the best of us! #COMM481election2018 pic.twitter.com/o0OX9ffJT7

Afternoon | Meanwhile, back at campaign headquarters ...

How Claire and Team Marc Friedenberg are participating in this years Election process. #comm481election2018 Time: 5:51pm

Sebastian Carmine is a Junior at Penn State and just got done voting at the Student Center. Carmine is Former Active Duty Marine and wants the elected officials to make sure his fellow brothers and sisters are taking care of when they return home. #Comm481Election2018 TS 12:22

A post shared by TW Multimedia PSU (@twmultimedia) on

Jason Marcus is a Senior at Penn State who just got done voting at the Student Center. Marcus understands the importance of young people voting, especially in this years mid terms. TS 12:14pm #Comm481Election2018

A post shared by TW Multimedia PSU (@twmultimedia) on

Brian "Duke" Dougherty is a senior studying supply chain management here at Penn State. Dougherty believes that voting is more than a choice, but a constitutional right and that everyone should take advantage of this opportunity to have their voice heard. (11:00 a.m.) #Comm481election2018

Maya Rollberg is an exchange student from Germany studying political science at Penn State. While interning at Next Gen America, Maya's mission is to try and increase the youth vote turnout by informing students when and where they can cast their ballots. #Comm481Election2018 pic.twitter.com/p5LJymc2xg

9 a.m. | His vote definitely made a difference

Alex Zhao, Inspector of Elections, shares why voting is important and what it means to him! #comm481election2018

A post shared by Kaylee Corl Media (@kayleecorlmediaspace) on

If you’re in the Ferguson Township area today, stop by Mike’s Video, TV & Appliance and exercise your right to vote!!! #comm481election2018 #govote #election2018

A post shared by Kaylee Corl Media (@kayleecorlmediaspace) on

Voting Between the Washers