A man collects incense in Man Mo Temple, located in Sheung Wan on Hong Kong Island. Man Mo Temple is a Cantonese transliteration of Wen Wu temple, a temple for the worship of the civil or literature god Man Tai / Man Cheong and the martial god Mo Tai / Kwan Tai. Due to its history as a British colony, Hong Kong has a wide range of religions — from Christianity to Islam to Buddhism. Photo by Lucie Couillard

HONG KONG — Every day the Khalsa Diwan Sikh Temple in the Wan Chai district of Hong Kong sets out metal bowls full of vegetarian Indian food and invites anyone who is hungry to stop by and share a meal – free of charge.

The practice is known as Langar, a more than 600-year-old institution of the Sikh religion intended to uphold the principle of equality and the ethics of sharing.

“Langar is not only to feed the hungry and needy, but it promotes the equality of all people,” said Gurmel Singh, who’s the manager and religion teacher at the temple

Of the approximately 2,000 people who share langar at the temple each week, about 400 are needy, Singh said. The cost to the temple is about $5,160 a week, money which comes from financial or in-kind contributions from members of the temple.

The Langar at Khalsa Diwan Sikh Temple is but one example of how religious organizations in Hong Kong offer social services to those in need in a city of more than 7.3 million people.

All over Hong Kong, religious organizations of every kind perform similar services every day – providing social, medical and educational services – often in place of, or at the behest of, the government.

The strict separation of church and state that is so pronounced in the United States is nonexistent in Hong Kong. 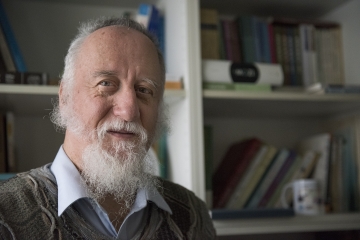 Lauren Pfister, professor of religion and philosophy at Hong Kong Baptist University, says the government of Hong Kong has a longstanding relationship with religious organizations to provide social, medical and educational services. Photo by Sarah Rafacz

“Hong Kong received and developed a form of governance and law that had a richer and more interactive relationship between the government and religious communities,” said Lauren Pfister,  professor of religion and philosophy at Hong Kong Baptist University.

As a consequence of having been under British colonial rule for more than 150 years, the government of Hong Kong — now a special administrative region of China  — has had a longstanding relationship with religious organizations to provide social, medical and educational services to Hong Kong people, Pfister said.

“Religious people thrive here. There’s an identity, and they’re very much involved not just with their own communities, but also with much larger ranges,” Pfister said.

The government’s eagerness to partner with religious organizations may be as much a result of practicality as principle. After World War II, the Hong Kong government needed to rely on churches to provide social services because of a refugee crisis. Between 1945 and 1951, hundreds of thousands fled from the mainland to British Hong Kong rather live under Communist Party rule in the People’s Republic of China. 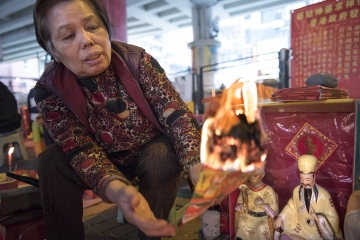 Working under an overpass in Causeway Bay on Hong Kong Island, Yuen-siu Chiu, known as Miss Chiu, charges the equivalent of US$ 6.50 to put a blessing or curse on someone. Miss Chiu has been doing this for about 30 years total — 10 in Hong Kong and the rest in China. Photo by Lucie Couillard

In Hong Kong, there were plenty of religious groups ready to help. Due to its history as a British colony, Hong Kong has a wide range of religions — everything from Catholicism to Protestantism to Islam to Buddhism to women who set up shop underneath an overpass and offer to curse — or bless — people for a nearly $6.50 fee.

“We see it as ... a joy to be able to provide some service to [the] wider community,” said Reverend Matthias Der, dean of St. John’s Cathedral.

The Anglican cathedral, which is on Hong Kong Island in Central, where the financial district is located, operates an extensive system of social services without funding from the government.

Among them is Helpers for Domestic Helpers, which was founded in 1989 by volunteer lawyers at the cathedral. Domestic helpers would approach those lawyers asking for legal advice, so the cathedral began a ministry to provide them with help when they run into issues, Der said.

About 60 percent of the congregation of 2,200 people is made up of domestic workers, he said.

Hong Kong has more than 320,000 domestic workers, who come to Hong Kong from other Asian countries to make money to send home to their families.

Over the years, Helpers for Domestic Helpers has aided more than 25,000 people, many of whom came from Holly Allan’s native country of the Philippines and were unfamiliar with Hong Kong laws and practices.

“They’re vulnerable to abuse,” she said.

Helpers for Domestic Helpers can explain clients’ rights to them, help clients recover personal property taken from them unlawfully, help them prepare for court, write letters to employers and work with government agencies pertaining to their clients’ cases, among other services, according to its website.

Helpers for Domestic Helpers sees about 2,000 new clients each year in addition to existing cases, so it typically has about 3,000 cases per year.

St. John’s has other outreach programs, including the HIV Education Centre founded to help alleviate the stigma of HIV and spread awareness about how the virus is transmitted; a professional counseling center with 27 counselors licensed and trained in everything from marital problems to stress to abuse; and Cast Away, a second-hand store from which about 75 percent of the profits go to about 40 local charities. In collaboration with several other churches, St. John’s operates the Mission for Migrant Workers,  a place of guidance and fellowship, Der said.

“In the [United States], … there would be legal debates if some particular organization received ‘special treatment.’ In Hong Kong, this is not considered to be ‘special treatment,’ but is a matter of the civil role taken up in general society by religious communities within Hong Kong,” Lauren Pfister, the Hong Kong Baptist University professor, said.

Pfister describes Hong Kong as being in a “post-secular age,” meaning that there’s a recognition of a multiform of religious traditions with different worldviews that can still work together to lobby politically.

About 25 percent of the population is categorized under Chinese religious practices, 8 percent are Buddhist, 5 to 6 percent are Roman Catholic and about 5 to 7 percent are Protestants, though this list is not exhaustive, Pfister said.

All social work organizations are treated based on their institutional mission and how consistent they are in that mission in their practices, irrespective of their religious affiliation, Pfister said.

According to Article 141 of Hong Kong’s Basic Law, “religious organizations shall, in accordance with law, enjoy the rights to acquire, use, dispose of and inherit property and the right to receive financial assistance. Their previous rights and interests shall be maintained and protected” and “religious organizations may, according to their previous practice, continue to run seminaries and other schools, hospitals and welfare institutions and to provide other social services.”

Caritas Hong Kong, a charitable organization of the Catholic Church, was established in 1953. It was one of those formed in response to the problems that arose in Hong Kong following World War II.

Caritas offers many services for the people of Hong Kong, including social, family, youth, education and medical services, said Dominic Chan, chairman of the board of management of Caritas Hong Kong and parish priest at the Hong Kong Catholic Cathedral of the Immaculate Conception.

Caritas Hong Kong is one of the largest nongovernmental organizations in Hong Kong, he said.

According to its website, Caritas Hong Kong has an annual expenditure of nearly $194 million.

While about 20 percent of the funding for Caritas comes from donors, about 80 percent of Caritas is subsidized by the government, Chan said.

With that financial support, Caritas is able to help around 200,000 people per year in Hong Kong, he said.

“We have a good relationship [with the government],” he said.

Schools run by religious organizations in Hong Kong have the opportunity to receive funding from the government, too.

Hong Kong has quite a mixture of educational organizations, Pfister said, with a notable number of them being directly related to specific religious traditions and their organizations and many of them receiving government funding. 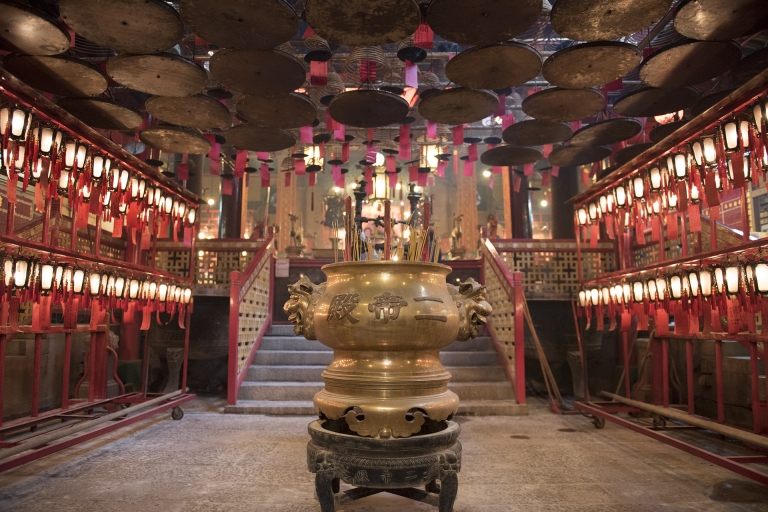 Interior of the Man Mo Temple, a temple for the worship of the civil or literature god Man Tai / Man Cheong and the martial god Mo Tai / Kwan Tai. It is an example of the wire variety of religions that find a home in Hong Kong. Photo by Lucie Couillard
Tweet

Graduated May 2015 / Print Journalism and English

In her senior year at Penn State Sarah edited The Daily Collegian’s weekly magazine P.S. Previously at The Daily Collegian, she worked as the campus chief, long-form/special projects editor, an environment/research reporter and an education reporter. She also interned at State College magazine during her junior year. In March, she traveled to Hong Kong as part of the Penn State International Reporting class. Last spring, she studied at the University of Westminster in London.