Story/Video posted May 3, 2019 in News, CommMedia in Puerto Rico by Tina Locurto 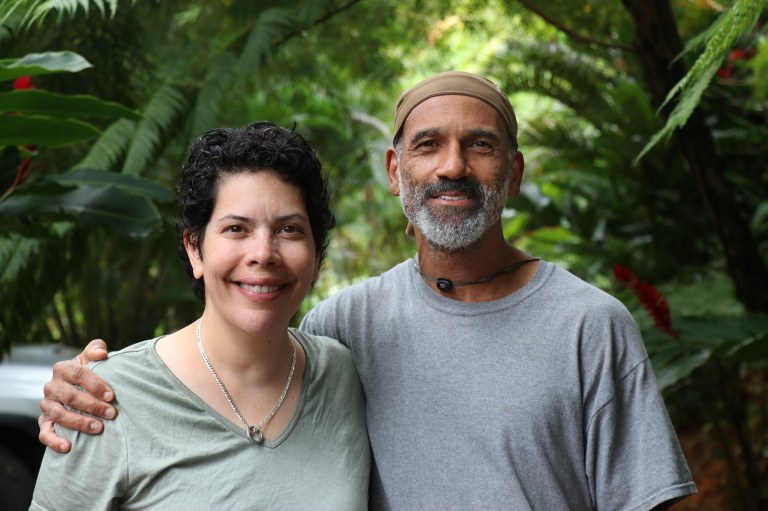 When Sarah and Paul Ratliff uprooted their lives in California to farm in the misty mountains of Utuado, Puerto Rico, the couple knew only five words of Spanish between them.

Despite the uncertainties — Sarah called the decision “impulsive” from start to finish — the Ratliffs now consider Puerto Rico their home.

“It was time to do something really different, and so we thought/decided in the last half of our lives we might as well do something that feels meaningful to us, and so, here we are,” Sarah Ratliff said, smiling from her veranda that overlooks a lush, green mountainscape.

Utuado, located just a smidge to the west of the center of the island, is surrounded by high mountains and the Lago Dos Bocas reservoir. Though the Ratliffs live only six miles from the town center, it takes a half hour to get there.

The winding, narrow road carved into the mountainside passes colorful Mediterranean-style houses, and, on the last leg of the trip, a yard full of peacocks. 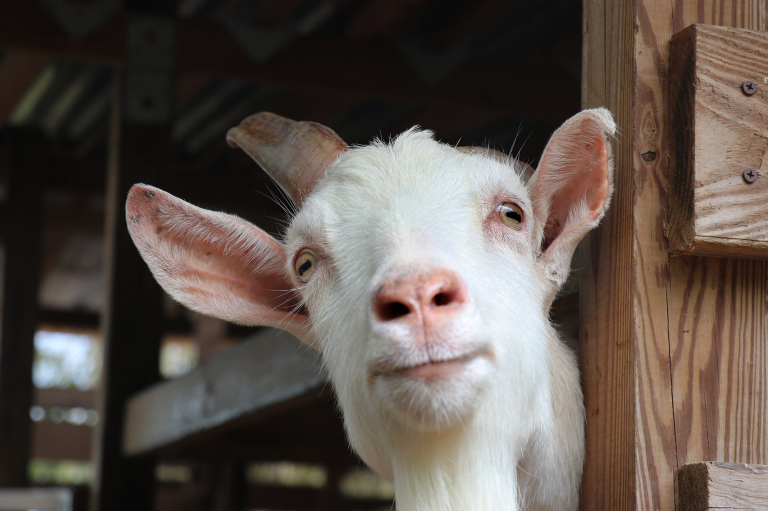 Goats are raised for dairy and fertilizer at Mayani Farms. Photo by Tina Locurto


Living on the island for 11 years, the Ratliffs have not only developed their own sense of identity as Puerto Ricans, but also as sustainable farmers.

While Sarah works as a freelance writer, Paul has turned their five acres of mountainside farmland into a reliable food source for themselves and their farm animals, growing tropical fruit bushes and tall, swaying palms.

Their years of clearing land, planting seeds and tilling the soil would all be undone when Hurricane Maria roared across the island in September 2017.

Sarah and Paul, while keeping their animals calm, did their best to also stay composed as frightful winds rattled their windows and doors.

“You can peek out through little cracks in the window and see the ferocity of the storm, but you don’t know what’s going to happen,” Paul said. “Not only for the farm itself, the animals … but for your own well-being.”


Sarah Ratliff said she and her husband were always square pegs in round holes. 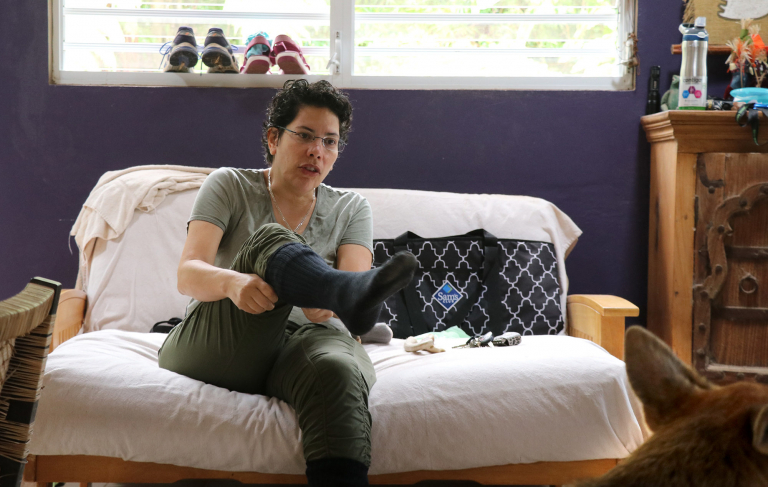 
While Paul graduated from the University of the District of Columbia with a degree in engineering, Sarah went into the marketing field.

The pair, who worked at the biopharmaceutical company, Amgen, for years felt as if they were “doing the drudgery of corporate America,” as Sarah put it.

Though Paul originally wanted to pursue agriculture and become a forest ranger, pressure from the adults in his life led him down the engineering path.

“Indeed, it’s lucrative, but ultimately it was unfulfilling, because I wanted to be outdoors,” he said. 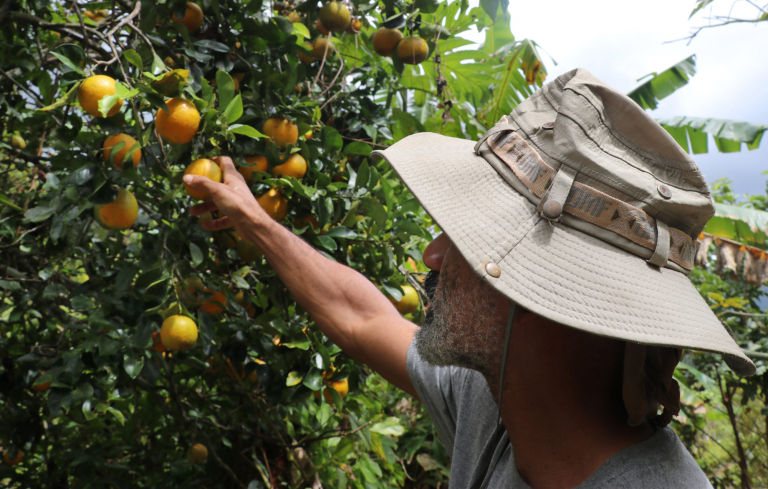 Paul Ratliff says he prefers working in an orchard to cubicle life. Photo by Tina Locurto


At a Breast Cancer Walk in San Diego in 2007, Paul told Sarah he no longer wanted to do “this life” anymore. He wanted to be a farmer, and leave the world a better place than he found it.

In just a few months, the couple sold their house, packed their belongings and made the long journey to the mountain neighborhood of Don Alonso in Utuado.

In about a year, they established Mayani Farms, and Paul’s dream of working in agriculture was achieved.

Focusing on sustainability and organic living, the Ratliffs do not sell any of the produce they raise. Instead, they use much of the goat milk, cheese and eggs for themselves, and share with neighbors and friends.

The Ratliffs share their living space with furry and feathered friends. Video by Tina Locurto


Alongside Sarah and Paul, 11 cats, three dogs, one bird, seven goats and pigs, one buck and too many chickens and ducks to count have also taken up residence at the Ratliffs’ Spanish terracotta-style home.

A chorus of squawks, bleats and squeals echo across the property.

From the moment the couple arrived, friendly faces, warm greetings and a strong community caused the Ratliffs to feel as if they were traveling for 40 years before finally coming home.

“That’s something we missed when we were in California,” Paul said. “Neighbors are busy, they drive home, push the button, go in their garage and then they disappear. We didn’t want to live the rest of our lives like that.”

The Ratliffs ponder issues of assimilation and identity. Video by Tina Locurto

To Sarah, self-identity is an important part of her decision to move to Puerto Rico. 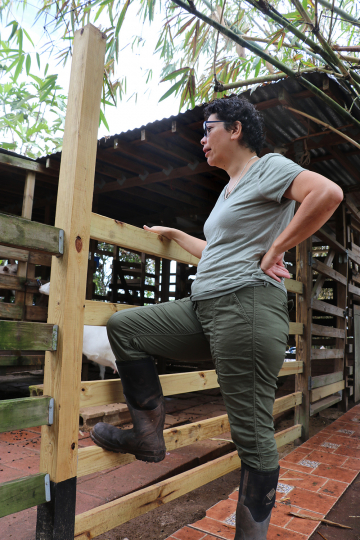 Sarah Ratliff checks on livestock at the farm. Photo by Tina Locurto

As a multiracial woman, she tried to identify with all of her races, African American, Japanese and White, but it felt “disingenuous.”

“I weave in and out of self-identity depending on the situation,” she said. “There’s also the experience I have of being very ambiguous-looking and people assuming I am Puerto Rican, Persian, from the Philippines or some other place that’s not me.”

Experiencing the same struggles and fighting the same battles as her friends and neighbors during Hurricane Maria helped Sarah discover her true identity.

“I really started identifying with Puerto Ricans in a way I hadn’t before,” she said. “I’ve always felt assimilated into Puerto Rico, but after the hurricane … I really felt less American, I felt less multiracial — I felt Puerto Rican.”

Like Sarah, many Puerto Ricans share an identity from several races — African, Spanish and Taino. She meets people from the island who assume she’s Puerto Rican, which is fine with her.

“I see no reason to correct people because maybe it’s just not that important to me anymore. And it’s got nothing to do with trying to be someone I’m not,” Sarah wrote in an article for Multiracial Media. “It’s about being able to live someplace where I’m seen as an equal, and isn’t that what all [people of color] strive for?”

Of the five acres of farmland the Ratliffs cultivate, about 80 percent of their trees were blown away by Hurricane Maria.

As the winds started up, the Ratliffs knew their lives would change — though they were not certain how.

The first half of Hurricane Maria did little damage. After the eye of the storm passed over, however, the second half caused all the devastation.

“The sound is something I’ll never forget. It’s not something I can necessarily describe, but it’s harrowing,” Sarah said. “It sounds like the meanest, baddest expletive you can imagine — and its sole purpose is to knock down your door.”

Their house was not damaged, thanks to years spent hurricane-proofing. Their farm did not fare as well.

After the wind and rain died down, Paul said his crops were the last thing on his mind. His and Sarah’s own survival, as well as helping neighbors and friends was most important.

It took the Ratliffs 10 days to clean their driveway after Hurricane Maria.

They didn’t have electricity for nine months.

The six-month cleanup they expected turned into a year and a half, with work still in progress.

On a warm, showery afternoon, Paul takes visitors on a tour of the farm. As he climbs the muddy hills that link each crop and tree, he passes several plants supported by metal beams and rope — an effort to save the few trees that have a chance at recovery.

He and Sarah said it’s “demoralizing” to lose everything they had worked years to achieve.

“You can’t recreate eight years of work in a couple of months,” Paul said. “It’s just not possible.”

Despite the initial depression and fear for how their farm would recover, Paul said those feelings are now gone. 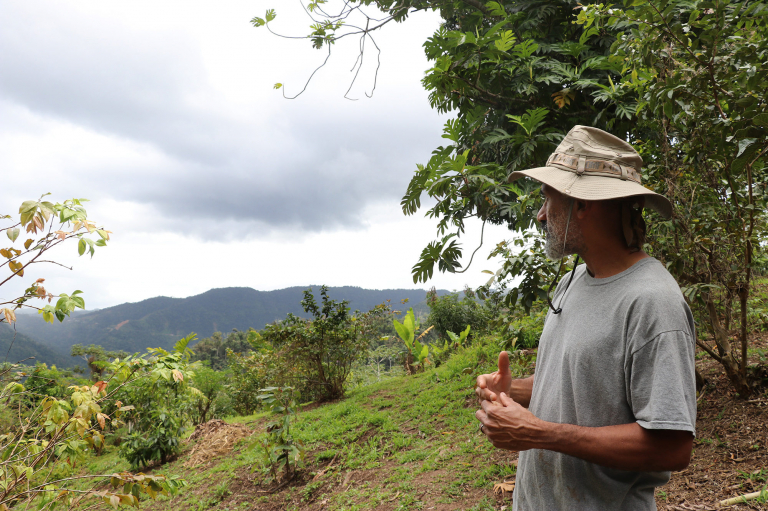 Vegetation is growing back at Mayani Farms after being heavily damaged by Hurricane Maria. Photo by Tina Locurto


Most of the fallen trees are cleared.

The grass is trimmed.

Overgrown weeds and vines are cut and pulled.

With a sigh of relief, Paul said the hardest part of recovery is finally winding down.

“I feel empowered that I can go and finish the job with all the other side projects — it’s not so depressing anymore,” he said.

With somewhat of a clean slate, Paul said he can now rethink things he did incorrectly and plant different crops that will work better for their farm.

They will start with kale, and move on to mustard greens, tomatoes and pumpkins.

For Sarah, Hurricane Maria was a “very defining moment.” She said she put a different emphasis on what is important — and to her, staying in Puerto Rico is important.

Despite the trauma of weathering their first hurricane together, the Ratliffs are more confident that Puerto Rico is the place they are meant to be.

“I don’t know what the end result is going to be, but I felt like whatever it is,” Sarah said, “I’m here with our Puerto Rican brothers and sisters.”

Tina Locurto is a self-motivated senior studying digital and print journalism at Penn State, University Park. She has a double minor in English and history and an expected graduation date of May 2019. Tina rarely stops moving, keeping her days busy with projects, articles and communications work. She currently interns at Penn State Student Activities as a photo and video intern. She simultaneously serves as a feature and investigative reporter at The Daily Collegian. She is also the producer of Collegian Eats, a new weekly food video series at the Collegian.