Madeleine Southern, who goes by Maddy, is a 21-year-old student at The Pennsylvania State University. Studying nutrition, Southern is the typical student at Penn State: attending football games, spending nights in the library, getting all dressed up for a college night out. But aside from her typical college girl image, Southern is what many would call a "gym rat." Unlike typical girls, you can find Southern in a weight room, pumping iron, or making protein shakes to compete in bikini competitions. 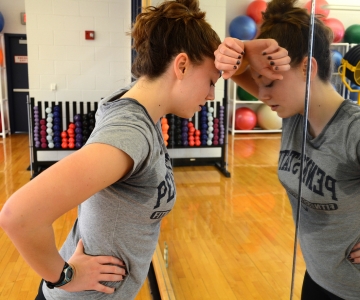 Being an avid athlete her whole life, Southern continued her love of being active when she enrolled at Penn State. After taking a fitness class at the gym as a freshman, Southern was inspired by the fitness instructor and decided to follow in her footsteps and become an instructor as well.  Now as a senior, Southern teaches Full Body Workout, Kickboxing Aerobics and Cycling. Southern has been praised for her motivational workouts by her friends and other patrons in her classes.

Aside from being a fitness instructor, Southern is also a Resident Assistant in the dormitories here at Penn State. She encourages her residents to join her on outdoor workouts which include running up and down stairs Rocky Balboa-style, lunges, squats and burpees. Her attitude is clear in her position as an RA with her countless motivational quotes and posters in her room and in the hallway. Southern is always motivating her residents to come workout with her. While she explains that she understands that many people shy away from physical activity because they are scared, she reassures everyone that it is most certainly worth it. Crediting exercise for her feel-good attitude and confidence, Southern makes exercise a part of life working out five times a week.

Southern’s philosophy is quite simple, work hard to play hard, and by play hard she includes eating the greasy slice of pizza once in a while. Southern as hard as she works does not believe in depriving herself, but does count healthy eating for most of her fitness results.If one day she decides to splurge with pizza or icecream she makes sure to include a salad in her diet the next day instead. Southern hopes to become a personal trainer one day and continue to motivate others to get their bodies to be where they want to be. She specifically wants to work with overweight and unhealthy people in hopes to transform them into the healthiest and best versions of themselves. While becoming a personal trainer is her goal, Southern says she wants to show that girls can train and be just as strong as the boys. Watch out boys.

The Road to a Bikini Competition

When she is not teaching fitness classes, or working out on her own, Southern is preparing for  bikini competitions, which includes vigourous training, strict diet, an intense spray tan and of course an itsy bitsy bikini.

I have goals to be an entertainment reporter or correspondent for Access Hollywood, E! or MTV. Working in radio have perfected my interview skills that will help me be successful in gaining good interviews as well as great stories. While I also love the broadcast field, I have a serious passion for fashion and would also love to do reporting for show on the Style Network as well.

Still preaching at 80: A life of love