Fighting For Her Life; Woman Must Shed Over One Hundred Pounds

Carmelina Valentine has struggled with her weight all of her life.  Her doctors told her that she couldn’t lose a significant amount of weight on her own; she would have to have lap ban surgery or gastric bypass to shed the weight. When that information was given to her she was determine to prove them wrong by working out and eating healthy. 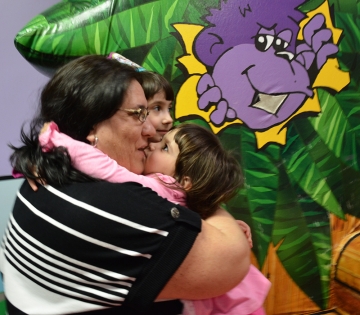 Carmelina Valentine wishing her daughter a happy birthday at her birthday party. Photograph by Brittany Camilo.

Carmelina and her husband, John Valentine have decided to make a first step in changing their lives by becoming challengers for the 21 Day Fix and Shakeology Challenge. It includes clean eating (counting calories), working out to videos, and replacing one meal a day with the Shakeology shakes.

They say they are motivated because of their children. They have two little girls ages three and five. Their weight has affected their abilities to keep up with their children.  Valentine said she was athletic growing up, but now she can’t run around and play with her kids.

Her health problems have made weight an issue for thirty-seven years. “As a baby I was born with Pyloric stenosis which is when your stomach is closed. I was constantly regurgitating and vomiting. At three weeks old I had major surgery, and almost died during those three weeks. They had to take the stomach muscle and connect it to the bile duct, so my food could pass and go in my intestines” Valentine said.

When she was ten years old she started having other issues with her stomach. And when she was older developed hypothyroidism. Valentine says a lot of her weight came on in high school when she had knee surgery her senior year. She played baseball, basketball and even was the captain of her soccer team.  “I even played on varsity as a freshmen, and continued on in college, but once I cracked my knee cap I feel like it was downhill from there” Valentine said.

Valentine also has Polycystic Ovary Syndrome, which only makes it harder to lose weight with hypothyroidism.  “I was actually told by the doctors that I would not be able to have children, and I proved that wrong” Valentine said.

Now she wants to prove to her doctors that she can lose the weight without surgery. “It’s been rollercoaster for me, but in the last probably fifteen years, I’ve never lost the weight, only gained” Valentine said.

Carmelina and John Valentine began the 21 Day Fix and Shakeology Challenge in March. In the first twenty-one days each has lost more than ten pounds, and are continuing to shed the weight.

Video: From Challenger to Coach

Natalie Garcia is the coach to Carmelina and John Valentine for the 21 Day Fix and Shakeology challenge. She not only gives them advice on how to keep up with their diets, but is currently a 21 Day Fix and Shakeology challenger herself. She started the challenge a year before the Valentine’s and saw the result she was desiring instantly. Once she realized she was doing well, she felt she could help others with their weight loss struggles too. That’s when she decided to make a team that included some of her family and friends, such as the Valentine’s.

Garcia says the workout program are ideal since she is a busy mother. She says, they don’t take long and last about thirty minutes, and that after her workouts she feels rejuvenated and ready to take on her day.

Garcia's husband has been doing the challenge with her as well, together they have been successful in their clean eating goals. By being a coach for her friends and family, it helps keep her motivated as well.

My goal after graduation is be working as a reporter for a television station.

Michael Johnson: The Transition from Boat to State