Story posted May 6, 2015 in News, Hong Kong by Lucie Couillard

Loading...
Security cameras cover 70 percent of the public areas in the Chungking Mansions building complex.The images on the screens provide a glimpse into the diversity of cultures housed in the mansion's five 17-story towers.
Video by Lucie Couillard


HONG KONG – Shopkeeper Mahmood Sheik chatted in English to a couple of potential buyers before pausing to take a phone call that he answered in Cantonese. Moments later, he switched to Hindi when a customer stopped by for a quick conversation.

Sheik deals mostly with traders from Madagascar, Mongolia and Cameroon, so he has also picked up a little French, Russian and Turkish. All in all, he said, he has learned five languages since arriving in Hong Kong from India in 1989, when he was 19. 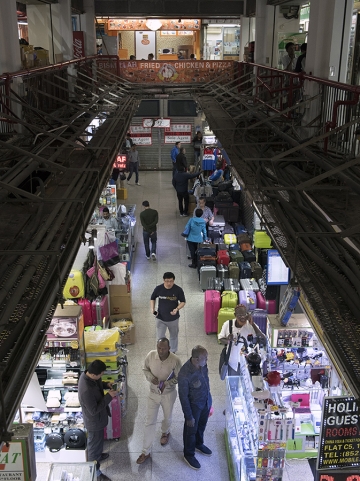 Customers walk through a shopping area at Chungking Mansions on a weekday shortly before closing time. Photo by Lucie Couillard

The manager of a small electronics shop, Sheik is typical of the hundreds of immigrant merchants, shopkeepers, tailors, delivery boys, cooks and dishwashers who make their living in Chungking Mansions, one of Hong Kong’s best known – some would say most notorious – commercial buildings.

A neon-accented cluster of five 17-story towers that is home to a dingy warren of shops, cheap guest houses and tiny restaurants, the building belies the “mansions” in its name. To outsiders aware of its colorful past, Chungking Mansions can seem a sinister and foreboding place -- a symbol of the crime and tensions that come with growing immigrant populations in the city

But to the mostly South Asian and African immigrants like Sheik who make their living here, the entrance to Chungking Mansions can be a portal to a better life.

“If people in Hong Kong feel it’s a hell hole, people in much of the rest of the world feel it to be a fairly wonderful place, a beacon, because you can make a lot of money there,” said Gordon Mathews, a professor and author who lives in Hong Kong and has studied Chungking for years. “So it does represent that, a chance to make a good living.”

The building has had a dual identity since it was built in 1961. Once regarded as little more than a crime-ridden slum, Chungking, located on Kowloon peninsula, has over the past decade evolved to become a point of pride to some Hong Kongers

In the last 20 years, many Hong Kong residents have not wanted to be seen “simply as Chinese.”  Chungking Mansions, which represents a mix of ethnicities and cultures – came to be seen, for some, as a positive sign of the city’s diversity.

“There was a feeling that, ‘We are Hong Kongers so therefore we should celebrate Chungking Mansions, ’ ” Mathews said.

Still, many older Hong Kong residents are reluctant to go into the building themselves or have their children go into it because of decades-old memories of its reputation, Mathews said. 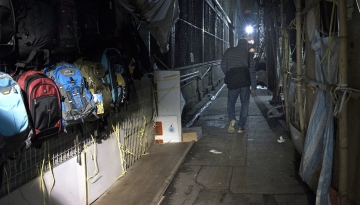 Inexpensive consumer goods are for sale in an alley between Chungking Mansions and a neighboring building. Photo by Lucie Couillard

In the center of the tourist district of Hong Kong, Chungking Mansions houses travelers from around the world selling cheap consumer goods or seeking out living as day laborers. Some are here for days or weeks. Others will stay in Hong Kong for years, continuing to work in Chungking and living in an adjacent neighborhood.

Originally built as housing for Hong Kong residents, Chungking Mansions began to change in the 1970s when Indian and Pakistani immigrants started moving in, said Dennis Cheung, the assistant manager of Chungking Mansions.

Just about 10 percent of the 500 units in the building house permanent residents. Most people in the building are a transient population — mostly backpackers and traders, who stay in guesthouses.

The building’s reputation hasn’t always been the best. In 1993, its transformer room exploded, and the building went through a 10-day period without water or power, Cheung said.

Then came the movie “Chungking Express” by Kar Wai Wong, in 1994 which showed it being overrun with riots. Chungking started being called a place of crime, Cheung said.

But efforts to clean up the building and make it safer have been successful, Cheung said. A former police officer was hired as a senior manager in 1998, and he installed the first security camera in 1999. Now, more than 300 cameras monitor 70 percent of the public area.

These security cameras, along with the 25 security guards that are on shift, assist in investigating crime that happens in the building, Cheung said. Typical crime now, he said, is between the shop owners and traders -- fighting, robberies and thefts. Poor communication is normally to blame in these instances, he said. 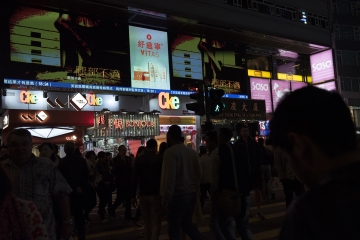 The street is awash with people outside Chungking Mansions on a Thursday night. Photo by Lucie Couillard

Chungking is like a fluorescent light time loop. Outside, men hand out fliers as pedestrians try to navigate the crowded sidewalk. Inside is a world of its own, crowded with men, a cacophony of languages and a perfume of exotic spices.

Jawad Alvi, owner of Alvi Travels, said that like the rest of Hong Kong, Chungking’s focus is business.

Alvi’s family came from Pakistan three generations ago looking for a better standard of living. Forty-five years ago, his family opened the travel shop that deals with China visas, air tickets and hotel bookings. Many of the people Alvi caters to are returning home or going back to trade in India and Africa, and they go to Alvi to buy their tickets.

Chungking has brought over hundred nationalities into one building—between the shopkeepers, traders, tourists and asylum seekers. People from nations known for ongoing tensions work next to each other on a daily basis.

“India and Pakistan basically in the eyes of the world are old foes,” said Alvi, who was born in Hong Kong, and whose family is from Pakistan. “But in this, we have the same language, we have the same eyes, the minds are the same. The religions are different, but the religion is back in the countries. Here nobody cares about the religion. Here we are just doing the business all together.” 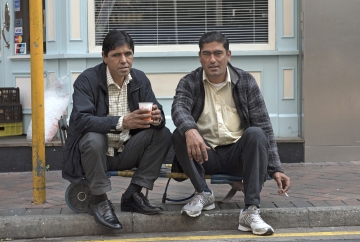 Men sit and talk on a sidewalk behind Chungking Mansions. Photo by Lucie Couillard

On an average day, Pakistani and Indian shopkeepers stand at their shops, making sales and talking while African traders mix into the crowd. Tourists browse the food stalls as backpackers wait for elevators to bring them to the guesthouses.

Chungking has authentic Indian, Pakistan and Arabic food that draws many people, including Hong Kong residents – who find their way into the building more than they used to, said Mathews.

But most locals wouldn’t work there, Mathews said. The work is for traders and shopkeepers, where Chungking is a place that gives them a chance to take money back home. The money made through trading in Chungking has paid for everything from weddings to motorcycles.

Since wages can be higher in Hong Kong for cleaning floors than they are elsewhere for jobs such as teaching, it makes sense to come to Hong Kong.

“Hong Kong means hard work., “ Alvi said with a shrug. “You have to work very hard.”

At the Munisons Co., Sheik talked about the annoyances of being in a setting with a constant stream of people, all coming at him with different demands.

“They say ‘Open this and open this,’ and don’t buy anything,” he said. “We have to be patient.”

But, he said, he believes that he also benefits. He and those around him have had equal opportunities here – and for that, he is grateful.

“Even if you asked me to go back, I can’t,” he said while reflecting on the last 26 years. “I have spent more than half my life in Hong Kong.”